The Chinese connection! Seychelles China Day brings the Spring Festival to the islands 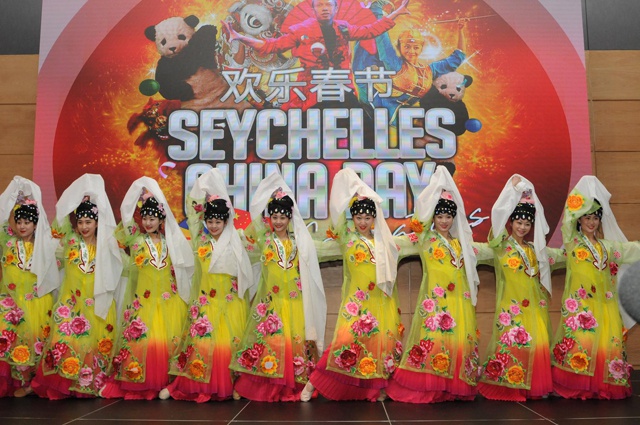 (Seychelles News Agency) - The Eden Bleu hotel, normally more sedate and serene, exploded with a kaleidoscope of colours and sounds as Seychelles celebrated its second annual Seychelles-China Day. The festival, which coincides with the Chinese New Year celebrations, celebrates the cultural and historical links between the two nations.

In a glittering opening ceremony held on Friday night, with dignitaries including the Seychelles President James Michel, the Chinese Ambassador to Seychelles, Yin Lixian, visitors from China and members of the local Chinese community were kept on the edges of their seats by two cultural troupes from the Chinese districts of Shunde and Chengdu.

The Seychelles National Choir which is led by Chinese music professor and voice instructor Xiaoju Lownam  as well as the Lion Dancers - a group of Seychellois dance artists trained by Chinese choreographers - also featured in the entertainment.

Ambassador Yin noted that cultural exchanges between Seychelles and China have played a major role in developing relations between the two countries which she described as "becoming closer and closer" while adding that she hoped the Seychelles-China Day will continue to strengthen the existing ties.

Chinese merchants and traders first arrived in the 115-island archipelago situated in the western part of the Indian Ocean as long as 150 years ago, contributing their fair share to the development of the Creole culture in Seychelles.

The island nation is descended mainly from African slaves freed on the islands by the British, as well as Europeans, Indians and the Chinese.

It is to celebrate and recognise the historical links to China as one of the branches that make up the Creole nation today that the Indian Ocean island nation's Minister for Tourism and Culture Alain St Ange reiterated last night that the first Seychelles-China Day was organised last year.

Today, Seychellois of Chinese origin form part of a large community and are represented are in all sectors of society.

For example the Seychelles first president James Mancham is of Chinese origin, as is the first Seychellois Anglican priest to became Archbishop, French Chang-Him.

May last year saw the demolition of a crumbling 105-year-old pagoda in the Seychelles capital of Victoria, located on the main island of Mahé. Construction began soon thereafter on a new place of worship and cultural centre in the same location, a project that is expected to cost around ten million Seychelles rupees (around $72,000) and is funded by the Chinese and Seychelles governments as well as the local Chinese community.

This year's Seychelles-China Day is being celebrated over 3 days.

On Saturday morning, Seychellois people had the opportunity to experience Chinese cultural foods and traditional products at a Chinese bazaar held outside the National Cultural Centre in Victoria.

Excited locals bought traditional sweets and dumplings and interacted with Chinese visitors who have come to Seychelles for the festival.

On Sunday, the visiting cultural troupe from the Chengdu district of China will be offering an exclusive performance to the public at the International Conference Centre (ICCS) at 3pm.

The Chinese Spring Festival, which marks the passing of the Chinese New Year, is one of China’s most important holiday periods of the year, seeing a colorful cacophony of celebrations in China and in places containing Chinese populations all around the world.

Next week will see the welcoming of the Year of the Sheep or Goat, depending on whose opinion you ask.

China is the fastest-growing inbound tourism market for Seychelles, resulting from the Seychelles Tourism Board’s strategy of focusing on emerging tourism markets to reduce the impact of declining arrivals from more traditional markets in Europe.