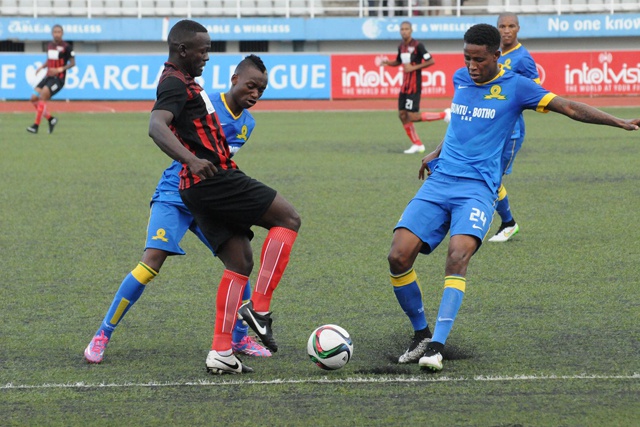 (Seychelles News Agency) - South Africa’s Absa Premier League champions the Mamelodi Sundowns might have come to Seychelles as the favourite, but they were given quite a scare on Saturday in the preliminary round of the Confederation of African Football CAF’s African Champions league match.

The Seychelles defending Barclays League Champion St Michel managed a 1-1 draw against the South African club in its home match played at the island nation’s main stadium – ‘Stad Linite’ on the outskirts of the capital of Victoria.

The predominantly quiet bunch of football fans that had come down for the match who were holding their breath in anticipation initially, eventually started to believe in victory, as the visitors side ran out of ideas on how to breakdown St Michel’s defense and resolve.

The belief was boosted some 20 minutes into the second half when in spite of having only 10 players after Leeroy Coralie’s expulsion at the start of the second half for a second bookable offense, St Michel’s Gervais Waye-Hive scored the first goal of the match.

The one-man short, St Michel, reinforced its defense smelling a big upset, as the goal changed the complexion of the game. Sundowns began to show signs of a team with the kind of reputation that preceded them to Seychelles.

Suddenly they were everywhere and made camp at St Michel’s half, looking most likely to score each time the ball was thrust forward.

St Michel, more than 10 times Seychelles football champions, were clearly struggling defensively in the final minutes of the match while the visitors hit the woodwork three times knocking for an equaliser.

After staring defeat in the face until the latter stages of the first leg of the preliminary round of the African Champions League encounter, the South African side breathed a sigh of relief in the 83rd minute its Zimbabwean player Khama Billiat scored a sensational volley from just inside the penalty area on the left, to cancel out Waye-Hive’s opener.

Stunned, St Michel’s players had to dig deep into their reserves to prevent defeat. Players and fans alike jumped in wild jubilation as the final whistle was blown, as if they had scored a win.

Mamelodi Sundowns’ coach Pitso Mosimane was full of praise for St Michel after the encounter, noting that their opponent played a good match.

“How do you not lose a match when you hit the post three times in one-half?” he asked, trying to make sense of the host of goal scoring opportunities his players failed to convert.

“It is clear to see they (St Michel) are the champions” he said, adding that “If there is player who deserves to be the man of the match it should go to their goalkeeper, he kept us out quite admirably”.

Asked if they held back due to, not knowing their opponent’s strength, especially in the first half when they failed to threaten St Michel’s goal, coach Mosimane insisted that they played at their level best, but that they were up against a very good team who should be congratulated.

For St Michel’s Manager, Andrew Jean-Louis, the draw was seen as a victory adding that the Sundowns had a “lucky escape”.

“If it was not for bad refereeing, which ended in an eventual red card for us, victory would have been ours,” he alleged.

“But we are very satisfied with the draw, we played against a top team from the continent and we held our own. In doing so, we have once again kept our tradition of doing our country proud”.

St Michel will play the return leg of the preliminary round African Champions League against the Mamelodi Sundowns on March 28 at the Lucas Moripe Stadium in South Africa.

Meanwhile, in another African Club Football match played in the Seychelles on Saturday this time at the Amitie Stadium on the archipelago’s second most inhabited island of Praslin, the home team - Cote d’Or went down 2-3 against the visiting Dedebit from Ethiopia.

Runner-up of last year’s Seychelles Barclays league Cote D’Or was playing the first leg match of the Confederation of African Football CAF’s preliminary round of the 2015 Confederations Cup.

The home team took a 1-0 lead after the first minutes of play but fell back 1-2 early in the second half as the visitors scored twice in quick succession in the opening 15 minutes.

“Dedebit made a tactical substitution early in the second which confused the local side who was already nervous due to a lack of experience playing at this level,” said Cote d’Or’s Malagasy Coach Ahmed Abdou.

“We failed to regroup and went on to concede a third gold before pulling one back in the final 15 minutes which was not enough,” he said regrettably.

As it stands qualification for the next round is looking rather bleak for the home side who will have to score twice in the second leg in Addis Ababa in a fortnight, without anticipating any response from Dedebit.

Coach Abdou is not convinced qualification for the next round of the competition is out of reach though, implying that anything in possible in a football match.

“We should not approach the match with pessimism. Sundowns were large favourite to win against St Michel and the match ended in a draw,” he pointed out.

Abdou admitted however that they could have made life difficult for their opponent, had they snatched up a chance to score a second goal just before half-time during Saturday’s encounter.

“But the players were playing timidly and conceded possession just when we were about to score.”

The coach was nevertheless full of praise for the fans, noting that they created a good atmosphere at the Amitie Stadium at Grand Anse.