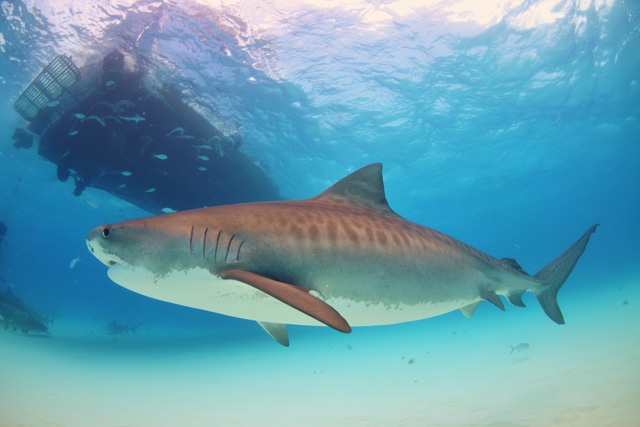 Tiger Shark (Albert Kok/Wikimedia) One of the 19 shark species which will be protected in Madagascar's first Shark sanctuary. Photo License: (CC BY-SA 4.0)

(Seychelles News Agency) - The Indian Ocean island of Madagascar is considered to be rich in biodiversity, boasting lemurs, baobabs, rainforest, beaches, desert, as well as a multitude of smaller islands off the country's main coastline and pristine marine reefs.

Antongil Bay, which is the largest along the eastern coast of the Indian Ocean island measuring some 2,300 square kilometres is considered of national importance to the country of around 22 million people.

The vibrant marine life of the bay boasts a high concentration of pelagic fish, a flourishing cetacean population especially of humpback whales and several species of sharks, among other important species which make up the area's marine biodiversity.

With a high density of the Madagascan population living on the coast and directly involved in artisanal and small- scale fishing, the government of Madagascar is taking steps to ensure that there is a balance between fishing activities and the sustainable management of the resources found at Antongil Bay.

The Madagascan Ministry of Marine Resources and Fisheries is working together with a US-based organisation, the Wildlife Conservation Society (WCS), which manages national and international conservation projects, research and education programmes to implement a management plan for the bay.

To this effect, a new law came into force earlier this month to allow the community of the Antongil Bay to locally manage their own marine resources with the implementation of several measures, such as a temporary closures and bans on fishing in demarcated areas.

Another key element of this law is the prevention of shark fishing in the bay to protect the different shark species from imminent wipe-out, especially when it comes to endangered and vulnerable species such as the great hammerhead shark, the zebra shark, tiger sharks and the grey fin shark.

According to a statement published by WCS the first shark sanctuary has been created providing home to some 19 shark species. The existence of a little over 33 percent of the different species is thought to be threatened due to unregulated fishing.

The new law and all the measures it entails appears to have been well-received by the locals.

"It will limit the number of small-scale and industrial fishers allowed to fish in the bay," Venor Rason, a local fisherman from the southern part of the bay was quoted as saying by the WCS.

As part of the management plan, local fishermen are also expected to receive fishing licenses while international boats will be barred from fishing in the area.

"Through this law, the country is opting for a balance between fishing activities and ecological integrity to ensure rational and sustainable exploitation of fisheries resources,” said Sem Ahmad, the Madagascan Minister for Marine Resources and Fisheries.

The project to better manage the fisheries resources of Madagascar's Antongil Bay is being viewed as a model that can hopefully be replicated in important sites.

In the past overfishing in Madagascar has resulted in the over-exploitation of several marine species, and according to the Marine Technical Director of WCS’s Madagascar Programme, Dr. Ambroise Brenier, the new measure will bring many benefits such as the reduction of coral reef degradation, more abundant endangered species of sharks, and sustainable fishery yields.

Antongil Bay is the latest of twenty-five locally managed marine areas or LMM located on land or in the sea which have been set up around the country.

Some other areas of high biodiversity importance that are expected to be given priority in the near future include the Makira Natural Park, Masoala National Park, Nosy Be and Toliara areas.