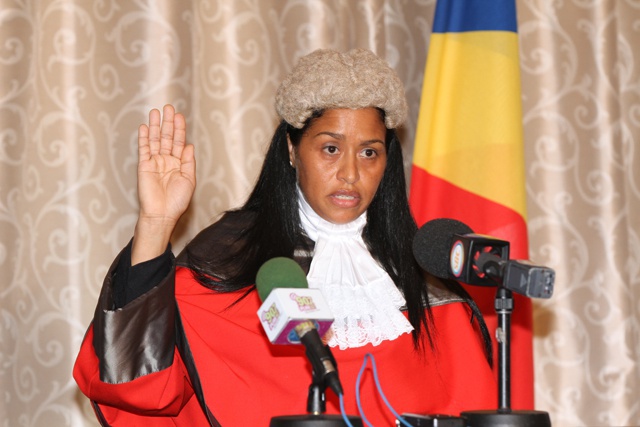 Govinden was sworn into office at State House in the Indian Ocean archipelago’s capital of Victoria in the presence of the Seychelles President, James Michel.

According to a statement issued by State House this afternoon, her appointment by Michel as a Puisne Judge was "on the recommendation of the Constitutional Appointments Authority”.

“President Michel expressed his congratulations to Judge Govinden and noted that her expertise would undoubtedly contribute to the improvement of the Seychelles judiciary,” reads the statement.

Govinden, who is married to the Attorney General, Ronny Govinden, is now the second Seychellois female judge serving in the Supreme Court alongside Judge Fiona Robinson who was appointed in January 2013.

The newly-appointed judge graduated with a Bachelor of Laws with Honours from the University of Mauritius, where she also completed her bar before returning to Seychelles in 2001.

Her career, since joining the legal profession spans several posts, namely State Counsel, Senior State Counsel and Registrar General - all within the Department of Legal Affairs.

In 2006, Govinden was appointed as a magistrate and then as a senior magistrate two years later in 2008.

Until her recent appointment as Puisne Judge, Govinden was also presiding over the Juvenile Court and the Rent Board, and she is also the Vice-Chairperson of the Family Tribunal

Speaking to the local press after taking her oath of allegiance this morning, she described her appointment as a 'proud and happy moment' in her career, adding that she felt her appointment responded to the aspiration of the Seychellois public as well as the legal profession.

The 42-year-old recently enrolled on a Master’s Degree course where she is specialising in family law.

Nevertheless, she says that while serving as a magistrate over the last nine years she had dealt with both criminal and civil cases while also dealing with cases involving children. Finding that she had no particular preference between them, she said she was therefore ready to deal with any cases allocated to her by the Acting Chief Justice.

“I feel very proud as a Seychellois to be part of the judiciary and to discharge my functions as a judge of the Supreme Court. I am looking forward to any challenges and I hope I would deliver as well as I have done in the past in the post of magistrate,” Govinden told journalists.

Samia Govinden becomes the 9th judge of the Seychelles Supreme Court. She is also the third female Seychellois judge to join the judiciary alongside her colleague of the Supreme Court judge Robinson and Mathilda Twomey, who is a judge of the Court of Appeal.