Living on the edge: Conservationists helping the Seychelles sheath-tailed bat to fight for survival 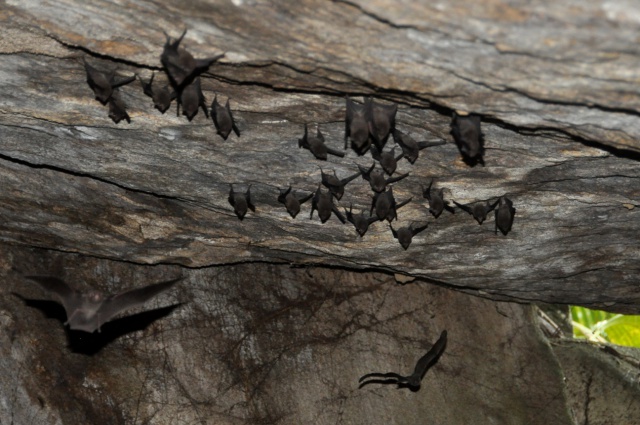 (Seychelles News Agency) - Somewhere in a low lying area not far from the coast of the Seychelles third largest island of Silhouette, amid ferns and endemic plants, a group of bats cling upside down on granite boulders in a cave, well-hidden from the blazing heat of the equatorial sun.

This may seem like a typical bat habitat on one of the islands of an Indian Ocean archipelago reputed for its efforts to preserve its flora and fauna. However, there is something incredibly special about the eerie cave - it provides the only home to one of the world’s rarest types of mammal, the Seychelles sheath-tailed bat (Coleura seychellensis).

These small bats, which can be distinguished from other bat species by the sheath that can be found between their hind legs, are listed as critically endangered on the International Union for Conservation of Nature (IUCN)'s Red List of Threatened Species.

It is believed that less than a hundred of these bats, commonly known by locals as ‘sousouri bannann’ in the native Creole language, exist in the world. Endemic to Seychelles, they can only be found on Silhouette Island and in the Cap Ternay and Anse Major areas in the southern part of the main Seychelles island of Mahe.

A treasure of Silhouette Island

It is no surprise therefore that the habitat of the Seychelles sheath-tailed bat on Silhouette, which holds the largest population of 30 individuals remains undisclosed and accessible only to a selective group of people, which includes three rangers working for the Island Conservation Society, ICS.

The team, headed by Angela Street, who hails from Nova Scotia in Canada, have been conducting regular visits to their ‘tiny protégés’ since 2013 in a bid to learn more about the species and find ways to veer this tiny population away from the edge of extinction. The small colony is surveyed night and day using a special surveillance camera purchased through funding from various organisations.

“Silhouette Island hosts what is considered to be the best managed or less disturbed sheath-tailed bat roost in the country and, therefore in the world. 30 individuals were documented during the last census, which may also make this the largest roost in the world,” Angela Street told SNA in an e-mail interview.

She adds that this endemic species “has not been studied intensively enough to make an accurate comparison between them and the 50 or so worldwide species of sheath-tailed bats.”

Over the last 30 years since the species were recorded in Indian Ocean archipelago of 115 islands, its population in different roosting sites have continuously depleted and on some islands such as Praslin and La Digue, the second and third most populated island of Seychelles, they have become insignificant or have disappeared altogether.

In spite of serving as protection for this tiny colony Street says Silhouette, which is managed by a parastatal company, the Seychelles Island Development Company (IDC), still holds some unforeseen dangers to the bats, particularly from humans.

The island has recently seen an increase in its local population due to the presence of a luxury hotel there.

“They also have other threats from predators, most of which including rats can transmit disease to them".

Speaking to SNA, the manager of the island, Gilbert Esparon, confirmed that sightings of the endemic species were more common in the latter days.

“I haven’t been here for a long time but those who have lived on the island much longer often talk about the bats living on the roof of their houses, even in the old chimney of the copra house. In the old days, the bats were found in at least three other locations on Silhouette,” stated Esparon.

Compared to the much larger, Seychelles fruit bat (Pteropus seychellensis), the Seychelles sheath-tailed bat has been unable to populate the granitic islands of the archipelago.

Affirming archive documents of previous monitoring programme carried out by local residents and the Nature Protection Trust of Seychelles an NGO that has done a lot of work to preserve the species and environments of the Seychelles islands through practical conservation, research and publication, Street confirms that death rates among this already endangered population have exceeded birth rates.

“Over the past 30 years or so, a slow but steady decline has been observed on Silhouette, with roost numbers falling from a high of 40 to a low of 23-25, now hovering around 30.”

ICS has already put in place several measures to try and save the 30 bats precariously living on Silhouette.

These include an awareness campaign to prevent the over-usage of pesticides commonly used to control mosquitoes, which could reduce the population of moths, beetles and other insects that the bats feed on.

“We are also in the process of building Silhouette’s native plant garden, which was started many years ago. The 'garden' is located in the middle of the forest and is a hybrid of forest ecosystem and botanical garden. It features over 30 species of indigenous trees, shrubs, and other plants…” says Street, who adds that they are expecting native insects to flounder to this new habitat which might in turn can provide more food to the bats and catalyst their survival.

But are these measures enough to save the Seychelles sheath-tailed bat?

There is no sure answer, but Street says they have tightened their efforts towards the small population of one the rarest mammal on earth to ensure its survival.