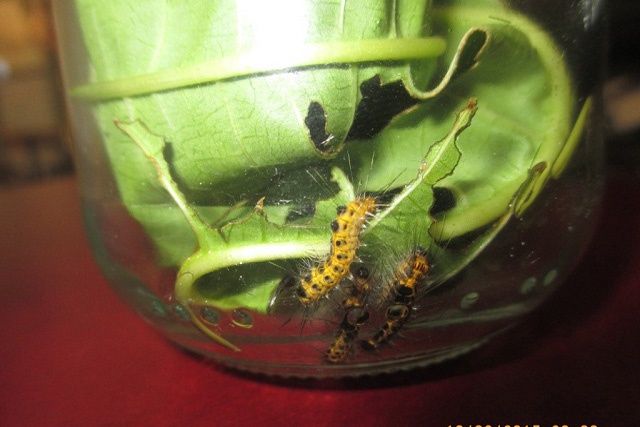 A couple of the yellowish-black caterpillar captured in a jar. (Seychelles News Agency)

The authorities in Seychelles are trying to identify a new caterpillar species that has been observed for a couple of weeks in several regions of the Indian Ocean archipelago.

The yellowish caterpillars that have black spots and are covered in hairs have been spotted mainly in the northern and central region of the archipelago’s main island of Mahé with people developing skin rash after coming in contact with the stinging hairs. The island nation’s health ministry says though it may last several days the itchy rash is treatable using antihistamines.

Contact with the stinging hairs can also lead to inflammation of the eyes and respiratory systems.

Instances of people developing such allergic reactions especially the rash have been reported at different health centres across the country but it has not been possible for SNA to confirm the number of such cases as these statistics are still being compiled by the Ministry of Health.

According to the Director for Plant Protection at the Seychelles Agricultural Agency, Randy Stravens, the presence of the insects has now also been confirmed on the second most populated island of Praslin and that they are monitoring the other islands as well.

It is believed that the caterpillar in question hails from the ‘Euproctis genus’ more precisely the ‘Euproctis fraterna’ according to a Seychellois Agronomist Bob Petrousse who also works at the Agricultural Agency’s plant health diagnostic laboratory.

But this still this needs to be confirmed.

“We already have adult samples of the caterpillar that have been reared in the laboratory which will be sent overseas for confirmation as to what type of species we are dealing with,” said Petrousse.

The samples are expected to be sent the French administered Indian Ocean island of Reunion this weekend, to be analysed by CIRAD, a French research centre working with developing countries to tackle international agricultural and development issues.

Samples are also expected to be sent to a few other reputed overseas laboratories.

Petrousse told SNA that so far the caterpillars have mainly been spotted on castor bean plants locally known as ‘tantan’, but also on other plants like Indian almond, grenadines and golden apple trees as well as other exotic plants.

“We have the impression that the caterpillar has been around for a while, but it was not being disturbed,” said Petrousse.

“As a result of human or climatic activities its habitat has been disturbed and that is what is causing people to have contact with them and developing allergies.”

The Division of Risk and Disaster Management, DRDM, is coordinating efforts to tackle the spread of the pest.

“Since last week we have been meeting on a weekly basis. We have developed a coordinated action plan with all agencies having their specific responsibilities from the Ministry of Health, the department of environment, agricultural agency, as well as the Ministry of Education as some schools have been most affected,” DRDM’s Director General Paul Labaleine told SNA.

According to an article published today in daily newspaper Seychelles Nation, 9 schools have reported to have faced caterpillar infestation with Mont Fleuri Secondary on the outskirts of the capital of Victoria being most affected. The school was closed for one and half days for fumigation purposes.

Technicians of the Agricultural agency are undertaking inspection and surveillance activities as and when new cases of the caterpillar being spotted are reported to advise people on what is the best course of action.

“We have also developed an emergency plan to ensure that it does not become an agricultural pest to prevent a situation where it can be a threat to agricultural crops,” said Petrousse.

Farmers are being advised to use insecticides to destroy the pest if spotted on their farm and to get rid of the infested plants while the general public is being asked to seek the advice of the relevant authorities and to get competent people to deal with the pest.

Taking a shower and changing clothes, washing clothes in hot water and avoid scratching if a rash is developed are some of the advice given by the Ministry of Health to people that may come into contact and get infected by the yellowish-black insect.