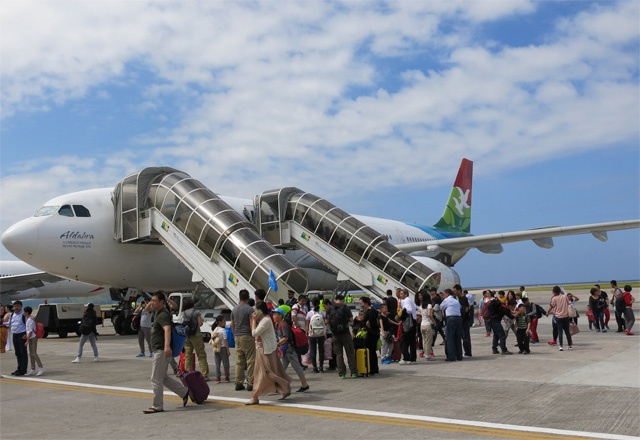 The first of two additional flights from Beijing to Seychelles via Abu Dhabi arrived on Friday, 20 February. The flight was operated at full capacity with 254 passengers (Air Seychelles)

They landed at the Pointe Larue International Airport at 2.15pm local time onboard an Air Seychelles flight travelling from Beijing via Abu Dhabi.

This is the first of two additional flights the Seychelles national airline has added to its schedule to bring in Chinese tourists as they celebrate this year’s Spring Festival.

According to a press statement issued by Air Seychelles today, the airline has teamed up with its strategic partner, the United Arab Emirates' Etihad Airways and Caissa Touristic, one of China’s largest travel agencies for chartered flights.

“Two round trips will be offered during this peak travel period to cater to the strong demand from China, the fastest-growing tourism market to Seychelles for the last three consecutive years,” read the statement.

The second flight is expected in the Indian Ocean archipelago on February 27.

It was announced in November last year that the agency was interested in chartering its own flights to bring tourists in for non-stop flights from Beijing by October 2015, but for now it seems the company has partnered with Air Seychelles and Etihad Airways to fly Chinese tourists from Beijing to Abu Dhabi and then connecting to Seychelles.

The two Etihad Airways operated flights to and from China is using an Air Seychelles A330-200 plane that can carry 18 passengers in business class and 236 in economy.

Air Seychelles was established in 1977 and adopted its present name in September 1978. Between 1978 and 2012 it was wholly owned by the Seychelles government but in 2012 the UAE's Etihad Airways bought a 40% share in the airline, investing $45 million in Air Seychelles.

The year 2014 saw a record number of 13, 349 visitors from China, which is now considered as one Seychelles' main emerging markets for inbound tourism.

According to the NBS figure which accounts for visitor arrivals up to February 15, China is currently the fourth leading market after France, Germany and Russia, despite recording a 54 percent decrease when compared to the same period last year.

In a recent interview with SNA, the Seychelles Tourism Board’s Chief Executive Officer Sherin Naiken was optimistic that the figures will be increasing especially over the spring holiday period.

“We offer the opportunity for a relaxing island holiday with pristine beaches and year-round sunshine. Strong demand is expected during the Chinese New Year holidays, and these flights will provide extra capacity to serve this surging market,” noted Naiken following the arrival of the Chinese tourists this afternoon.

According to the Indian Ocean archipelago’s national airline’s Chief Executive Officer, Manoj Papa, the additional flights are expected to inject over $1 million into the Seychelles economy over the coming two weeks.

For Papa, the flights also represent “a unique opportunity to introduce the Air Seychelles’ brand in mainland China", in partnership with Caissa Touristic, a Chinese tourism enterprise with offices not only in China's main cities of Beijing, Shanghai and Guangzhou but also in Frankfurt, Paris and other major cities around the world.

The President of Caissa International Travel Service, Chen Xiaobing, said that the additional services being offered to Seychelles "have attracted strong demand and the flights will deliver nearly 500 Chinese visitors to the Seychelles during the Chinese Spring Festival."

"There is definite potential to grow the market with additional services in the coming years," he added.