New body sets out to boost science and technology in Seychelles 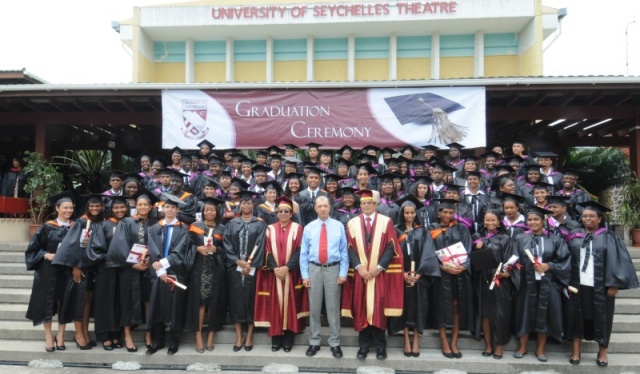 Second batch of students who graduated in November 2013 from Seychelles' first University. Unisey is also set to benefit from NISTI (Seychelles Nation)

(Seychelles News Agency) - A new body has been set up in Seychelles to coordinate organisations keen to use science, technology and innovation to give them an edge in business.

The Indian Ocean island nation’s National Institute of Science, Technology and Innovation was established after the archipelago’s Vice-President Danny Faure successfully tabled a bill for its setting up in the country’s national assembly on April 2.

‘The government believes time has come to give science, technology and innovation their rightful place in our society,’ Faure told members of the assembly, who unanimously approved the law to set up the institute.

NISTI is expected to play a leadership role in the economic sector by coordinating between the various sectors including the business, industrial and the different arms of government.

‘Businesses and industries also firmly believe in innovation and the use of new technologies to develop and exist in a competitive world,’ said Faure, naming the country’s soil testing laboratories and the Seychelles bureau of standards as some of the organisations that will benefit from NISTI.

Educational institutions like secondary and post secondary schools as well as the country’s university will also get a new impetus through the institute, Faure said.

Lead consultant Xavier Estico, who has been helping set up the institute told the SNA that NISTI is autonomous and will be working under the patronage of the country’s President in his capacity as the chancellor of the University of Seychelles.

‘It will be the umbrella body for all academic, professional associations and individuals for the development, dissemination and promotion of science, technology and innovation,’ he said, quoting from NISTIs published goals and objectives.

He said NISTI will help put in practice new technologies to projects that are relevant to government’s development agenda and contributing to give Seychellois a better quality of life.

NISTI’s published strategic goals are to contribute and benefit from national, regional, continental, international and global pools of scientific knowledge and technological innovation that will facilitate the nation’s global participation and cooperation.

The new body also aims to streamline and advise government on policy formulation and all other matters relating to science, technology and innovation, on its prioritisation, general planning, coordination and research activities, while ‘demystifying technology, science and innovation by promoting public understanding and awareness and meaningful participation in these disciplines’.

NISTI is also charged with the duty of pooling resources for scientific research, technological development and innovation within the country, and establishing a science network consisting of students, researchers, educators, and research professionals.