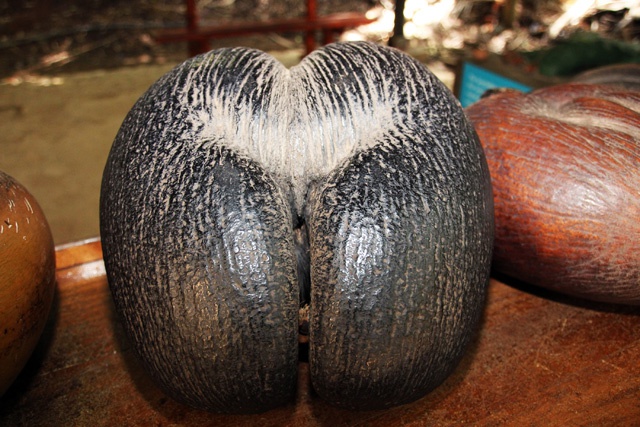 A mature Coco-de-Mer nut is a prized possession for tourists coming to Seychelles, selling for between $450 and $750 each. (Romano Laurence, Seychelles News Agency)

(Seychelles News Agency) - The Seychelles Minister for Environment, Energy and Climate Change, Didier Dogley, has said that measures to clamp down on poaching of the iconic Coco-de-Mer nut should become a high priority for the government of the Indian Ocean archipelago as well as the six thousand or so people living on Praslin island.

“The situation is very alarming. We have people now just simply cutting down trees or cutting anything that they find [on these palm trees], which means that even the smallest bud that could have developed into a full nut years later and have some kind of value, is being destroyed just so someone can have a few thousand rupees,” said Dogley.

The minister was speaking to SNA following a meeting with private owners of Coco-de-Mer trees and authorities involved in the conservation and protection of the rare and vulnerable endemic nut.

To the chagrin of environmentalists, in recent years, incidents of poaching have continued to be on the rise on Praslin Island, the second most populated island of the Seychelles archipelago, situated in the western Indian Ocean.

Only last month, the Seychelles National Park Authority (SNPA), recorded its first incident of poaching for 2015 in the Fond B’Offay area, a few kilometers from the UNESCO World Heritage Site of Vallee de Mai.

In the latest incident, 18 of the Coco-de-Mer nuts, world-renowned as the largest nuts in the world, were recovered by authorities after they were severed from their parent tree prematurely. The culprits of the brazen poaching attempt were only remanded in the Seychelles Police custody and later released.

Taking it to the next level

Praslin and the neighbouring island of Curieuse are the only places where the Coco-de-Mer palm grows naturally, and it is estimated that there are just nine thousand of these endemic palms growing in the Seychelles archipelago.

A mature nut is a prized possession for tourists coming to Seychelles, selling for between $450 and $750 each. The immature nuts are also considered as a rare delicacy among certain islanders while in some Asian cultures it is rumoured to be a powerful aphrodisiac.

However, eyebrows were raised among conservation experts and locals alike last year when a Coco-de-Mer culinary festival was initiated to promote the use of the ‘forbidden fruit’ in foodstuffs.

The rise in demand over the years has put pressure on the slow-growing Lodoicea maldivica, which takes between twenty to thirty years to produce its first bunch of nuts, leading conservation experts to list the Coco-de-Mer on the red list of the International Union for Conservation of Nature (IUCN).

Several landowners have voiced their concerns to Dogley on the rapid decline in the number of mature nuts being collected on the island, including the two biggest caretakers of Coco-de-Mer trees on the island; the Vallee de Mai, which is managed by Seychelles Islands Foundation (SIF), a public trust established in 1979 and the privately-owned Fond Ferdinand, which is managed by Le Ravin de Fond Ferdinand.

“We need to review the existing coco-de-mer decree. It was last reviewed in 1994, but certain provisions with it especially as far as offences and penalties are outdated, so we need to review those as quickly as possible,” says Dogley, adding that a team would immediately be put to task to work on this review using best practices used in other countries.

“There are transactions of the coco-de-mer that are being done without going through the proper procedures established by the law… people are not declaring the number of female trees and nuts that they have every year, even if they are obligated to do so…” he continued.

The Ministry has also been reviewing the system of applying a more sophisticated tag on sold nuts which allows tracing of each Coco-de-Mer until they leave the country, but this has yet to be finalized and Dogley says it is imperative that this is done at the earliest.

A special task force has also been set up on Praslin island to facilitate the exchange of information and better coordination between all stakeholders in an effort to curtail the poaching.

The new minister, who was appointed by the Seychelles president earlier this month, was however reluctant to evoke a total ban on the nuts, stating that “any measures taken will be weighed carefully for the long term benefit of everyone that is directly or indirectly benefiting from this unique natural resource.”