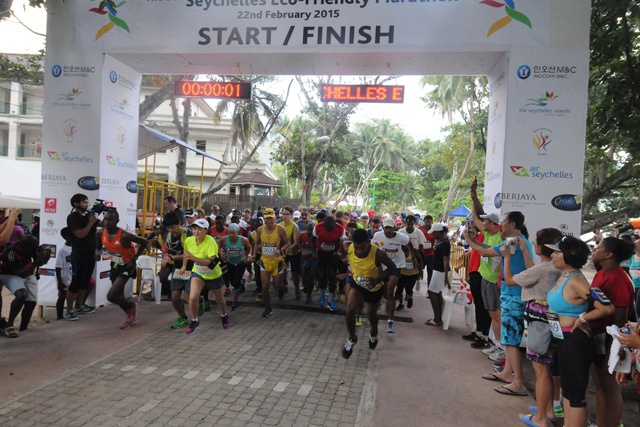 (Seychelles News Agency) - Kenyan runners dominated the Seychelles 8th Eco-Friendly Marathon on Sunday claiming the three top spots on the men’s side at the end of the 42 kilometre race.

Shadrack Tanui won the marathon clocking 2 hours 38 minutes and 22 seconds ahead of Paul Simbolei who ran the 42 kilometres in 2 hours 45 minutes and 25 seconds while Moses Mbugua clocked 3 hours 8 minutes and 48 seconds to finish third.

28-year-old Tanui who was participating in the Eco-Friendly Marathon for the first time said the race was tough highlighting the humid condition and the grueling hill climb which he said drained him at a crucial stage of the race.

But he was nevertheless happy with the win and has promised to run faster the next time he takes on the eco-friendly challenge.

In 8 years, Tanui has become only the third winner of the Seychelles Eco-Friendly Marathon after Seychellois James Barra who won in 2012 and Simon Labiche who has won all six other races including last year’s.

Labiche who took part in the race on Sunday chose not to run the full marathon this year.

He said it was due to a niggling injury and him not being in the right frame of mind after losing a loved one not so long ago.

Labiche was eventually the winner of the 10km race in the 40+ category.

On the women’s side Finnish national Mari  Kauri, won the 2015 marathon in 3 hours 46 minutes and 30 seconds.

According to the organizers some 2,800 runners including locals as well as international participants from Kenya, Finland, South Korea amongst others took to the starting line at Beau Vallon, northern district of the Seychelles main island of Mahé on Sunday.

Apart from the marathon participants ranging from children to adults could walk, jog or run the half-marathon (21 kilometres) or the shorter 5 and 10 kilometre races with many opting to either run or walk the 5km course.

The winners were presented with their prizes during a ceremony held at Berjaya Beau Vallon Bay Hotel on Sunday evening.

The Seychelles Eco-friendly marathon which started in 2008 is the initiative of Seychelles honorary consul general in South Korea, Dong Chang Jeong who also heads the Seychelles tourist office there, in an effort to contribute to the health of Seychellois.

Since the annual event was launched in 2008, it has seen an increase in the number of participants from different countries, notably from Asian countries such as South Korea.