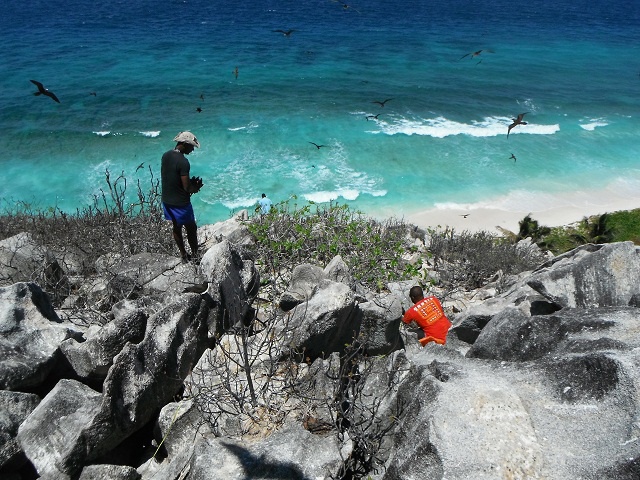 The eradication programme can pose logistical challenges to the conservation team planting tubes of poison on the wild and breathtakingly beautiful island of Aride, which has become threatened by an invasive species of ant, Pheidole megacephala (Island Conservation Society)

(Seychelles News Agency) - Aride Island is considered as the fortress of seabirds in the Indian Ocean – it is estimated that millions of seabirds breed on the 68-hectare island and its colonies of lesser noddies, roseate terns and tropical shearwaters are the largest in the world.

The northernmost granitic island in the Seychelles archipelago of 115 granitic and coral islands, Aride is located just ten kilometres north of the second largest Seychelles island of Praslin. Entirely protected as a nature reserve, it is inhabited only by a small handful of conservation officers.

With such a high density of birds, competition for food is high among insects and amphibians, including a large population of oversized lizards, but recently, a new competitor has been dominating this ecosystem; the big-headed ant.

These Pheidole megacephala, distinguished by their disproportionately large heads, are listed by the Invasive Species Specialist Group among the 100 worst invasive species in the world with a litany of disastrous effects on ecology and agriculture in a number of countries.

“The big-headed ant was first identified [on Aride] in 2010 and its population was restricted to low lying areas and the plateaus but following a recent inspection, it was clear that these species were taking over from other local insects, attacking them whenever necessary and devouring anything that they can find from eggs to new hatchlings to invertebrates on the island,” said Melinda Curran, a conservation officer on Aride.

The extermination of a notorious enemy

With the help of students and volunteers, the Island Conservation Society, which leases and manages the pristine island, has pulled on its fighting gloves against these omnivorous ants in an aggressive extermination campaign.

Finding these tiny invaders is a tricky business, Curran told SNA, and hence instead of targeting their bastion, poisonous bait is inserted in tubes and deposited across every possible portion of the island, earmarked as a Nature Reserve by the Seychelles government since 1979.

The versatile insects are known to adapt to difficult environment and can build their colonies through a rigid social system that relies on a single queen to reproduce and populate.

The campaign is therefore a hands-on situation, which requires the frequent removal of bait and monitoring of potential cases of secondary poisoning, especially among the giant millipedes found on Aride.

“This is unfortunate but it can happen. Cockroaches, for example, can get poisoned during the eradication programme and they are important in the ecosystem of the island as they are fed upon by the Seychelles Magpie robin,” said Curran, who added that supplements are being provided in the meantime to ensure that these special birds have enough food.

Prior to the eradication programme, the invasive big-headed ant, which lay thousands of eggs at a time all year round, were observed in an area covering more than six hectares of land.

“We are almost half way through the programme, although it is difficult to assess our progress, as we don’t know how many ants there were,” says Curran. “We only know that their population was moderate and concentrated on the plateau areas.”

The big-headed ant, a native of Southern Africa, could have been transported to the archipelago in the 70’s and 80’s on board trading ships.

Ranging from pale yellow to dark brown, they rely on their super-sized heads and jaws to overpower smaller native ants, something which has been observed on populated islands of the Seychelles such as Mahé and Praslin, as well as other smaller and almost uninhabited islands such as Cousine.

The invasion comes in spite of strenuous efforts from ICS to prevent invasive species from establishing populations on Aride.

Boats or yachts are moored far from the beach and visitors are only allowed to disembark using ICS facilities.

Moreover, upon arriving on the island, the rangers of the island go through a process of the careful inspection of belongings to prevent unwelcome invaders from entering the nature reserve.

“It is almost impossible to keep an island clear of alien species if there are regular visitors. From their shoes they can carry seeds, bags can carry small insects, food might carry germs, etc… They are not visible with the naked eye but they can have disastrous effects on such a fragile ecosystem,” said Uzice Samedi, the ICS island manager on Aride.

Samedi also told SNA that after careful explanation and education, visitors understand the reasons behind the strict vigilance, the careful scrutiny and the long list of prohibited items, which includes carton boxes and wood, which can easily allow alien species and tiny invaders to sneak in undetected.

With the seabirds’ breeding season slowly approaching, the calls of newly-born chicks will soon resonate on Aride and with the big-headed ant taken out of the equation, it is hoped that another successful season lies ahead.