Emirates Group hotel development at Cap Ternay will not go ahead, says Seychelles President in State of the Nation address 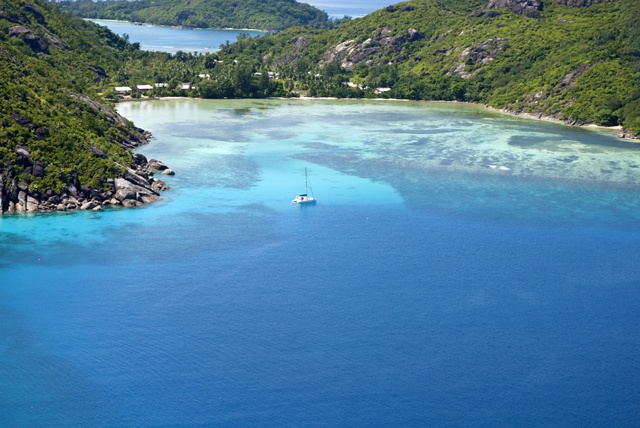 View of the Bay at Cap Ternay where the Emirates' Cap Ternay Resort was to be built. (Gerard Larose, Seychelles Tourism Board)

(Seychelles News Agency) - A major hotel development proposed at Cap Ternay on the western coast of the Seychelles main island of Mahé will not go ahead, the archipelago’s President James Michel announced in his State of the Nation Address before the National Assembly this afternoon, citing “environmental protection reasons.”

The Cap Ternay Resort project intended for the Dubai-based Emirates group was first announced in 2007.

The $253 million tourism development project has been subject to much resistance and criticism by local citizens, politicians and conservationists alike over the years due to the size of the proposed project as well as its location within the Morne Seychellois National Park and Baie Ternay Marine Park.

A new environment impact assessment detailing a revised version of the project, including a proposal to downsize from over 400 rooms to 100, was presented to local stakeholders by the developers during a public meeting held in November last year.

One of the main concerns raised during the meeting was the proposed dredging of 134,280 cubic metres of the Baie Ternay Marine National Park, which many feared would irreparably damage the habitat of several marine species in the area.

The announcement of Michel’s decision to halt the project comes a week after officials of the Ministry of Environment, Energy and Climate Change announced that the project was still in the Environment Impact Assessment stage.

According to the Seychelles Nation newspaper, the Emirates Group consultants submitted a first draft of the document on January 27 for review.

In his address this afternoon, Michel said all major tourism projects, including hotels, are subjected to an environmental impact assessment, adding that the Cap Ternay project was “no exception”.

“We always follow the same principle. I have listened, consulted and studied the reports. All the scientific arguments suggest that such a project will affect the environment of the area. Naturally, as the President of this country, it is my duty and responsibility to take the best decision in the interest of the Seychellois people, and for the protection of our heritage. I have decided that there will be no such project at Cap Ternay,” said Michel.

According to the Seychellois head of state, the project’s promoters “understood, accepted and respected” the decision to terminate the planned development.

The ease of doing business, entrepreneurship, empowerment, national unity and family values were only some of the themes he addressed.

Looking at the first two pillars of the Indian Ocean island nation’s economy – tourism and fisheries – the Seychellois head of state spoke about the need for more new investments in both sectors.

Michel also spoke about the country’s economic performance noting the 23 percent of GDP deficit of the balance of payments and the increase in the country’s foreign exchange reserves from $425 million in 2013 to $464 million in 2014, which is equivalent to four months of importation.

“With regard to our external debt payments, our foreign exchange reserves represent about 94% of the external debt. This is a strong indication that Seychelles does not anticipate any difficulties in meeting its external debt repayments over the years to come,” he said, while stressing the need to continue its policy of fiscal discipline in order to further strengthen the economy.

“The positive fiscal performance of 2014 and the successes we have had in our debt restructuring have helped to considerably bolster the sustainability of Seychelles' external debt,” explained the president. “We must maintain this strategy for us to achieve our aim of reducing public debt to 50% of our gross national product by 2018.”

On the topic of debt, the president announced the ‘historic signing’ on Wednesday in Paris of a debt buyback agreement with the Paris Club.

The agreement was signed on behalf of Seychelles by the newly-appointed Minister for Finance, Trade and the Blue Economy, Jean Paul Adam.

“Our proposal for a partial exchange of our debt in return for financing action to mitigate against climate change has been accepted by the Paris Club.  This means that about $30 million of our debt will be transferred in terms of a fund for the protection and development of our marine space – our Blue Economy.”

“In addition, our partners are giving us a further 5 percent reduction in that debt. Through this debt exchange, we shall be better able to protect our oceans, create opportunities for artisanal fishing, reduce our foreign exchange payments, and keep more money within our economy,” President Michel said.

One other announcement made during the State of the Nation Address is the setting up of a Police Child Protection Team in collaboration with social services to tackle the issue of child abuse and neglect.

Noting that there had been calls for the police, social services and the judiciary to become more effective when dealing with child abuse and neglect cases, President Michel said the new unit would conduct investigations and bring cases to court against parents who persistently neglect their children and put them at risk for abuse.

For the first time ever in Seychelles, the president also announced that new fathers will soon be able to apply for five days of paternity leave from their employers, on the provision that the applicant officially acknowledges the newborn as his child.

Members of the Seychelles National Assembly will begin to deliver their reactions to Michel’s State of the Nation address from Monday next week.

The Leader of the Opposition in the assembly, David Pierre, will be first to give his reaction, followed by the Leader of Government Business Marie-Antoinette Rose and the other MPs.