‘The World’ at their feet - luxury cruise ship arrives in Seychelles 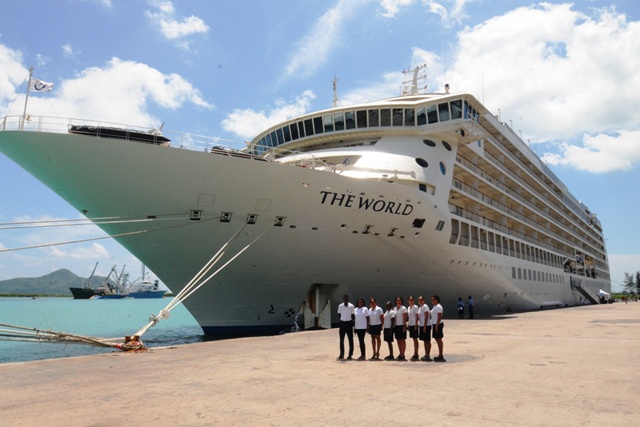 (Seychelles News Agency) - It’s an idea worth working a lifetime for: purchasing your very own mobile apartment on a huge luxury cruise ship, and spending your days wandering from port to port throughout the world.

For around 120 residents of 19 different nationalities on board ‘The World’, this idea is their reality, and for the next few days, these elite passengers will be exploring the very best that paradise has to offer after their ship docked at the port of Victoria at 9 am yesterday on the main Seychelles island of Mahé.

The World was launched in 2002 and it is the largest privately owned residential yacht with 165 residences on board.

According to a press release issued last week by the Seychelles Ministry of Tourism and Culture, 7⁰ South had been working closely with the management of The World over the past four months to coordinate the residents’ visit to the archipelago of 115 islands in the western Indian Ocean.

“They spent the day on Mahé, some chose different excursions, such as shopping at Eden Plaza, eating out in restaurants, going to the beach at Beau Vallon, and tours of Victoria including the Botanical Gardens. Some also chose golf, fishing excursions, visit in the marine park or private tours across the island,” de Silva told SNA in a telephonic interview, adding that welcoming such cruise ship passengers to Seychelles was for the benefit of the entire tourism sector as a whole.

“It’s not something that is benefiting only 7⁰ South, but a whole range of tourism operators because these people are going to restaurants, spending the day at the five star hotels, going shopping, on guided tours and so on,” she said.

Tourism and Culture Minister Alain St. Ange spent a night aboard the cruise ship last week when it was docked in the Maldives to give a talk on the diverse wonders to be experienced in the Seychelles.

De Silva said the cruise residents left for La Digue, the Seychelles’ third most populated island, on Thursday night and were spending the day there before leaving Friday night for the second largest island of Praslin. The visitors will leave Praslin on Saturday for the remote and uninhabited islands of Aldabra and Assumption, closer to the eastern coastline of Afica.

“The trip to Aldabra will take around two days and they will spend two days there before leaving Seychelles,” said de Silva.