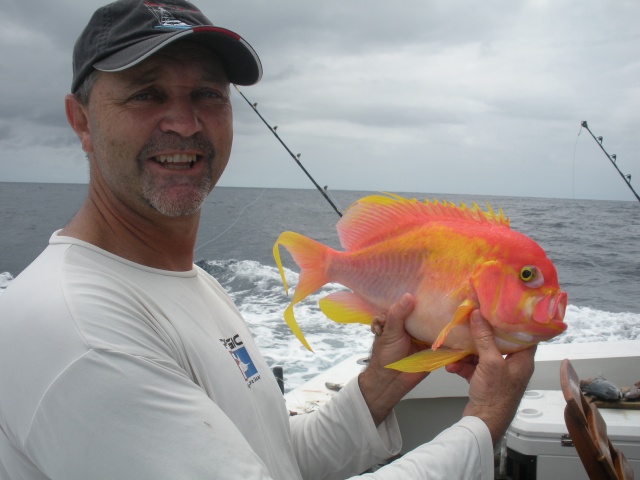 (Seychelles News Agency) - Avid Seychellois angler Marc Houareau was stunned to find a fish at the end of his line that he had never seen before – a beautiful pink fish with long, bright yellow fins. It was so beautiful that he tried to revive it and throw it back, but when it continued to float on the surface of the water, he decided to keep it on ice and take it to the Seychelles Fishing Authority (SFA) for identification.

“We were catching some Job Jaune (job fish) and Saumon (salmon) at a depth of around 100 metres when this beautiful fish came up on my line” Houareau told local newspaper Today in Seychelles. “None of the team on board had ever seen such a fish.”

The SFA identified the fish as a “Gorgeous Swallowtail” otherwise known by its scientific name, Meganthias Natalensis.

Reports of sightings of this rare fish in the Seychelles have been limited to one in 2006, and another was also caught off the Kenyan coastline in 2012.

Records of the anthiine fish genus Meganthias are extremely elusive, with sightings and records of most species numbering only a few.