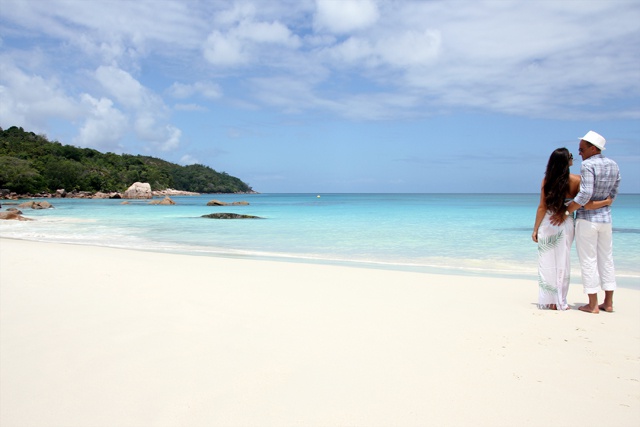 One of the most romantic settings in the Seychelles, the beach of Anse Lazio on the second largest island of Praslin has been ranked by TripAdvisor users as the best beach in the entire archipelago (Romano Laurence, Seychelles News Agency)

(Seychelles News Agency) - Cradled by a large bay with two mountain peaks on each side, adorned by white powder-fine sand and caressed by calm turquoise water, the half-kilometre long beach of Anse Lazio located on the northwest coast of the second most populated island of Seychelles, Praslin, is considered as a ‘must’ on the list of to-do’s for visitors to the Indian Ocean archipelago.

The beach was recently graded as the 6th best beach in world by the user-reviewed Tripadvisor website, following similar recognition from travel website Lonely Planet and numerous other travel websites and magazines.

“I like this beach because it has the finest of sands and at midday you are protected by these gigantic bodamier and takamaka trees,” said a German tourist.

“I am a regular here. I take the bus to Anse Boudin at the earliest hour and before the sun gets too high I walk the half-hour climb and perch on the mountain overlooking the bay of Anse Lazio,” another tourist tells SNA.

“After descending and arriving on the beach, I tend to avoid the main beach and walk instead to the narrow paths on the left-hand side where there are other small bays. There I find solitude in Seychelles and it is also the best place for snorkelling, with good visibility and a high density of fish.”

The worldly-wise tourist added that Anse Lazio is one of the rare sites where snorkellers can regularly find sea turtles feeding in the shallow calmness of the bay.

An Italian tourist told SNA that “the beach is picture-perfect but can be dangerous to those who cannot swim,” adding that she prefers to tan in the sun instead of taking a swim.

By the middle of April to August, Anse Lazio is also a beautiful sight for the romantics with a spectacular sunset over neighbouring islands such as Aride and Ile aux Four.

Alwyn Talma, who has been living on a property adjacent to Anse Lazio for the past ten years was proudly biased in favour of the beach.

“Naturally for me, this is home and there is no place like home. In the early morning before the tourists’ flocks here I perched on my veranda with my cup of tea and lost myself in the view of the sea, which is sometimes emerald and sometimes dark blue depending on the light. And in the evening, around 4.30 to 5:00, the beach is deserted and I go for a swim. How can I not love Anse Lazio?” asked Talma.

Among the many reddish granite boulders on the beach, Talma pointed out to SNA several edifices that with an imaginative eye could form turtles, serpents and other weird and wonderful shapes.

The tidal pools of Anse Lazio are a great hit among children. Warmed by the sun, the water awaits the arrival of big, cool waves to replenish the shallow waters.

“Unlike Anse Source D’Argent [on La Digue] and Cote D'Or [also on Praslin], the water here is not too shallow. It has a slope to it and the waves are not as big as Grand Anse [on La Digue] or Anse Georgette [on Praslin],” says Talma, adding that the beach has a unique character to it.

The perfection and elegance of Anse Lazio is further enhanced by its rich tapestry of local folk tales surrounding swashbuckling, treasure-hiding pirates and the agricultural development of the island’s earliest settlers.

Chiselled in several granite boulders are what could be telltale signs of the pirates that are reported to have wandered the Indian Ocean Island hundreds of years earlier, including an unmistakable arrow pointing to the mountain of Cherimont, while some other mysterious carvings point towards the rugged and almost bare mountain of La Pointe Chevalier.

In a telephone interview with SNA, Dartagnan Verlaque, a relative of some of the largest property owners adjacent to this ideal patch of land, recalled how the area was once filled with fragrant vanilla plantations and provided easy access from one side of the island of Praslin to another.

“Our family brought the properties in 1930,” said Verlaque. “In the early days, our grandfathers collected some 300 coconuts here, which they sold to our neighbours the Uzice family [where Talma resides]. They had a copra house and the remnants of that building can still be found amongst the bushes of Anse Lazio. The vanilla was taken to Mahe and there are often times when the old pirogues [traditional Creole boats] got a good thrashing from the waves and the cargo got damaged,” says Verlaque.

The descendants of the Verlaque family has set up two restaurants overlooking the beach; the Bonbon Plume and the Le Chevalier restaurant, both of which feed famished beach-goers.

“Anse Lazio was very important to the Praslin community as well in latter days. There was a road here that connected the island from one side to another,” said Verlaque, encouraging SNA to look for the remnants of the road washed away by a flooding incident some 50 years ago. The bridge of the estuary however still stands as a stark reminder of the impermanence of structures with the passage of time.

The string of praises for Anse Lazio are not without a counterweight, however. In 2011, two shark attacks at the famous beach sparked a media frenzy and the enforcement of a swimming ban. Attacks from sharks had only ever been recorded before in the Seychelles during the 1960’s. Since 2011, no sharks have been found in the bay.

A large shark net on one side of the beach and the constant presence of lifeguards, rarely ever found on other popular beaches of the Seychelles, are the only reminders of those dark days.

Ever stoic about his home turf, Talma argues that one “is more likely to get hit by a coconut that to get bitten by a shark.”

He also pointed out that fewer yachts mooring in the area in recent years meant this would be a deterrent to large fish entering the bay.

With easy road access and good advertising, the beach of Anse Lazio can also be one of the busiest on Praslin, especially on weekends when Seychellois families come to enjoy the world renowned beach and its inviting waters.

This however, has not lowered the pedestal that locals and visitors of Seychelles attribute to Anse Lazio.