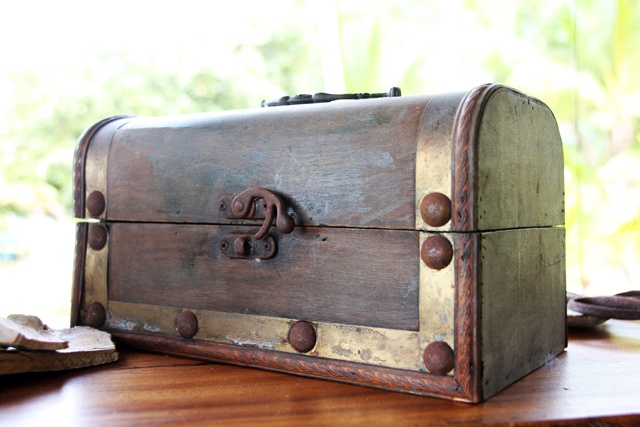 A chest for hidden treasure? The chest was found at Anse Takamaka on Praslin Island. The area is not only an lush property developed into a tourism resort 'Iles de Palmes', but it is also a cultural asset for Seychelles where visitors can ponder on the days of the pirates through artefacts and old buildings. (Romano Laurence, Seychelles News Agency)

(Seychelles News Agency) - Historians from Seychelles and Europe believe that hundreds of years ago, the Seychelles archipelago of 115 islands were used as a pirate hideaway, and legends of buried treasures still make a good yarn among the islands’ 90,000 inhabitants.

A few locals and foreign nationals have even chosen to make the pursuit of these treasures their lifetime quests.

The attraction of finding famous hidden treasures is understandable, including that of ‘La Buse’ (The Buzzard), also known as Olivier Levasseur, which is now estimated to be worth up to a billion dollars.

Amongst the most tenacious of treasure seekers was Englishman Reginald Herbert Cruise-Wilkins who concentrated his search in the Bel Ombre district, a northern district on the most populated island of Mahe, only to find a few scraps of what could be the famous pirate’s hoard.

The Indian Ocean’s high seas were terrorised by La Buse during the late 18th century and according to records of his plunders, part of his treasure trove included a priceless diamond cross, taken from the Bishop of Goa as he was sailing to India in a Royal Portuguese Papal vessel Le Cap de Ver.

The cross and other valuable church ornaments have not surfaced since they were lost.

At one beachfront property at Anse Takamaka, a bay on the Seychelles’ second most populated island of Praslin, the current owner claims that one such chest was found in 1971, the contents of which were never revealed.

The former owner of the property, one Harry Berlouis, reportedly left the country that same year.

But the current proprietor, Christopher Gill, who bought it in 1991, has found another sort of treasure, one that is proving culturally valuable for the people of Seychelles.

Soon after settling into the property with his family, Gill claims to have found a number of artefacts he believes are the remnants of pirates.

“We found a pistol, then a cannon ball and with the kids, we uncovered many other artefacts including a bottle of rum... which made us believe that pirates could have frequented the place even before the settlement arrived in 1840,” says Gill, postulating that these items may well date back to the 1700s.

Around the property, several of these found treasures are on display in what Gill has recently opened to the public as a National Heritage Treasure Trail with the support of the Seychelles Heritage Foundation, a state-owned organisation tasked with protecting the cultural heritage of the islands.

Heading towards a derelict building, Gill showed us another of the ‘treasures’ found on his property.

In the early 1900s, cinnamon exportation was one of the mainstays of the Seychelles economy. Tonnes of cinnamon tree bark were exported while the leaves were manufactured into essence in distilleries.

Under a huge mango tree, in a clearing near the main road leading towards Anse La Blague, where a small settlement of over two hundred people lives, one of the last distilleries from these all-but-forgotten times can also be found.

The derelict instrument still had a few of its metal parts lying on the ground, while a few invasive creepers had begun to crawl up what must have once been a wall. In its dilapidated state, the area is eye-catching to passers-by who stop along the main road to read a clear description of this National Heritage Site of Seychelles.

Further along the main road of Anse La Blague, we ventured further into the bushes, where huge cinnamon trees welcomed us, and in a small clearing, in the shadow of a massive boulder, an ancient oven fashioned from melted coral or ‘laso' in the native Creole language, is still standing, almost sheltered from the passing of time.

Gill believes that this very oven was used by pirates in the 18th century,explaining that it was of vital importance to preserve the archeological and agricultural history of the islands, pointing out several overgrown vanilla, patchouli and cinnamon trees, all remnants of the ancient plantation.

Walking back to the plantation house, Gill pointed out the spot close to an important wetland where it is claimed that local workers accidentally found the buried treasure chest.

“I would like to open this area as well… There are interesting markings on rocks, that are very intriguing,” says Gill.

Gill’s eloquent and informative tales about the history of the area provides good entertainment to visitors for a mere 100 Seychelles rupee (around $7.50) entrance fee to the heritage site.

When contacted by SNA, the Chief Executive Officer of Seychelles Heritage Foundation, Patrick Nanty, commended the project, remarking that the “property has unique features.”

“We have provided manpower to clear especially the site where the distillery is, we have also given advice on how to proceed with the project, but more importantly we intend to assist in a detailed research for the area, in order to enrich the experiences of visitors,” said Nanty, adding that they have also gifted the property with a traditional pirogue, or traditional Creole fishing vessel.

Heading back to the reception area, an iconic building once used as copra house, to dry the insides of coconuts before they were pressed for oil, Gill shows us his own collection of Aldabra tortoises and a few of the chalets which adorn his property.

“I have kept a good part of this property out of harm’s way to save these historical treasures, I might not hold on to them for always but it all depends on how travel agents and other partners wants to help me save these derelicts…” says Gill, pushing back his glasses solemnly.

“It may not be the treasure of La Buse but it is a treasure of a country. We should promote and preserve it”.