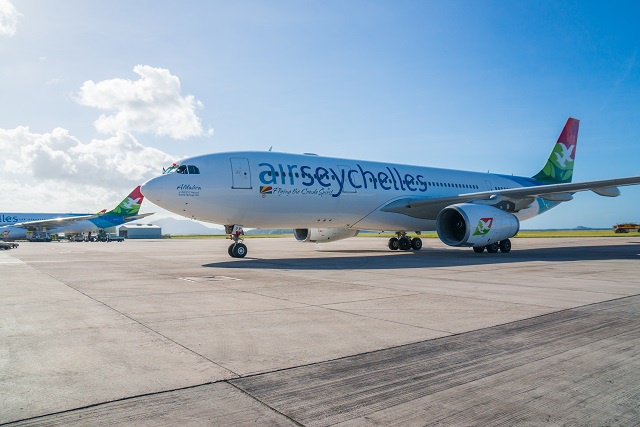 (Seychelles News Agency) - The Seychelles national carrier has reported its third consecutive year of net profit raking in a total of $3.2 million in 2014 slightly exceeding the $3 million profit reported in 2013.

In July 2014, Air Seychelles re-launched flights to Paris after a two and a half year break and in December saw the airline’s simultaneous launching of flights to three regional destinations – Dar es Salaam, Antananarivo and Mumbai.

Announcing the financial results in a press statement this morning, Air Seychelles highlighted an increase in its total revenue as a result of this “significant network growth” in 2014.

Aside of Paris and the three regional routes of Dar es Salaam, Antananarivo and Mumbai, with a fleet of two Airbus A330-200 and an A320 only acquired in November last year, Air Seychelles also flies to Abu Dhabi, Hong Kong, Johannesburg and Mauritius.

Adding 2 DHC-6 Twin Otters to its domestic fleet in 2014, Air Seychelles which has a 97 percent Seychellois workforce also operated more than 200 domestic services per week between the Seychelles main island of Mahé and the second most populated, Praslin while also offering charter services to other islands within the archipelago.

According to the national carrier, it transported a total of 412,088 passengers last year representing an increase of 20 percent.

Commenting on the results, Air Seychelles has said the $3.2 million net profit achieved “reflects continued improvement in the airline’s key performance indicators, following Etihad Airways’ acquisition of a 40 percent share in 2012 and the implementation of a turnaround plan to create a sustainable business.”

UAE's Etihad Airways invested $45 million in Air Seychelles when it bought the 40% share in the airline.

Air Seychelles which was established in 1977 and adopted its present name in September 1978 was until 2012 wholly owned by the Seychelles government.

“With further significant financial support from its shareholders, we hope Air Seychelles can announce a further expansion of its network in its key markets as well as new markets in 2015, thereby increasing its economic contribution to Seychelles,” said the Chairman of the Air Seychelles board, Joel Morgan, also the archipelago’s Minister for Foreign Affairs and Transport, in the statement

“While the competitive environment remains challenging, these results show we are progressively consolidating and building on our achievements. Our strategy is to use Seychelles’ unique position in the Indian Ocean to capture the strong travel flows between East Africa, the Western Indian Ocean, the UAE and the Indian Subcontinent. For example, the strong growth in passenger numbers from Mumbai to other destinations on our network shows this approach is working,” said Papa.

Speaking in an interview with SNA this morning, Papa said the seat factor for the Mumbai flights have been sitting at 60 to 65 percent since the launch in December last year adding that the performance of its regional routes in general, has added to the overall business results achieved in 2014.

“We are constantly monitoring those markets and no different to what we have done with our operations via Abu Dhabi into Charles de Gaulle we are flexible enough to adjust our business model based on the changes in customers on their behaviour and what the market’s doing,” he said.

“The airline industry is under a significant amount of pressure right now and it’s always been. It's prone to any changes around the world. You’ve got increased competition, we’ve got the introduction of A380’s in the market place where 4 or 5 years ago they were not known of, we’ve got the currency exchange and we got the currency issue....you’ve got Ebola virus, regulatory constraints to different markets, so all of that taken into account. I must say the results of 3.2 million is a great achievement for Air Seychelles.”

Three months into the year 2015 already, the Air Seychelles CEO has said the focus will be to build on its successes and to achieve its mandate which is to promote tourism and trade being the key enabler to the Seychelles economy.

Air Seychelles currently offers cargo and passenger services to destinations within the archipelago itself as well as in Africa, the Middle East and Asia, also has codeshare partnerships with airberlin, Cathay Pacific Airways, Etihad Airways, Alitalia, Hong Kong Airlines and South African Airways, extending its network to 45 cities around the world.