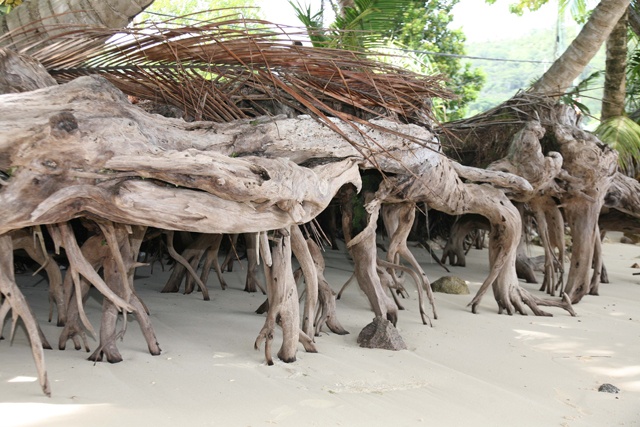 Beach erosion exposes the tree roots at Anse La Mouche beach on Mahe island in the Seychelles, which some experts believe is caused by climate change. Projects to prevent beach erosion are being undertaken by the islands' government (Mervyn Marie, Seychelles News Agency)

(Seychelles News Agency) - Seychelles has become one of perhaps only a handful of countries that has managed to utilize all of the funds allocated to it by the Global Environment Facility (GEF) for the current funding period.

The news was announced by the Minister for Environment and Energy, Dr. Rolph Payet, who congratulated the staff of the Project Coordinating Unit for achieving approval for all their projects before the deadline as the current funding cycle, known as GEF5, comes to an end.

According to its website, the GEF is the largest independent financial organization in the environment sector that provides assistance or grants to both government and non-government entities for the implementation of projects related to biodiversity, climate change, international waters, land degradation, the ozone layer, and persistent organic pollutants.

Since its inception in 1991, the GEF has achieved a significant amount of success, particularly within developing countries and countries with economies in transition. To date, the GEF has provided $10.5 billion in grants and has leveraged $51 billion in co-financing for over 2,700 projects in over 165 countries.

Through its Small Grants Programme (SGP), the GEF has also made more than 16,030 small grants directly to civil society and community based organizations, totaling $653.2 million.

Under the indicative system for transparent allocation of resources for the GEF5 period (2010-2014), Seychelles was entitled an allocation of $7.6 million, subject to the submission of viable projects to be approved by the GEF Council.

In November 2013, two national biodiversity-related projects were approved: one for the expansion and strengthening of the protected area subsystem of the outer islands of the archipelago, amounting to $1.79 million, and the financing of protected areas in the Seychelles through sustainable financing, with an expected cost of $2.78 million.

All funds identified for climate change adaptation have been earmarked for a $1.77 million project to improve energy efficiency in buildings and a project to widen the use of renewable energy technologies in Seychelles. This $1.6 million project, which helps residents co-finance the purchase and installation of grid-connected rooftop photovoltaic systems, was approved in September 2012 and is currently underway and has received substantial co-financing support from government.

At the fifth GEF general assembly to be held in Cancun, Mexico, from 25 to 30 May, the GEF is expected to finalise the next replenishment for GEF6 at an estimated cost of US $4.89 billion, representing an increase of 15 percent over GEF5.

Due to the Seychelles’ current efficient project performance levels, it is expected to retain its levels of GEF funding for the next replenishment cycle.

A million species risk extinction, are we one of them?