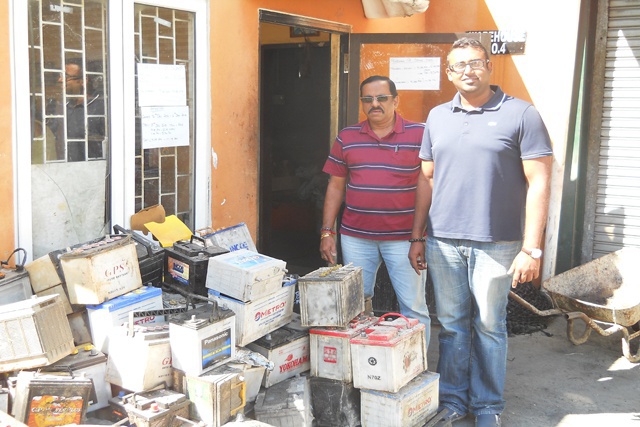 (Seychelles News Agency) - Seychelles, an Indian Ocean archipelago of 115 islands with a population of around 90,000 people is faced with the same challenges as other developing nations. As it increasingly becomes a consumer society, it is inevitable to see an increase in the amount of waste piling up on the landfills or polluting the environment.

In a bid to address the issue of waste being dumped irresponsibly, several business ventures are going into recycling, to change discarded waste material into new products and reduce pollution and their resulting health hazards.

Surya Enterprises, a father and son partnership, based at the Providence Industrial Estate, about 3 km south of the Seychelles capital of Victoria, is one such business that is cashing in on used car batteries and non-ferrous wastes.

Jothinatan Naidoo, who went into waste recycling ten years ago, told SNA that the best way to reduce the amount of waste piling up is to put a value on it.

"We offered a value for the batteries, which before were just being dumped all over the place," he said.

Surya Enterprises is presently exporting 60 to 100 tons of used car batteries annually along with 2,000 tons of scrap metal.

A fair share of the used batteries are brought to Surya by environmentally conscious vehicle owners or drivers themselves, which they exchange for $1 for a car battery and $1.8 for a truck battery.

Naidoo's son Sanjay, who holds an MBA in aerospace engineering from Daytona Beach University in Florida, joined the business in 2012.

"My dad needed me in the business and I am happy ridding Seychelles of wastes."

Explaining the process of preparing the used battery for export, he told SNA that first the acid, which is a hazardous waste, potentially dangerous to human health must be drained out.

"Unless this is done, the acid can eat away at the metal of the container in which it is shipped."

The acid is poured into plastic of Low-Density Polyethylene (LDPE) barrels and mixed with caustic soda, which converts it into water. This can then be disposed of as it is non-toxic.

It’s the battery shell with the lead that is inside which is then exported.

According to Naidoo, lead constitutes about 40 percent of the battery's original weight or about 6 kilograms per battery.

Surya Enterprises works in close collaboration with the Seychelles Ministry responsible for the Environment which has to be notified whenever there are shipments. The Government has to be satisfied that this is being done in accordance with the norms of the Basel Convention for Hazardous Wastes.

The process of collecting and processing the used batteries before shipment can take about a month.

Used batteries from Seychelles giving life to new ones

"But we are now opening up to India. The market can change from country to country," said Jothinatan Naidoo adding that the importer usually extracts the lead, melts it and use it in the manufacture of new batteries.

It is estimated that 95 percent of car batteries are made that way and that only 5 percent are linked to fresh lead.

Both father and son are satisfied they are making a good contribution toward protecting the environment by discouraging the dumping of toxic waste.

They claim that before they ventured into the recycling of used batteries, 99 percent of them were being dumped into the landfills.

This meant that the acid seeping from the batteries was a potential threat to the environment.

Ridding Seychelles of tons of used batteries and scrap metal

Surya Enterprises also has contracts with large companies, such as the Seychelles Public Transport Corporation (SPTC) and Hardajh, the international manufacturer of cans for the Indian Ocean Tuna (IOT) cannery for the collection of their waste metals.

Surya Enterprises which boasts Seychelles’ biggest compacter that turns metals into blocks ready for export told SNA that 40 percent of those are non-ferrous metals such as copper, aluminium and brass, which are derived from motor vehicle components such as radiators and compressors which have to be compressed before shipment.

A container of scrap metal can weigh between 20 and 25 tons while one filled with cleaned batteries weighs between 26-28 tons, as lead is heavier.

Just to give an idea of what it's worth, according to World Bank sources dated to February 2015 1 metric tons of lead on the world market cost around $1,796.