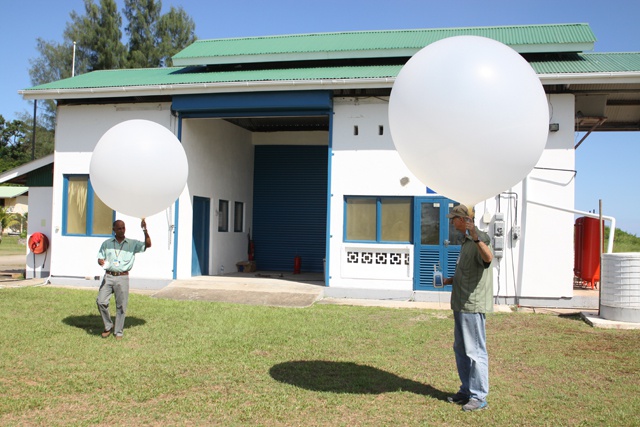 (Seychelles News Agency) - For over 40 years, scientists have known about the existence of a repeated circulation occurring around the earth precisely in the tropics near the equator. The Madden-Julian oscillation (MJO), as it is commonly known, was discovered by Roland Madden and Paul Julian of the American National Center for Atmospheric Research (NCAR) in 1971.

While scientists worldwide have studied the phenomenon and have been able to establish that it is an oscillation that repeats itself every 30 to 90 days, that it moves eastward around the equator at an average speed of 5 metres per second affecting the variability of rainfall in many parts of the tropical region and also influences the development of other weather phenomena like the El Nino and tropical cyclone, many things remain unclear.

It is in a bid to gather information to better understand its mechanism and what really triggers MJO that a US-led study is ongoing in three countries that lie near the equator since February.

Researchers coming all the way from the University of Notre Dame in the northern part of the US State of Indiana have dispatched loads of equipment to Sri Lanka, Singapore and the Seychelles islands to gather as much data that would help to shed more light on the phenomenon.

In Seychelles, the study is being done in collaboration with the University of Notre Dame as the one funding the project, the archipelago’s Meteorological Services and a locally based NGO – Better Life Foundation (BLF) led by the Chairman of the Seychelles Chamber of Commerce and Industries (SCCI) Marco Francis.

BLF collaborated with another US-led study by Scripps Institution of Oceanography in November last year which was aiming to improve the understanding of the physical air-sea exchange processes and understand surface current dynamics in the tropical western Indian Ocean.

For the current experiment on the MJO, at least seven individuals have been coming to the Indian Ocean archipelago of 115 islands since the beginning of February.

“Most of the equipment we have is trying to look at the structure of the atmosphere and small scale kind of dynamics that change quickly,” Researcher - Dr Byron Blomquist told SNA.

Blomquist who is temporarily collaborating with the University of Notre Dame works for the National Oceanic and Atmospheric Administration (NOAA) in the US.

“Most of the work I do has to do with Ocean and atmosphere interaction, the way gases and heat and things are exchanged between the ocean and atmosphere. So I spend a lot of time on ships actually, I don’t very often come in to do such projects on the land. It’s been very good it’s been much nicer working here than on a ship.”

Blomquist has been working closely with Patrick Conry, a graduate research assistant and PHD candidate who has been stationed here all along and is actively engaged in the daily release of two radiosondes at two different intervals during the day.

Once released they fly high up in the sky transmitting data until they burst after travelling between 23 to 25 kilometres.

“We release the balloons every day at 10 am and 3pm and monitor the data, make sure there are no problems with data, make sure all the equipment is collecting correctly all the different dataset and also backing up all the data,” Conry told SNA.

The young researcher who is involved in an experiment on the MJO for the first time said Seychelles was chosen because it is a nice location isolated in the middle of the western Indian Ocean and therefore, a good spot to study the phenomenon.

“……It’s also an area near the equator which is where this type of events occur.”

After having spent the last two months in Seychelles the US team will be dissembling most of their equipment next week before heading off to the University of Notre Dame to start analysing the information gathered, something which is expected to take several years.

The results will eventually provide something extra about the phenomenon or indicate if further research needs to be done.

For the Seychelles Met Services more in-depth knowledge will be a plus not only for countries in the tropics but for the wider global community as well.

“Yes it affects only tropical countries directly but the Americans for example are interested because the Madden-Julian Oscillation influence the development of El Nino which affects many countries not only tropical countries. If they better understand MJO the forecast of El Nino can improve. Furthermore, MJO also provides a tough test to their knowledge of the relationship between the small-scale and large-scale weather systems thus provide with additional information that will help to solve the more complex problems of MJO, particularly in relation to its representation in models.” the Seychelles’ Chief Meteorologist Vincent Amelie told SNA.

For Seychelles specifically, more knowledge is expected to allow the local meteorologists to make better predictions and long-term forecast which in turn will help policy makers to make informed decisions when dealing with the management of issues or resources that are directly affected by weather conditions.

“Last year when I was in the UK, I wanted to know how MJO affects our rain pattern I saw there was a good correlation between MJO and rainfall during our rainy season where it can give us more or less rain depending on it’s the strength and phases. Although we know that MJO completes one circle around the equator within 30 to 90 days not always it causes extreme events, it depends on its magnitude and phases it’s in,” added Amelie.

"More information from this experiment can allow us to undertake further studies to build on what we already know, this can ultimately assist with the development of a more advanced statistical forecasting technique to use the state of the MJO to predict Seychelles rainfall on 1-2 week timescales, thus improve weather warnings, particularly related to flooding, which is one of the common and major weather related hazard during the wet season.”

According to the Seychelles Chief Meteorologist a better understanding of the MJO will also go a long way in helping to distinguish the different climate variability causing extreme weather events in the country and help meteorologists to know when exactly its El Nino, when its MJO, when its climate change etc….

Interestingly, even though the field study will be completed at the end of next week, the US team leaving Seychelles, will not be the end of this collaboration.

Amelie informed SNA that an MOU was signed two weeks ago which specifies that the cooperation will go on until 2017.

As part of this cooperation, one of the Met Services staff will be able to join the US team at the University of Notre Dame to help analyse the data, something Amelie has said is a first for the Seychelles Met Services.

Seychelles will also be benefitting with the prolonged use of some of the equipment that will be left behind.