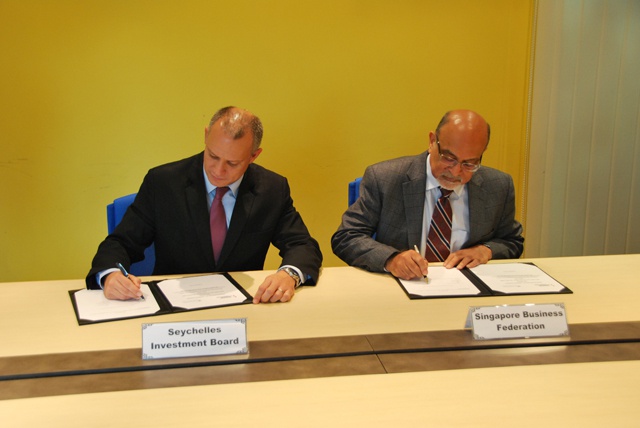 (Seychelles News Agency) - Seychelles and Singapore are looking to increase their collaboration in a number of economic sectors from trade, financial services, port development - including transshipment and fuel bunkering - to public-private partnerships.

This follows the recent official visit to Singapore by the Minister of Finance, Trade and the Blue Economy, Jean Paul Adam and the subsequent signing of a Memorandum of Understanding (MoU) between the Indian Ocean archipelago and the Singapore Cooperation Enterprise (SCE).

Formed in 2006, the SCE, which falls under the Asian nation’s Ministry of Trade and Industry, is mandated to develop capacities in partner countries for economic development building on Singapore’s experiences.

“This MoU will allow us to tap into Singapore’s expertise to better formulate our own economic development strategies. This opportunity is at a key moment for us, where we seek to revamp our financial services sector and where we seek to further develop the Blue Economy concept by building opportunities around our port and maritime infrastructure,” said Adam, according to a press statement issued on Sunday by the Seychelles Ministry of Foreign Affairs and Transport.

The MoU comes a few months after the Seychelles islands and Singapore concluded a double taxation avoidance agreement (DTAA), seeking to allow businesses operating in the two countries to pay tax in one of the jurisdictions and avoid taxation in the other, aiming to encourage trade and investment between the two countries.

The agreement was expected to come into effect in January this year after being ratified by both countries.

The Seychelles archipelago of 115 islands with a population of around 90,000 people depends heavily on food imports from neighbouring African and Asian countries, with up to 90 percent of goods consumed coming in by air and sea cargo.

According to provisional statistics compiled by the National Bureau of Statistics (NBS) the largest volume of imports to Seychelles in 2014 were from the UAE, followed by France, Spain, South Africa, United Kingdom, India, China, Mauritius and Singapore.

On the export side, Seychelles’ fishing industry accounts for over 90 percent of total exports with France and the United Kingdom being among Seychelles’ main trading partners.

According to the NBS, the country exported goods worth just over $230 million in the first 9 months of 2014, including fish products, sea cucumbers and medical supplies. Of this, only some $70,000 worth of goods were exported to Singapore.

In the same year, Seychelles imported nearly $800 million of goods, of which approximately $24 million (3.1% of the total) came from Singapore.

While in Singapore, Adam also heard from the country’s Business Federation where private sector representatives indicated that renewable energy, education and banking were some of the sectors in which they showed interest in developing cooperation between the two sides.

On behalf of the Seychelles Investment Board, the Minister also signed another MoU with the Singapore Business Federation to promote cooperation in technology, investment and knowledge transfer between the two countries as well as identifying obstacles that may hinder the growth of trade and business.

The Finance, Trade and Blue Economy Minister who was accompanied by senior officials from his ministry, the Seychelles’ Central Bank and Financial Services Authority also took the opportunity to highlight the development of the blue economy concept Seychelles is promoting during a meeting with Singapore’s Maritime and Port Authority.