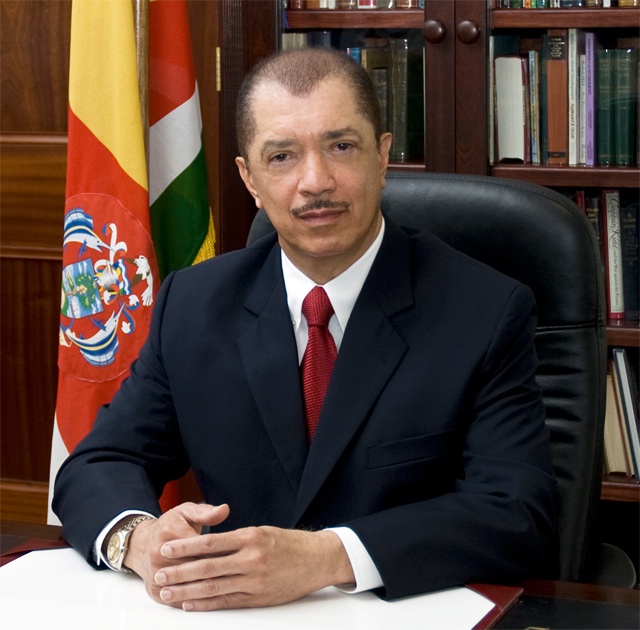 (Seychelles News Agency) - The Seychelles President James Michel has called for the organisation of an emergency meeting of the Alliance of Small Island Developing States (AOSIS) in the wake of the devastating cyclone that hit Vanuatu last Friday.

According to a press statement issued this afternoon by the Ministry of Foreign Affairs and Transport, the meeting will seek to determine how to provide and coordinate assistance and seek support for the stricken country.

Michel has tasked the Seychelles Ambassador for Climate Change and Small Island Developing Issues, Ronny Jumeau, to call for the emergency meeting in a show of solidarity with the Pacific island nation.

The Alliance of Small Island States (AOSIS), which functions as an ad hoc lobby and negotiating voice for Small Island developing States (SIDS) within the United Nations system has 39 member states, all of which are small islands and low-lying coastal states from every region of the world.

The Seychellois head of state has also pledged, on behalf of the island nation’s government, the sum of $100,000 to Vanuatu to assist in ongoing emergency relief efforts.

“As a like-minded Small Island Developing State, Seychelles strongly identifies with the difficult developmental challenges that the SIDS typically face, and we will continue to stand in close solidarity with Vanuatu,” said Michel in the statement.

Pleading to the world for much-needed support

Vanuatu's president Baldwin Lonsdale launched a worldwide plea on Monday for help to rebuild what he described as the "completely destroyed" infrastructure in his country.

"The humanitarian need is immediate, we need it right now… after all the development, we have done for the last couple of years and this big cyclone came and just destroyed... all the infrastructure the government has... built. Completely destroyed," he was quoted as saying by the AFP ahead of flying home from a disaster conference in Japan.

With the financial pledge, the President of Seychelles has joined other world leaders who have pledged support to the Pacific nation.

According to AFP Australia, New Zealand and France have already sent military planes loaded with food, shelter, medicine and generators, along with disaster relief teams to the cyclone-hit region.

Tropical cyclone ‘Pam’ which tore through Vanuatu Friday night with winds blowing up to 320 kilometres has left behind massive destruction not only in the capital but also on the country’s remote islands in the archipelago, which spans more than 12,000 square kilometres.

Death toll expected to rise, fear of diseases due to lack of proper sanitation

AFP has reported an official death toll of six and 30 injured in the capital of Port Vila, but this is believed to be only a fraction of the real fatalities caused by the storm.

According to aid workers, up to 90 percent of homes in the capital have been destroyed and it is estimated that more than 100,000 people are likely to be left homeless.

Schools, evacuation centres, health facilities are among some of the types of infrastructure destroyed.

“While the aid missions continued landing, workers on the ground said there was no way to distribute desperately needed supplies across the archipelago's 80 islands, warning it would take days to reach remote villages flattened by the monster storm,” reported AFP.

Apart from the difficulty to bring help to those in dire need the rise of diseases due to lack of clean water and proper sanitation is also worrying aid workers and the authorities.

The Seychelles’ President has also sent a message of condolences and solidarity to President Lonsdale, the government and people of Vanuatu following the disaster.

“The thoughts and prayers of the Seychellois people are with Vanuatu in these darkest of moments,” said Michel in his message.

Vanuatu, which consists of low-lying islands, is prone to the effects of climate change including rising sea level, which is also a threat to the Seychelles archipelago of 115 islands.

Michel has highlighted that the latest disaster underlines the vulnerability of small island states.

“…this is why one of the fundamental foreign policy objectives of Seychelles has been to mobilise the international community to adopt a special Vulnerability Index to address the inherent vulnerabilities of SIDS,” he said.

“The cyclone, which has just struck Vanuatu – a sister small island state – with such catastrophic effects and the tragic loss of lives is a clear manifestation of climate change, which some persist to deny. Today it is the South Pacific, tomorrow it could be us. When will the international community wake up to reality and put our efforts and resources to get a binding agreement to reduce global warming and sustain the survival of our planet?"

Stressing that the tragic situation in Vanuatu serves as a "stark reminder to the international community" of the real and devastating consequences of climate change the Seychelles President has reaffirmed to continue working with Vanuatu and other small island developing states to incite meaningful action on climate change.

Vanuatu is considered to be a lower middle-income country with a GDP of $828.2 million (World Bank Figures of 2013).

About two-thirds of the country’s population of around 250,000 rely on agriculture for a living with fishing, tourism and offshore financial services being the other main sectors of the economy.