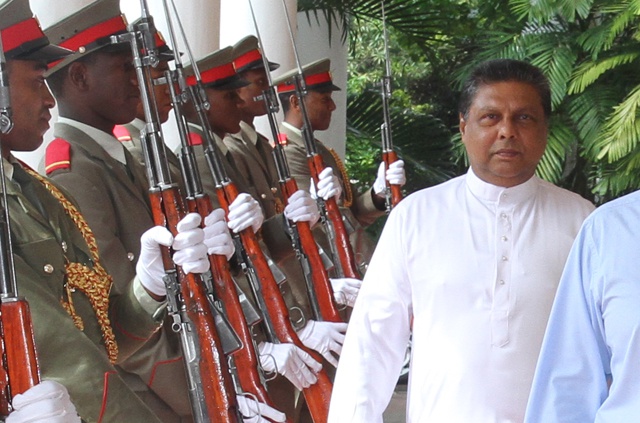 A guard of honour salutes the resident Sri Lankan High Commissioner to Seychelles, Rajatha Piyatissa upon his arrival at State House for his accreditation in June last year. (Mervyn Marie, Seychelles News Agency)

(Seychelles News Agency) - The outgoing Sri Lankan High Commissioner to Seychelles, Rajatha Piyatissa, who is leaving the island nation on Saturday, has said that he expects the relationship between the two countries “to be stronger in the future”.

Piyatissa, who was the head of his country’s diplomatic mission in the Indian Ocean archipelago for a little over eight months, was speaking to the local press after he had paid a farewell call on the Seychelles President James Michel at State House, in the archipelago’s capital of Victoria on Tuesday.

“No government wants a bad relationship with other countries, so I don’t expect the person coming or the future governments to change their policy towards Seychelles. One thing is we are both in the Commonwealth and most importantly Seychelles has been our friend - you have stood by us at every international forum," he said.

It was rumoured in January that he is one of a number of top-level diplomats throughout the world who are being recalled by the new administration of Sri Lankan President Maithripala Sirisena.

Piyatissa confirmed to SNA on Friday that he had been recalled to Sri Lanka.

It is not yet known when his successor will be accredited.

The Sri Lankan diplomat has described the bilateral relations between the two countries as very strong, adding that cooperation in a number of areas have greatly improved during the past months that he has been here.

“I think first and foremost establishing the high commission itself was a success, but since then you are aware ...We have established a branch of the Bank of Ceylon, the premiere bank of Sri Lanka here in Seychelles and the Sri Lanka Insurance Corporation, the leading insurer of Sri Lanka has established a branch here, also a health centre, the Nawaloka hospital… those have been a great achievements for Sri Lanka because they are serving both our countries,” he said in Tuesday’s interview.

“Trade has improved in a very rapid manner plus I would say Seychelles have gained a lot from Sri Lanka especially in manpower professional skilled and unskilled…Seychellois people have been coming to Sri Lanka mostly for health care, tourism and trade…so I would say Sri Lanka and Seychelles have got very close since we established our high commission in June 2014.”

According to a press statement issued by State House, during discussions with the outgoing High Commissioner, the Seychellois Head of State pointed out that “Seychelles value its relationship with Sri Lanka and that his government would like to see it develop further.”

“The President said that he hopes that the successor of High Commissioner Piyatissa will continue the good work that he has started to further develop diplomatic ties between the two country,” reads the statement.