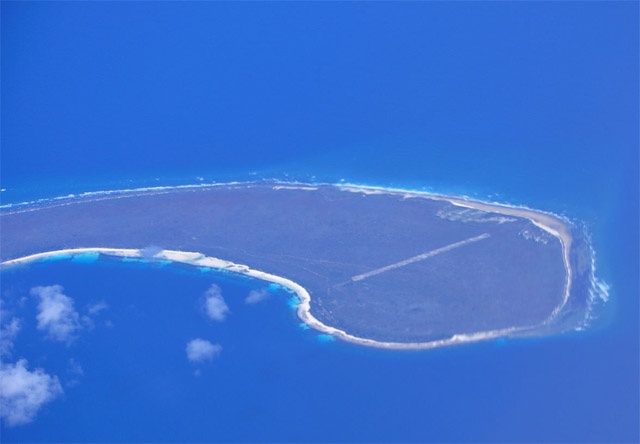 Assumption Island. Plans are underway to have a “forward base” for the SPDF mainly the coast guard on the island. (Wikipedia) Photo License: (CC BY-SA 3.0)

(Seychelles News Agency) - The remote island of Assumption, situated some 1,140 southwest of the Seychelles main island of Mahé, currently features little activity but things are set to change following the recent announcement that facilities will be developed on the island.

This was the subject of a memorandum of understanding signed during the official visit of the of Indian Prime Minister Narendra Modi to the Indian Ocean island nation last week.

While the Seychelles government did not release much details pertaining to the exact terms of the agreement, Assumption has been mentioned in quite a few articles in the Indian press.

The Economic Times and several others have reported that the Indian Ocean island nation has agreed to “lease Assumption Island…to India for infrastructure development.”

Responding to SNA in an interview on Thursday, the Chief of Staff of the Seychelles People’s Defence Forces (SPDF) Lieutenant Colonel Michael Rosette said that “there is no lease agreement” and that the memorandum of understanding signed is for the Indian government to help the Seychelles government through the SPDF to build military infrastructures on Assumption.

He said the infrastructures will include quarters for the Seychelles Coast Guard personnel and the fixing up of the jetty and existing airstrip on the island to have a “forward base” for the SPDF mainly the coast guard.

“The facility on assumption will also have modern equipment to enable coast guard to have its vessels and air force plane on the island,” said Lt Col. Rosette.

India and Seychelles have had cooperation in the field of defence and maritime security for many years, which has seen India helping to patrol the Seychelles waters and gifting several equipment to the SPDF.

Rosette confirmed that India and other international partners involved in the fight against piracy and other illicit maritime activities in the region will also be able to use the facilities on Assumption.

Port Victoria, the port of the capital of the Seychelles archipelago, is currently a popular port of call for rest and recreation for military vessels based in the Gulf of Aden and Horn of Africa involved in different international anti-piracy missions in the region, including Operation Atalanta, the European Union’s counter-piracy operation off the coast of Somalia.

The Seychelles, an archipelago of 115 islands, has a total land area of 455 km² spread over an Exclusive Economic Zone of 1.3 million square km.

The Coast Guard base on Assumption is viewed by the SPDF as an ideal location that will allow the Seychelles military to better undertake surveillance of the EEZ and respond faster and more efficiently in cases of reported incidents in the area.

According to Rosette, currently it would take over 40 hours to dispatch a coast guard vessel and 3 hours to dispatch a military surveillance plane if an incident occurred in the area while arguing that being stationed there would cut the response time to around 4 to 5 hours.

Assumption might be pretty uneventful, but it is a nesting site for turtles and its surrounding waters, is frequented by chartered yachts for diving purposes.

The islands’ airstrip built some 25 years ago also allows aircraft from Mahé to bring in mainly scientists visiting neighbouring the archipelago’s UNESCO World Heritage site of Aldabra, which is densely populated by Aldabra giant tortoises – over 150 000 of them (greater than the Seychelles population of around 90,000 people) – and a wide variety of birdlife, marine life and exotic species that call the islands their home.

So the question which may arise is what impact such a development in the area can have on the surrounding eco-system.

SNA on Wednesday spoke to Paul Rose, the expedition leader of the National Geographic Pristine Seas scientific expedition currently being conducted in the Seychelles about the development of military infrastructure on the island, since his team were at the time conducting their research on the island.

“I knew there was an interest there from the Indian government, and an agreement with the Seychellois government, and I must say my first knee-jerk reaction is that it’s a good thing, because you know, it’s very very hard to monitor and enforce these remote places – how do you know if there’s foreign fishermen coming in, getting turtles? How do you know if foreign fishermen are coming in with big ships and getting sea cucumbers? We only know if we’re there, so my immediate reaction is that if there’s a military operation there, it means that it’s an easy step to go from there, to get aircraft up, to have ships in the water, and it becomes less of an attractive target to the illegal fishermen, so I actually think it’s a good thing and I would expect that, well Assumption isn’t that big of an island so I can’t imagine that it would be a huge base, so if it is built smartly and managed smartly, which is the Seychellois method after all, I think this is a good thing,” he said.

The view that military presence will help to safeguard the region’s marine species in the region is shared by the Seychelles Islands Foundation, SIF, a public trust established in 1979 to manage and protect the UNESCO World Heritage site of Aldabra.

“We do not know the exact development that is to take place on Assumption, but any military presence in this group of islands will contribute towards the protection of the marine resources in that region,” SIF’s Chief Executive Officer Dr Frauke Fleischer-Dogley told SNA in a phone interview.

“A military presence on Assumption is also good as Mahé [the main Seychelles island] is quite far from Aldabra, and in case there is a problem it takes quite a long time for the Coast Guards to get there.”

The SPDF’s Chief of Staff has said that the necessary environmental assessments have been carried out which has allowed them to “come to the conclusion that the area is ideal.”

The project is said to be still in the conception phase and there is no clear cost attributed to it at the moment.