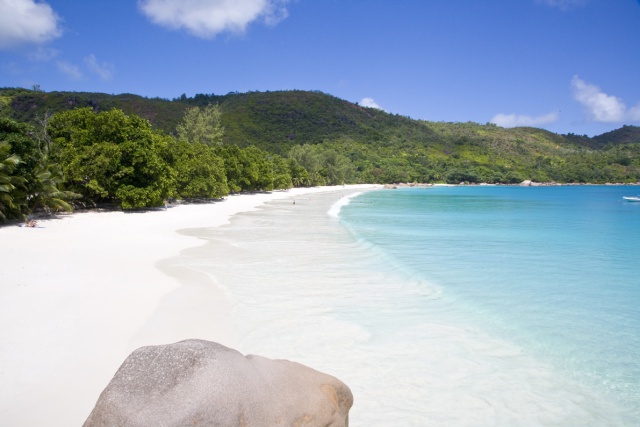 Powder-white beaches and crystal-clear azure waters of the Seychelles. Visitors in search of such holiday destination research online before visiting or booking a hotel. Reviews posted on the Tripadvisor website in 2014 have earned over 100 tourism businesses in Seychelles a Certificate of Excellence. (Gerard Larose, Seychelles Tourism Board)

(Seychelles News Agency) - Visitors to Seychelles come from different corners of the world, at times flying thousands of kilometres to the Indian Ocean archipelago of 115 islands which boast beautiful white beaches in lush tropical vegetation.

For most of these visitors, holidays are planned well in advance, with much research done about the destination including about the weather but also about the products on offer, from accommodation and restaurants to leisure activities.

It is estimated that presently, around 70 percent of travellers research online before visiting a destination or booking a hotel.

TripAdvisor, considered one of the world’s largest user-reviewed travel sites which helps visitors to plan and book holiday trips worldwide, is often used for such research.

Operating in over 40 countries worldwide reaching over 300 million unique visitors per month, TripAdvisor also rates destinations, hotels, beaches and other attractions based on reviews and opinions posted by travellers.

Based on these reviews, TripAdvisor awards Certificates of Excellence to tourism businesses that excel in giving their clients a positive experience.

While many of Seychelles’ tourism offerings have been highly rated by TripAdvisor over the years, 2015 is the first time a TripAdvisor awards ceremony has been organised in the Indian Ocean island nation, which saw over 100 hotels, guesthouses, self-catering apartments, boat and dive operators being presented with TripAdvisor Certificates of Excellence for 2014 based on reviews by their clients.

The event held at the Savoy Resort and Spa in the northern district of Beau Vallon on the Seychelles main island of Mahé, was organised by the Seychelles Tourism Board (STB).

"It provides adequate proof that our islands stand at the forefront of change and embrace the way that the consumer has direct access to knowledge of tourism products and services all over the world," said STB’s Chief Executive, Sherin Naiken at the ceremony on Wednesday.

She said that today, the tourist is king or queen in the business and high standards must be maintained in what has become an increasingly transparent, consumer-weighted process.

Tourism has long been the primary pillar of the Seychelles economy.

Speaking at Wednesday’s event, the Seychelles Minister for Tourism and Culture Alain St Ange noted that the industry is one that is constantly evolving adding that the evolution of TripAdvisor and social media are tools which travellers use to base their choices of vacations.

"Selection by patrons of several years is feather in your cap. But even a negative comment and the way you handle it, can get you better informed and improve your service or product," he said.

TripAdvisor's Destination Marketing Manager for sub-Saharan Africa, Chad Shiver, who made the trip to Seychelles noted that awarding Certificates of Excellence is quite a complex process.

“TripAdvisor awards the certificate of excellence awards every year to business owners that have proven positive impact on the local tourism industry, and contribute to a great reputation for their country’s international reputation," said Shiver.

"The way we decide on who is presented with these awards is quite complex but the basics are: the property must maintain an overall TripAdvisor rating of at least four out of five; achieve a set minimum number of reviews and have been listed on TripAdvisor for the full previous 12 months," he explained. "Another key factor in awarding a certificate is the property’s popularity ranking on TripAdvisor, meaning that you must excel when compared to your local competitors.”

Shiver later told SNA that this allows hoteliers and other tourism operators to interact with their clients.

"They are encouraged to respond and show their care vis-a-vis customers."

Domaine de La Reserve, a hotel found on the Seychelles second most populated island of Praslin was one of the 15 large hotels that received a TripAdvisor Certificate of Excellence and its Assistant Manager Lorna Awale told SNA this was also the case for 2012 and 2013.

She said the 40-room hotel tucked in the secluded beach of Anse Petite Cour, overlooking Curieuse Island and its marine park off Praslin's east coast, has always been an attraction in itself.

"We also pride ourselves of our Creole culture, reflected in the architecture of our villas and our restaurants, offering a variety of local dishes. Over 90 percent of the hotel staff are also Seychellois," said Awale.

Among the small hotels, Villas des Jardins, was one of the category’s 33 winners.

The seven-villa establishment is located at Port Glaud, on Mahe's west coast with a view of the nearby islands of Therese and Conception. It is Czech-owned and managed by Ulrike Amade, a German national who is married to a Seychellois.

Trek Diving, based at on the Seychelles third most populated island of La Digue which sets out regularly with parties of eight tourists for popular diving sites around the island and neighbouring Praslin, was the only TripAdvisor winner in the divers’ category.

STB also took the opportunity to organise social media training for the tourism trade which was led by TripAdvisor’s Chad Shiver and Damian Cook, the Chief Executive of E-Tourism Frontiers, which is a global programme that develops online tourism in emerging markets worldwide.

The training was aimed at getting people working in the tourism industry to learn how to make better use of digital marketing platforms such as Facebook, Twitter, Youtube and Instagram to market their products and services.