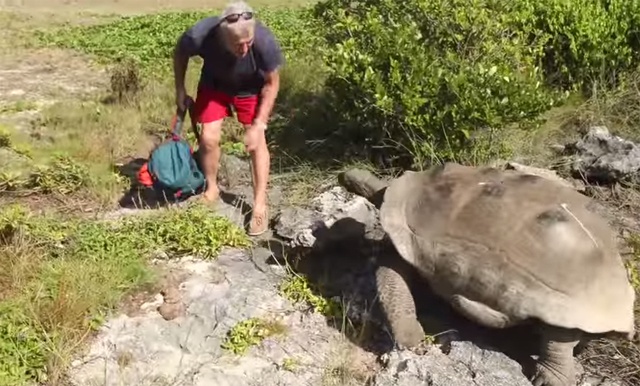 Unexpected aggression: National Geographic scientific expedition leader Paul Rose, currently exploring the outer islands of the Seychelles, gets on the wrong side of an Aldabra giant tortoise ((Neil Gelinas/National Geographic/YouTube)

(Seychelles News Agency) - Although Assumption Island, located in one of the most remote and uninhabited quarters of the vast Seychelles archipelago of 115 islands, is notable for a variety of reasons, this week it received worldwide attention for being the location of one of the slowest hot pursuits in history.

With a National Geographic scientific exploration team scouring the area for interesting subjects to document, the expedition leader, Paul Rose, and his film producer Neil Gelinas got a little more than they bargained for when they happened upon a pair of Aldabra giant tortoises in the act of mating.

After investigating the source of the loud, distinctive noises from some distance away across the 11-square-kilometre island, Rose was quite excited to document the experience. Gelinas set up the camera nearby in the grass and started rolling, but it seems the tortoises were not too happy about their privacy being so rudely invaded.

Aldabra giant tortoises, which originate from the Aldabra atoll, a UNESCO World Heritage Site situated about 30 kilometres away, are one of the largest species of giant tortoises in the world, and at an average weight of 250 kilograms, male tortoises can be aggressive and territorial creatures not to be interfered with, particularly during the mating season.

According to Rose’s latest Pristine Seas blog post, the male tortoise began lumbering purposely towards him and the cameraman, clearly intending to take care of any unwelcome trespassers.

Shortly after Rose was heard whispering to hold their position, Gelinas was forced to pick up his camera and head for safety, leaving Rose to face the music on his own, slowly backing away as the tortoise advanced, hissing and snapping his sharp beak, designed for ripping low-lying branches and fruits from trees.

“I assumed that he would get close and then back off once he realized that he was up against two wonderful specimens at the top of the food chain,” wrote Rose. “But there was absolutely no stopping him - he got close, very close, close enough that his snorting and spitting plus the look in his enraged eyes above his snapping powerful beak made us retreat in a panic.”

A relentless but slow 400-metre pursuit followed, with Rose, now more amused than worried, waiting to see when his angry pursuer would give up the chase.

“There was no doubt that he would not stop until he had seen me off the island, preferably with significant pieces missing from my legs,” said Rose. “And so we began a ludicrous, disconcerting, low-speed chase that took us across the low grass stubble and the adjacent concrete runway and alongside the bushes. If I hadn’t put on a good finishing sprint we would still be at it.”

The video footage, which has since been uploaded to YouTube, has received almost 150,000 views .

Assumption was first discovered on 14 August 1756 by Captain Nicolas Morphey, who named it after the religious feast of the following day. Home to a variety of seabirds, the island’s phosphorous-rich guano deposits from years of nesting seabirds’ deposits were recorded as 50 feet thick in some places.

The first settlement was built in 1909, the tall trees were cut down, and guano extraction commenced. By 1937, the last of the island’s 160,000 tonnes of guano had been scraped from the rocks, and its giant tortoises, endemic birds and seabirds were lost, leaving a desolate wasteland covered in a mat of creepers.

Today, the island’s airstrip, constructed 25 years ago, serves as the only air connection for scientists conducting research in the strictly managed and jealously-guarded Aldabra atoll, which is accessible only by boat.

Below water, however, Assumption’s coral reefs are among the most beautiful in the world, and much of Jacques Cousteau’s famous underwater 1956 film The Silent World was shot around Assumption and Aldabra.

From an interview conducted on Thursday 19 March with the Chief of Staff of the Seychelles People’s Defence Forces (SPDF), Lieutenant Colonel Michael Rosette told SNA that the infrastructure will include quarters for Seychelles Coast Guard personnel and the fixing up of the jetty and existing airstrip on the island.

Rosette said the Seychelles government intend to beef up regional anti-piracy activities and help guard against illegal poaching and fishing in the remote area.