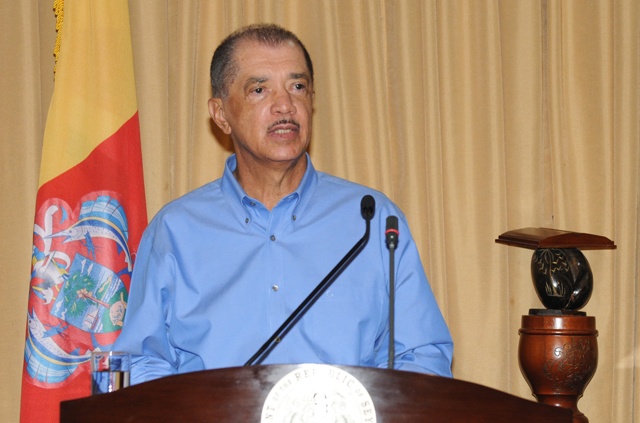 James Michel delivering the State of the Nation Address at the National Assembly, February 26, 2014 (Seychelles Nation)

(Seychelles News Agency) - The Seychelles islands will in June this year get a new symbol aimed at promoting national unity, the archipelago’s President James Michel announced in his State-of-the-Nation Address this afternoon.

"A powerful symbol with the aim of removing certain rancour, which may still linger in our nation, and of consolidating national unity. You all know the importance that I attach to national unity and to harmony within our people," said Michel, who did not give any details about the new symbol.

Michel highlighted some of the country’s main achievements in 2013 including the solid economic progress in 2013 when Seychelles recorded economic growth of 3.5 percent, as well as the highest foreign exchange reserves in the history of the Indian Ocean island country, which topped US $ 435 million.

The amount represents over 4 months of importation of goods.

In 2013, 3,200 new jobs were created, although he said 602 persons are currently unemployed, noting the country has also attained nearly all of the eight Millennium Development Goals, and is considered a country with high human development index, being ranked 46th out of 186 countries of the UN Human Development Index.

Seychelles is also first in Africa in the international ranking for telecommunications and access to information technology, Michel noted.

"Our accomplishments are a source of motivation and inspiration for us and many other countries. But does that mean that everything is going well in our country? No! No, there are still many deficiencies. There is even a voice that says that there is a deficit of moral and spiritual values in our society.There are still problems that we must resolve in order to take the New Seychelles even further. Even further on the road to prosperity. Greater happiness for our people. Let us join our efforts. Let us remain determined. Let us take our responsibilities!"

The president called on all Seychellois to join him in accepting responsibility for the future of the country and continuing to safeguard the well-being and happiness of its children.

"Seychelles is on the right path. We must keep our country on this right path. Our journey continues, with determination... Join me in continuing to create a solid economy where hard work will be rewarded. Join me in combating the scourges that afflict our society.

When addressing the country’s priorities for 2014 the president placed emphasis on the fisheries industry as well as on creating more opportunities and ensuring the availability of adequate resources to allow the creation of new business as well as the growth of existing ones.

The head of state also addressed the issue of law and order as well as social ills especially drug trafficking, whereby he stressed that work is starting on new laws that will provide for harsher sentences for traffickers.

The leader of the Opposition in the National Assembly David Pierre gave his initial reaction to SNA on President Michel’s State of the Nation address where he focused on the issue of national unity.

“When the president speaks about national unity it makes me realize that he has failed to take every opportunity over the last 10 years to create the necessary framework and platform to allow the nation to complete the process to bring about true national unity in our small nation,” said Pierre.