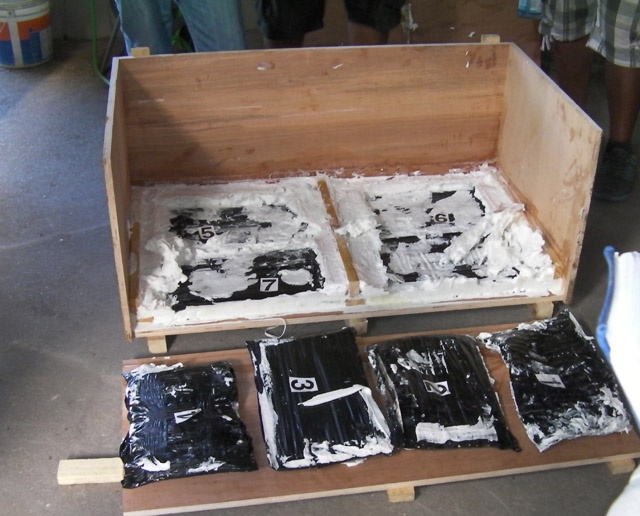 The drugs that were concealed in the false bottom of one of three wooden boxes seized by the NDEA on Saturday. (NDEA)

(Seychelles News Agency) - Three people appeared before the Seychelles Magistrates court this morning in connection with the seizure by the Seychelles National Drugs Enforcement Agency, the NDEA, of a substantial amount of drugs at the weekend.

The two men and one woman have been remanded in custody until April 6 while the agency continues with its investigation into the matter.

The NDEA intercepted 32 kilograms of what is believed to be heroin, during an operation on Saturday afternoon, in an area known as Souvenir, La Misère, a few kilometres south of the Seychelles capital of Victoria.

Two of the three suspects, one man and the woman were arrested immediately after the seizure while the third one was arrested during a follow-up operation on Sunday.

Speaking to SNA this afternoon, the NDEA’s Deputy Chief Officer Liam Quinn said the trio comprised of a former customs clearing agent, a customs officer and the driver of a pick-up truck.

The NDEA said on Saturday that the drugs had recently arrived in the country.

Quinn confirmed this afternoon that the consignment “had come in from Dubai" and that the drugs were concealed in the "false bottoms of three wooden boxes containing hardware supplies."

The drugs, the NDEA has said is the largest amount of heroin to be imported into the country, with a street value of over $8 million (approximately 112 million Seychelles rupees) which the NDEA said equates to about 10 times the amount of heroin seized in a normal year.

In a news report aired this evening, on the national radio station, SBC, the NDEA’s Chief Officer Niall Scully said intelligence gathered showed that several local drug traffickers had pooled together some $1 million to purchase the heroin together.

“We are confident based on the knowledge that we have at hand that we will be able to move against the individuals and the group who are responsible for organising the shipment of that consignment into Seychelles,” added Scully.