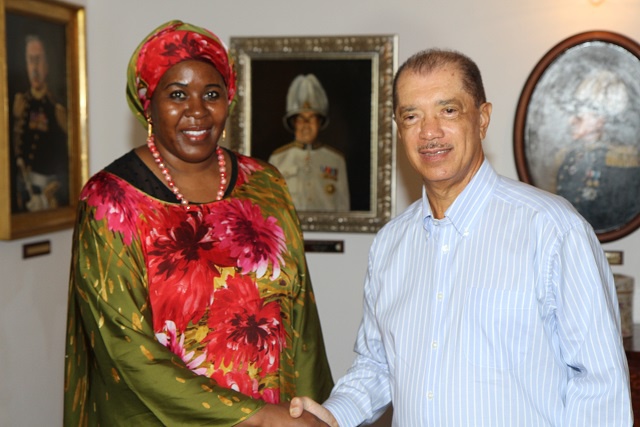 (Seychelles News Agency) - The outgoing High Commissioner of Tanzania to Seychelles, Dr Batilda S. Burian, has come to the end of her tenure, but has said she is keen on becoming an advocate for the blue economy concept as promoted by the Seychelles when she takes up her next post in Japan.

The Tanzanian diplomat, who will be the next ambassador of her country to Japan, said this at the end of her one and a half year mandate in the Indian Ocean island archipelago of 115 islands.

Dr Burian was speaking to journalists after she had paid a farewell call on the Seychelles President James Michel, at State House, in the archipelago’s capital of Victoria this morning, where they reviewed the existing cooperation between the two countries.

“We’ve talked about the blue economy and I’ve promised and have assured the president that on my new responsibility as ambassador of Tanzania to Tokyo, I will continue to advocate and bring awareness on the issue of blue economy for sustainability,” she said.

Burian also highlighted the areas where bilateral relations have been further developed during her mandate in spite of her being based in Nairobi, Kenya, as well as those expected in the foreseeable future.

“Without having an office here, we’ve been able to move in terms of our bilateral cooperation. Our ministries in charge of aviation were able to sign a memorandum of understanding which has enabled Air Seychelles to start its scheduled flights to Dar es Salaam twice a week. But we also have bilateral agreements that will soon be signed on exchange of prisoners as well as investment where the Seychelles Investment Bureau will cooperate with the Tanzania Investment Centre.”

The Seychelles national carrier started flying to Dar es Salaam in December last year, with both sides expressing hope that tourism and trade would be improved between the two countries.

The Seychelles Honorary Consul in Tanzania, Maryvonne Pool, who has lived in the eastern African nation for 31 years, said at the time that many entrepreneurs in Tanzania had shown interest in exporting various products, such as fresh seafood, to Seychelles.

In a press statement issued this afternoon, State House said President Michel thanked High Commissioner Burian for her valuable contribution to further enhance the bilateral relations between Seychelles and Tanzania, noting "the strong historical links" that exist between the two sides.

Burian has highlighted her country’s intention to have a permanent diplomatic mission in Seychelles by setting up an office for the Honorary Consul of Tanzania.