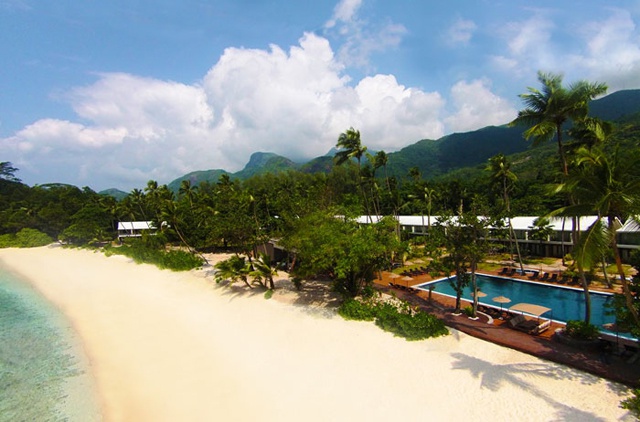 An aerial view of the new AVANI hotel in Seychelles, situated at Barbarons on the western coast of the main island of Mahé (AVANI Seychelles Barbarons Resort & Spa)

The hotel closed in 2014 to make way for a major revamp to the hotel’s decor by its owners, Mauritian company Currimjee Jeewanjee, costing around $8 million.

At its glitzy official opening ceremony on March 14, attended by the who’s-who of Seychelles, including Vice-President Danny Faure and Tourism and Culture Minister Alain St. Ange, the stylish new facilities were unveiled, including the upgraded conference facilities and pool area.

The Minor International group of hotels, which owns the AVANI brand, was represented by its Chairman and CEO William Heinecke, and Currimjee Jeewanjee’s Managing Director Anil Currimjee was also present.

According to AVANI Barbarons’ Sales and Marketing Manager, Anna Pothin, the resort’s two new restaurants offer something for every palate; ‘Elements’ – which offers home-style ‘comfort foods’ and fresh seafood dishes with international and Creole flavours and ‘Tamarind’, which serves authentic Pan-Asian cuisine with a modern, creative twist.

“The focus is mainly on European source markets but we are also looking at Asia as a secondary market for Seychelles,” said Pothin, in an email interview with SNA. “For the Asian market, we have Asian cuisine... with Tamarind, our Pan-Asian restaurant.”

Pothin said the reception had been positive, both by the local tourism sector stakeholders and tourists.

“So far, business pace is very good and we are being well liked and received on the local market.”

One of the oldest existing hotels still in operation in the country of 90,000 people, the buildings at the serene Barbarons beach have stood the test of time, holding many happy memories for both tourists and locals alike since its original opening in 1978.

Always a favourite location among Seychellois for weddings, conferences and year-end corporate functions, the AVANI hotel will be looking towards securing the hotel’s future popularity with residents of the Seychelles with upcoming residential offers.

As for overseas guests, rates start from 160 Euros (around $175) per room per night, including breakfast.

Pothin said that the hotel currently has 140 members of staff, 10 percent of which had stayed on from the old Le Meridien Barbarons Resort.

With over 120 hotels and resorts in 21 countries across Asia Pacific, the Middle East, Africa, the Indian Ocean, Europe and South America, AVANI Barbarons is the first resort in the Seychelles and the Indian Ocean in its portfolio, although according to an announcement made by Heineke at the Barbarons opening ceremony, a project is currently in the pipeline in Mauritius under Minor International's five-star brand Anantara.

Hotel rates are seasonal and may fluctuate based on the time of year. For more information on reservations, visit the AVANI Seychelles Barbarons website.