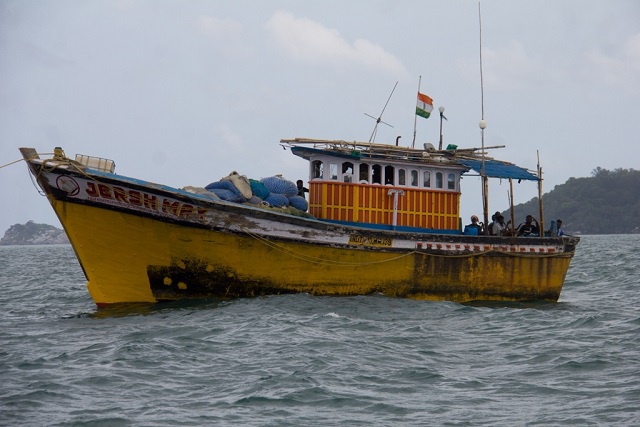 ‘Jersh-Max' (pictured) one of the two Indian-flagged vessels, that were intercepted on 28 January by coast guard vessels and escorted to the Seychelles' main port of Victoria. (Seychelles Coast Guard)

(Seychelles News Agency) - The captains of two Indian-flagged fishing vessels have been released almost two months after they were intercepted in the Seychelles waters on suspicion of illegal fishing.

The Seychelles Attorney General’s office have confirmed to SNA that the two men, M. Jerine and S. Gracious, were freed on Tuesday March 24, due to a lack of evidence.

Jerine and Gracious were together with nineteen other Indian fishermen when the Indian Ocean  archipelago’s Coast Guard intercepted their vessels on January 28.

The captains were left to face prosecution under the Fisheries Act of 1986 after their nineteen fellow fishermen were released and repatriated to India on an Air Seychelles flight on Tuesday March 3.

The Act was recently amended in January this year to reflect Seychelles' ratification of various regional and international treaties and legal instruments to prevent illegal fishing.

Under the new terms of the Act, penalties for illegal fisheries range in severity based on the size of the boat suspected of infringing the law, but can carry a maximum penalty of over 31 million Seychelles rupees (around $2.3 million) for large vessels of over 50 metres in length.

According to the Attorney General, after analysing the different elements of case, the decision was taken to withdraw the charges against the two captains, because their satellite navigation system or Global Positioning System (GPS) showed that their vessels were outside of the Seychelles territorial waters.

"The data available from the GPS of one of the two boats showed that they were at the border of the Seychelles territorial waters. The GPS of the second boat was not working. All the movements of the two vessels were outside our waters. According to the captains, their GPS was not calibrated properly,” the Attorney General, Ronny Govinden, explained to SNA.

According to Govinden, these elements would have weakened the prosecution’s case.

The vessels, 'Rehoboth' and 'Jersh-Max' were intercepted near the island of Desroches, South East of the Seychelles main island of Mahé, after local fishermen alerted the Seychelles Coast Guard that they had been spotted pulling up their nets.

According Govinden, the fishermen could not say exactly, if what the Indian fishermen were pulling up were fishing nets or the anchor.

"The presence of fishing vessels in the Seychelles waters is not prohibited, it was up to us to prove that they had committed an illegal act," said Govinden.

The release of these two captains comes two weeks after the official visit of the Indian Prime Minister Narendra Modi to Seychelles.

According to an article published in the Times of India, five Indian are expected to fly to Seychelles to assist the captains in repairing their vessels before sailing back to their homeland.