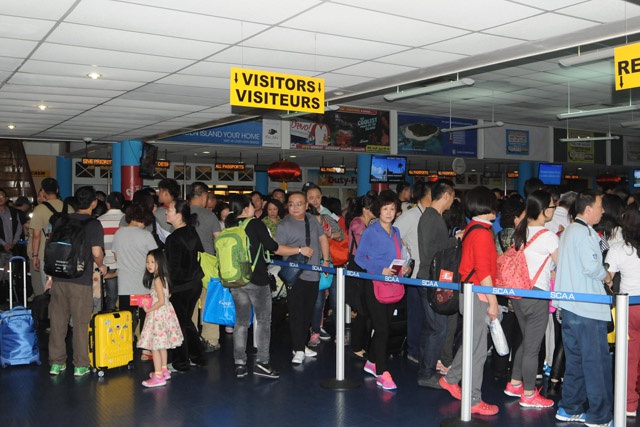 Chinese tourists going through immigration procedures at the Seychelles International airport. IMF has revised its predicted growth for the island nation taking into account the recovery of the country's tourism arrivals. (Patrick Joubert, Seychelles News Agency)

(Seychelles News Agency) - The International Monetary Fund has revised its projected growth for the Seychelles back up to three and a half percent for 2015, citing the appreciation of the Seychelles rupee and the recovery of the island nation’s tourism arrivals.

Wide-ranging economic reforms were initiated by the Seychelles government in 2008 with the assistance of the Bretton Woods institution following the global financial crisis when the country was plagued with crippling levels of external debt.

According to the latest figures from the National Bureau of Statistics, visitor arrivals to the Seychelles have shown a considerable increase. A total of 57,206 visitors arrived in Seychelles from the beginning of the year until the twelfth week of 2015, a total increase of 10 percent from the same period the year before (52,056).

Tourism slowed during the first half of 2014, recovering slightly at the end of the year to end off with a one percent increase in arrivals from the previous year.

After the IMF’s last visit to the 115-island Indian Ocean archipelago, Seychelles’ projected growth was downgraded in December 2014 from 3.7 percent to a dismal 2.8 percent, primarily due to the depreciation of the rupee and a rampant demand for foreign exchange.

The Central Bank of Seychelles (CBS)’s decided in September 2014 to tighten the reserve money target for the fourth quarter of the year and maintain this stance into 2015 as a “strong response” designed to dampen inflationary second-round effects of the depreciation, and the IMF’s mission chief,  Marshall Mills, speaking at a post-mission conference on Thursday afternoon, praised the reserve bank’s actions.

Mills said that the Seychelles government had implemented a policy framework over the past six to nine months to manage external shocks.

“Last year there were a number of shocks; one in the tourism sector with flat arrivals, and also domestically there was very strong demand for imports due to credit growth and rapidly rising wages,” he said.“The policy framework that’s in place and that’s been strengthened by the authorities managed these pressures impressively well, we believe – including tightening monetary policy and relying on exchange rate flexibility – so the situation stabilised over a relatively short period of time.”

Monetary policy is expected to remain tight to rein in knock-on inflationary pressures and help moderate credit growth. According to the mission statement, inflation is expected to come in under five percent for the year.

The Seychelles Minister of Finance, Trade and the Blue Economy, Jean Paul Adam, said that the rate at which the commercial banks were lending to the public needed to be carefully monitored.

“I think one of the very interesting trends was the increase in private sector lending,” he said.

“The amount of loans that the private sector has taken and is investing in the economy – which is an opportunity and is a good thing – but it is also something we have to monitor very carefully that it doesn’t lead to other pressures in the economy.”

Minister Adam added that the current rise in tourism arrivals was not to be taken for granted.