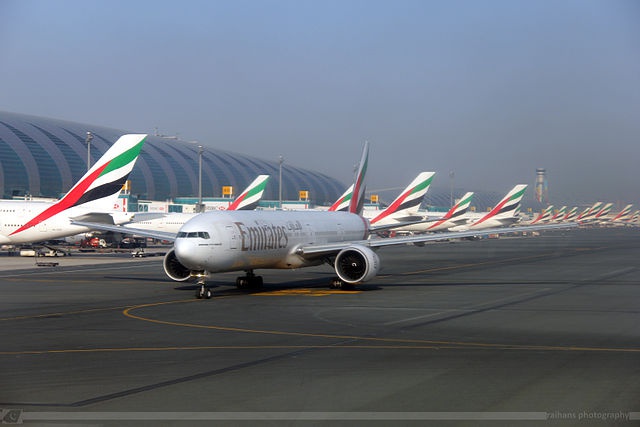 Emirates operations at Dubai International airport. Emirates flights are amongst those that have to make a detour because of Yemen's Civil Aviation Authority to close its airspace. (Wikipedia) Photo License: (CC BY-SA 2.0)

(Seychelles News Agency) - Flights to the Seychelles islands from Dubai and Abu Dhabi in the United Arab Emirates are taking between 45 minutes to an hour longer as a result of the closure of Yemen’s airspace by its civil aviation authority yesterday.

Yemen took the decision in the wake of the civil war that has erupted in the region, and the start of an aerial bombing campaign by a Saudi Arabian-led Arab coalition to target Huthi Shiite rebels and support Yemen's President Abedrabbo Mansour Hadi, who has fled the country. He is currently staying in the Saudi capital of Riyadh.

The three airlines now have to make a detour by flying towards the Arabian Sea and Indian Ocean using Muscat and Bombay airspace instead of flying over the Sanaa airspace.

In a press statement issued this afternoon the Seychelles Civil Aviation Authority (SCAA) said the measure “serves as a precaution to commercial aviation.”

“Seychelles as a contracted state of International Civil Aviation Authority (ICAO) has welcomed this cautious approach although this situation will bring about considerable additional costs and slightly longer flight times.”

SCAA together with the International Civil Aviation Organisation, ICAO’s Eastern and Southern African Office based in the Kenyan capital of Nairobi are closely monitoring the situation as the duration of this present situation remains unclear.

Flights to Seychelles are not the only ones being affected.

Hundreds of flights using the Yemeni airspace to access the Indian Ocean region as well as large parts of Africa from the Gulf area, including services to and from Europe, are also having to make a detour to reach their respective destinations.

SCAA’s General Manager for Air Navigation Services Esmee Samson has confirmed that Thursday, there were a number of aircraft flying over Seychelles as they travelled from Europe to other Indian Ocean islands.

The overflying has however stopped as the aircrafts are now making their detour further north of the Seychelles flight information region.