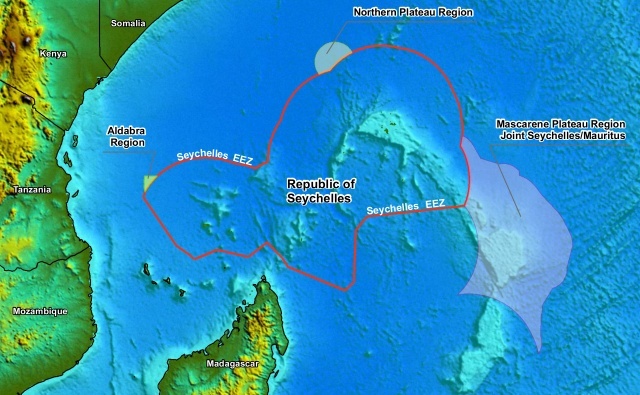 Aldabra Region (left) proposed for shared management between Tanzania and Seychelles. Also visible is area managed by Seychelles and Mauritius, and the Northern Plateau Region, a claim submitted by Seychelles to the UN. (Seychelles News Agency)

(Seychelles News Agency) - Tanzania is still considering Seychelles’ proposal of a Joint Submission to the United Nations for the shared management of an area of extended continental shelf near the Aldabra region of the Indian Ocean.

Representatives of the two sides had a second meeting on the matter from March 17 to March 19, in Dar es Salaam Tanzania.

“The Tanzanian side has requested for more time to be conclusive on their decision,” the chairman of Seychelles’ Maritime Boundary Delimitation Committee Raymond Chang-Tave has told the SNA.

“Seychelles side therefore await the decision of the Tanzanian side on the matter,” added ChangTave.

The Dar es Salaam meeting followed the first one held in the Seychelles between the two parties on January 17, 2014

The proposed area subject of the Indian Ocean archipelago’s proposal is 200 nautical miles beyond Seychelles' baselines on Aldabra island.

This is the second time Seychelles is proposing such submission to the United Nations.

The first was with Mauritius in March 2009 for the shared management of the Mascareignes plateau region, an extended continental shelf of around 396,000 sq km.

The submission was adopted by the UN in March 2011, and the two countries signed treaties for the management of the area in March 2012.

If the submission is completed and adopted by the United Nations, which can take up to two years, both countries would share the management and exploitation of any natural resources which are found in the area of shared maritime boundary.