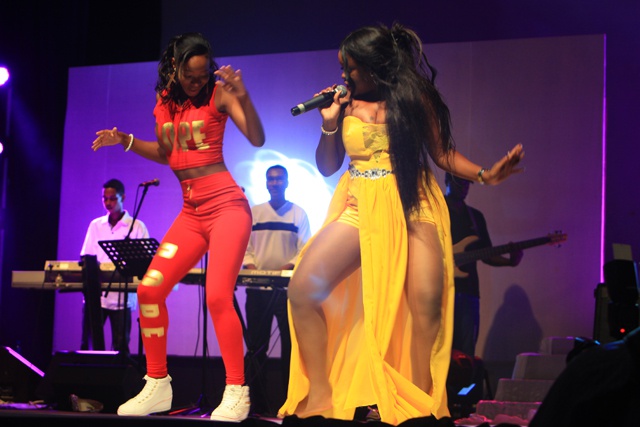 The ceremony, held every year, rewarded the best artists of the Indian Ocean archipelago for music released in 2014.

Sandra Esparon was named the 2014 Best Female Artist, while the award for Best Song went to veteran singer Jean-Marc Volcy, who won with his song "Dyelelo." Volcy also won the prize for the Best Male Artist.

Esparon, also walked away with two other awards, that of Duet, singing with Jakim, and for the Best Traditional Song. Esparon made her debut ten years ago with group 'Dezil' in 2005, with hit single 'San Ou (La Rivière) which was released in France by Sony Music, selling more than 500,000 copies in France.

Another upcoming star is 14 year old Ashley Barallon, who after taking the prize for the Best Young Artist was also presented with the People's Choice Award from Seychelles Minister for Tourism and Culture, Alain St Ange.

The award winners were pre-judged, but the audience was shown excerpts of the nominees’ songs.

Mampi's presence at the ceremony created the “big, extra and …wow effect” the organizers intended as local artists shared the staged with African talents.

Backed by the local band "Zenith", Mampi came on stage in the second part of the concert and trilled the over 500 spectators- who had purchased their tickets at $15 apiece- with her chart topper "Walilowelela," well-known among Seychelles fans.

The singer hailing from Lusaka sings in Bemba but she also performed several of her English hits in a mixture of R & B, reggae and kwaito rhythms.

Mampi, who released her debut album “Maloza” in 2005, has been performing since the age of 6 and became professional at 17, where she became an instant hit with her gyrating performances.

For her performance in the Indian Ocean Islands, she was accompanied by two Zambian female dancers who also delighted the crowd with their sensual dancing.

The show climaxed with Mampi calling for a few members of the audience to join her on stage.

Two young men and women obliged and it turned out that with one exception, they were the students from the local School of Dance.

One of them, Trisha Solomon, 19 years old, told SNA she had performed a "Soukous" to synchronize with Mampi's style. She had joined the Dance school at 8, going thrice weekly.

The organizers of the third Airtel Music Awards in Seychelles, says that Seychelles and Africa have a lot of singing talent.

“Airtel is today present in 18 African countries and we hope that just as Mampi has come from Zambia to Seychelles, it will also be possible for Seychellois singers to perform in Africa," said Airtel Seychelles CEO, Amadou Dina to the crowd towards the end of the ceremony.

In February 2014 Airtel Seychelles signed a five-year sponsorship agreement to become the main sponsor of the event which includes production, marketing and advertising. The signing was done between the Ministry of Tourism and Culture, Airtel and the producer of the music awards, Terry Carolla.

As of 2015, the music awards are only open for musicians who are members of the Seychelles Authors and Composers Society (SACS) – the sole body in Seychelles that collects royalties on behalf of artists.

Seychelles has two telecoms providers, Airtel Seychelles and Cable & Wireless Seychelles, which compete for the business of the 90,000 population.