Miss Seychelles contestant drops out after being charged with criminal offence 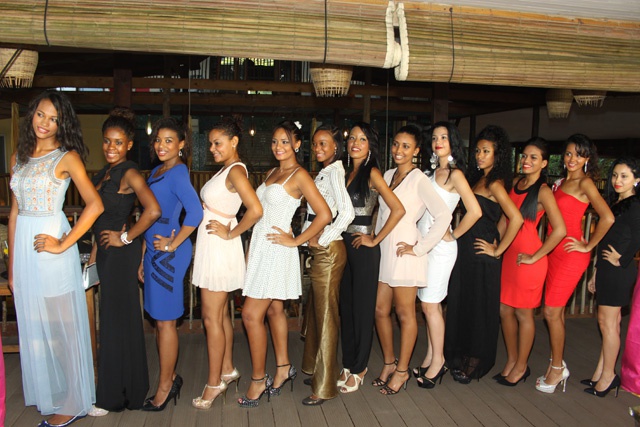 The original 13 contestants in the Miss Seychelles...Another World when they were presented to the press in February. Shanipha Semerano (pictured third from right) has pulled out of the contest after being charged with 'unlawful wounding'. (Joe Laurence, Seychelles News Agency)

(Seychelles News Agency) - A contestant in the Miss Seychelles... Another World beauty pageant, 18-year-old Shanipha Semerano, has pulled out of the contest after being charged with a criminal offence.

She appeared before the Magistrate's Court on Wednesday and was charged with 'unlawful wounding'.

Semerano, who was present at a press conference Thursday alongside Tourism and Culture Minister Alain St. Ange and Seychelles Tourism Board (STB) Chief Executive Officer Sherin Naiken, said the case could constitute an opportunity to clear her name.

St. Ange said the charge relates to an incident which occurred three years ago, when Semerano was only 15 years old, in what he termed a "childhood scuffle" with a neighbour.

He refrained from discussing the details of the case further, saying that since it was already before the court, the matter was sub judice.

Since the pageant was launched mid-February, rumours began to swirl against Semerano and the STB was criticised on social media for allowing her to participate.

Naiken however told the press that the unsubstantiated allegations were regarded as rumour-mongering at the time.

“As the organiser of the Miss Seychelles Pageant, we had attracted several good looking girls, with pleasing physical appearance and who had good profiles,” she said.

She also dismissed suggestions from members of the press that the STB was also being criticised for allowing another girl to join the contest after the deadline for entry, when the line-up had already been presented to potential sponsors.

"We were willing to be flexible to give all interested girls willing to come forward a chance. She came in just a week later,” said Naiken.

Naiken said the STB had been supportive of Semerano and “it is sad that she has to leave us half-way through the journey”.

Semerano later told SNA that she is presently studying economics, law and tourism at the School of Advanced Level Studies (SALS).

She is being represented by lawyer Nichol Gabriel and will re-appear in court on April 14.

Semerano's sister Chette-Path Semerano remains in the contest, which will be held on May 30 with 13 contestants.

While the young ladies will be judged on a number of criteria, including personal characteristics, individual talent and sporting interests, each contestant is expected to come up with a project to benefit the local community, in line with Miss World's objective of seeking “beauty with a purpose”.

Seychellois ladies have been participating in the Miss World Beauty Pageant since 1969 - with an interruption between 1976 and 1992.

The closest a Miss Seychelles has ever come to winning the Miss World Crown was in 1972 and 1974, when Janes Stravens and June Gonthier respectively made it to the top 15 finalists.

In 1998, when the Miss World pageant was staged in Seychelles, Alvina Grandcourt won the Miss Personality title.