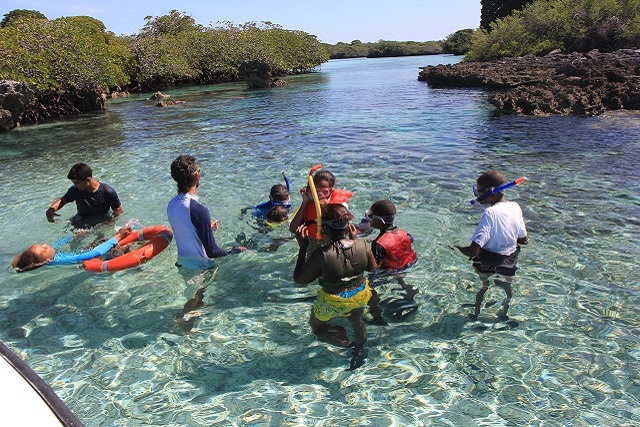 Young Seychellois environment enthusiasts making the most of their once-in-a-lifetime experience on Aldabra, the most remote atoll of the Seyhchelles archipelago. (Eco-school)

(Seychelles News Agency) - Imagine waking up to the sight of the calm waters of a lagoon teemed with an abundant marine life including a group of black-tip sharks swimming around, in one of the most remote and uninhabited quarters of the world.

This dream became a reality for twelve Seychellois students of different ages and three teachers who were lucky enough to spend four days on the Seychelles atoll of Aldabra.

Located in the westernmost part of the Indian Ocean archipelago, some 1,100 kilometres from the main island of Mahé, the world’s largest raised coral atoll is renowned for its pristine beauty, its population of land tortoises and sea turtles among other fascinating features.

It is thanks to this unique biodiversity that Aldabra was declared a World Heritage Site in November 1982 by the United Nations Scientific, Educational, Cultural and Cultural Organisation (UNESCO).

The once in a lifetime trip for the group of youngsters and their teachers to Aldabra last month was possible after the Seychelles Islands Foundation (SIF), a public trust which manages the atoll, re-initiated the annual prize for the winners of the Seychelles Eco-school competition.

This was after a lapse of five years due to the risk of piracy around the outer islands.

“From the aeroplane, I was ecstatic to see so many islands such as D'Arros and Desroches which lies between Mahe [the main island] and Assumption [the closest island to Aldabra with an airstrip]. Most of these islands were of outstanding beauty and from the sky you could see that some were unspoiled,” 17-year-old student, Jessica Farabeau who hails from the second most populated Seychelles island of Praslin told SNA.

Apart from the view, Farabeau said the trip that preceded the delights of discovering Aldabra was uneventful and that her peers were more intrigued by the landing on Assumption.

There, the school children disembarked and had a short photo session and discussion with members of the SIF chief executive officer and other members of the board of trustees who were on their way back to Mahé after participating in the organisation’s annual general meeting.

Having been warned that “you will have the time of their lives”, the students enthusiastically embarked on boats to accomplish their once-in-a-lifetime journey.

“The sea was calm but we had travelled far and waited for long hours. On the boat, you feel like you are lost in space with nothing on the horizon. It was way past four in the afternoon when at high tide we started the journey,” described Marie-Chantale Nicole a teacher from Beau Vallon school, in the northern part of Mahé.

Their first impression was that it was a big atoll but as they got closer the atoll started to reveal the secrets of why it is protected by the United Nations and the world.

Giant land tortoises, coconut crabs, birds and a few rangers mostly Seychellois greeted them once at their temporary home on Picard, the only inhabited island on the atoll.

Over the days that followed, the children who had a list of things to bring along including several swimsuits, had a busy schedule tailor-made for the nine to seventeen-year-olds with different interests.

“Everything depended on the tide but also we had only three days so we had to squeeze as much as possible within the limited days that we had,” Jeannette Larue, a board member of the SIF and the Technical Adviser for Environment Education in the Ministry of Environment, Energy and Climate Change, told SNA.

Tagging land tortoises using sensors, the monitoring of coconut crabs, weighing and measuring fish are some of the ongoing projects on Aldabra that the group were able to observe.

With visitors on the island of Picard, the rangers were also very busy preparing food, organising trips, discussing their research, taking the students out on the field and showing off the little pleasures of the Aldabra atoll.

One such pleasure was a trip around the lagoon to see the Frigate bird colony, while a frequent encounter with green turtles brought sheer happiness on the kids’ faces, although snorkelling with sharks was the highlight of the trip.

Swimming with the sharks

Taking along his camera, 15-year-old Noah Jean-Louis, an aspiring marine biologist, from Beau Vallon School shared with SNA how he has taken an avid interest in the marine life of Aldabra.

“I was very impressed with the wildlife, marine life and everything else there. Of course, I liked the sharks in front of the guesthouses, the tortoises and the coconut crabs. I was not afraid of the sharks because they were more intrigued by us and they saw us not a threat to them, so it took a bit of getting used to them,” said Jean-Louis who also posted stunning photos on his Facebook page to the envy of his friends.

“Everyone enjoyed the lagoon and we took loads of photos,” said Jessica Farabeau, adding that they made lots of other discoveries on Picard.

“Under the big corals, there are ponds and at low tide, we saw lots of jellyfish turned upside down. I had never seen that before! They were stuck together like mushrooms!”

Throughout this short journey, the students recorded their emotions in a diary that will be shared with other schools and kept as souvenirs of their momentous journey. Their last entries surely referred to their day on Assumption, where they had a friendly encounter with a group of dolphins and enjoyed several hours of snorkelling in what they described as “the clearest sea ever”.

“All my friends were really jealous of the photos I posted and I am sure they would have wanted to see all the things I did in that short time I was there,” said Noah Jean-Louis to SNA, adding that he is considering a career in the fields of conservation work or sustainable education.

“What I have seen [on Aldabra] are memories that will remain with me always!”

Aldabra boasts the world’s largest giant land tortoise population worldwide, estimated at 150,000, while the marine life in the lagoon teems with an almost incomprehensible variety of turtles, pelagic fish, rays and sharks.

Grooming for an environmentally-conscious generation

Hailing from different schools on Mahé as well as on Praslin, the Aldabra adventurers are all winners of the National Eco-school competition which is coordinated by the Seychelles Ministry of Education.

The schools are rewarded each year for their environmentally-friendly projects, initiatives and activities that are also included in the curriculum. A trip to Aldabra is considered the most prestigious prize.

“These students are the ones that are really interested in environment. They have conservation at heart and you can see that throughout their school years, from primary to secondary level,” said teacher, Marie-Chantale Nicole, emphasizing that some schools in Seychelles have at least 13 percent of their student population involved in Eco-School.

“I have learned a lot about sea turtles and the harsh reality of survival of their hatchlings and their eggs. More importantly, after the trip, I felt I needed to teach my club members on the effects of pollution. For a faraway island to have such a copious amount of debris on its shores was shocking!” remarked Nichole adding that whatever they collected were recycled into souvenirs.

“Every living thing is a survivor and the children needed to see that and I am sure they will remember the experience.”

According to SIF, such a trip to Aldabra cost over 500 thousand rupees (almost $38, 000) which is why only a handful of students are lucky enough to make it there through this yearly visit.

“I would have liked for more children and teachers to visit Aldabra but it is too expensive”, said Larue emphasizing that the expenses for the trip is covered using revenue received through the two Seychelles UNESCO World Heritage Site; Aldabra and Vallée de Mai, the latter located on Praslin.

The first Aldabra trip for Ecoschool winners was in 2009 and following last month’s resumption after the five year lapse SIF has said that “they want to continue to promote environment and conservation through these visits” as it has enticed more young people to work on the outer islands of the Seychelles.