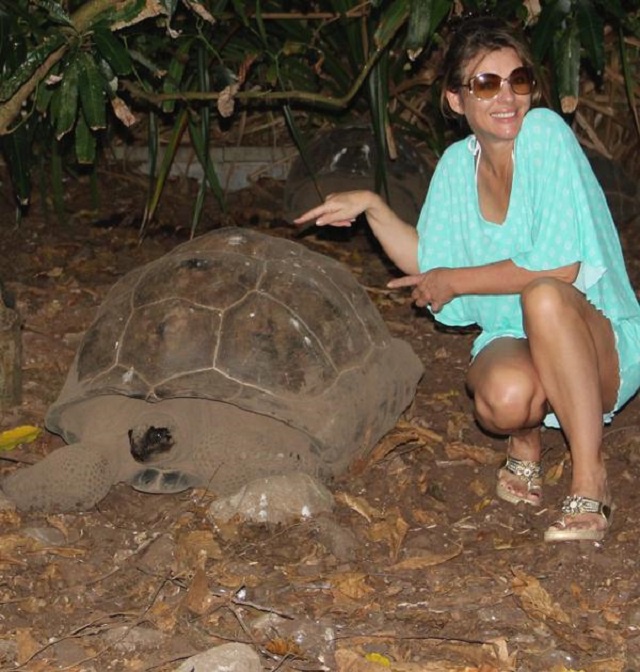 (Seychelles News Agency) - British actress currently appearing in a new American television drama series ‘The Royals’, Elizabeth ‘Liz’ Hurley seems to have stepped away from pressures of showbiz for a little while to enjoy a break in the Seychelles islands.

While many of the rich and famous who escape to the popular holiday and honeymoon destination tend to be quite discreet, the 49-year-old has not shy away from revealing her location.

Yesterday she posted pictures on her Twitter account together with her young son indicating that she is spending “Happy days, storing up happy memories” on the archipelago’s island of Fregate.

Located 56 kilometres from the main island of Mahé, the island boasts a private island resort which according to a survey conducted by Travelmag.com in June last year was revealed as the second most expensive hotel in the world behind another Seychelles island resort, ‘North Island’.

Among the pictures the actress, model and beachwear designer has been sharing with her fans on Twitter include her posing with a giant tortoise and some fish caught after a day out fishing.

Born in June 1965, Hurley who initially wanted to be a dancer has appeared in several productions after making her debut in a movie called ‘Aria’ in 1987.

Her first role in a Hollywood movie was in 1992 when she starred in the Wesley Snipes action drama “Passenger 57.”

Some of the other productions she has starred in during her acting career include “Austin Powers: International Man of Mystery,” “EDtv”, "Serving Sara" and “Bedazzled”.

Hurley also made guest appearances in the US teen drama series ‘Gossip Girl’.

Her latest role in the fictional drama about the British Royal family, she plays Queen Helena. The TV series was premiered last month and airs on E!, a US cable and satellite entertainment channel.

Hurley who launched her own beachwear line in 2005 and who has also been the face of American manufacturer of skincare, makeup, fragrance and hair products ‘Estée Lauder’ for several years gave birth to her only son in 2002.

According to her official website, becoming a mum, she made more than two dozen movies and that her personal favourites are “Austin Powers with Mike Myers, “Bedazzled” with Brendan Fraser and “The Weight of Water” with Sean Penn.

‘Liz’ as she is nicknamed is also well-known for her long-time relationship with British actor and film producer Hugh Grant who achieved international success after appearing in the British romantic comedy, ‘Four Weddings and a Funeral’ in 1994. The pair broke up in 2000.

The Seychelles islands are a popular holiday and honeymoon destination for the rich and famous. In 2011, Prince William, the Duke of Cambridge and Catherine, Duchess of Cambridge spent their honeymoon on North island.