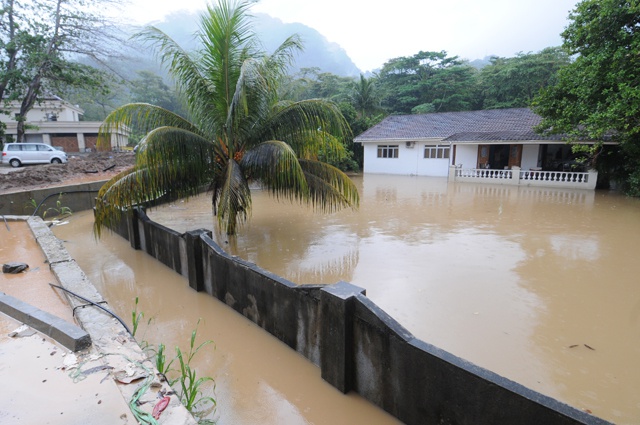 Flooding at the Beau Vallon area, next to the Savoy Resort construction (Joena Bonnelame, Seychelles Nation)

(Seychelles News Agency) - One week after flash floods in the third most populated island of the Seychelles, La Digue on January 24, heavy morning rainfall caused flooding on Sunday on Mahé, Praslin and La Digue, the three main islands of the Indian Ocean nation.

The Seychelles Met Office announced a Level 1 Alert and asked residents to remain in doors until the rainfall subsided. The Indian Ocean islands’ disaster and risk management division was mobilized to areas where structural damage was caused by the water flow.

Districts on Mahé were the most affected, where in the western area of Grand Anse roads were submerged as well as the road to Port Launay, near the Constance Ephelia Resort & Spa. The road to to Mount Simpson in the northern district of Bel Ombre was also damaged by water from a river which overflowed onto the road.

“ It took place at around 7am, so there were not a lot of people leaving their homes on a Sunday morning… we don’t want to imagine what could have happened if more people were using the road at that time,” said Galen Bresson, member of the Seychelles National Assembly for the Bel Ombre constituency.

Residents in the area set up sand bags to prevent water flowing into their homes, while others could do nothing as they saw their homes filled with water.

Mahe island’s most popular district area Beau Vallon also saw several hours of flooding around the construction site of the Savoy Resort & Spa, which is expected to be completed in the coming months.

Hotels on the island remained open for business and were not adversely affected by the downpour.

Rainfall has subsided and the water in the affected areas lowered by the afternoon.

February is the last month of the Seychelles rainy season.