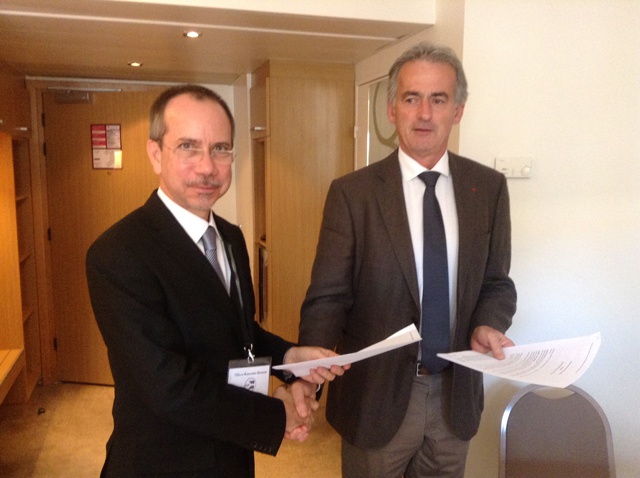 (Seychelles News Agency) - Air Seychelles on Saturday signed a memorandum of understanding (MoU) with Air France, bringing the national carrier of the Indian Ocean archipelago another step closer to realising its goal of commencing non-stop thrice-weekly flights to Paris by the first of July this year.

The Seychelles Minister of Foreign Affairs and Transport, Joël Morgan, announced a little over a month ago that Air Seychelles would soon be flying non-stop to Paris with the “close collaboration of Air France.”

According to a press statement issued by the ministry on Sunday, the agreement was signed over the weekend at a meeting in Aix en Provence in France between Minister Morgan, who is also the Chairman of the Air Seychelles board and the Chairman and Chief Executive Officer of Air France, Frédéric Gagey.

The MoU is expected to usher in codeshare opportunities between Air France and Air Seychelles on each other’s respective air networks, allow frequent flyers of both airlines to earn reciprocal points, as well as technical and cargo cooperation, subject to regulatory approvals from both countries’ respective civil aviation authorities.

After a two-and-a-half year hiatus, Air Seychelles re-launched services to Paris at the beginning of July last year, this time with a stopover in Abu Dhabi.

The airline had initially halted its non-stop Paris flights in 2011, citing major losses on the twice-weekly route.

The UAE's Etihad Airways invested $45 million in Air Seychelles – which was previously wholly-owned by the Seychelles government since its establishment in 1978 – when it bought a 40 percent share in the airline in 2012 with the aim of turning the company around after several years of significant losses.

However, the lack of non-stop flights was a major inconvenience for people travelling between Paris and the Seychelles, with visitors from France, traditionally the Seychelles’ top tourism source falling in 2014.

French tour operators highlighted the issue as one of their main challenges of marketing Seychelles as a tourist destination to their clients during a meeting with Seychelles tourism authorities in France last year.

France that has long been the Seychelles main tourism market is back in number one spot this year after being taken over by Germany in 2014.

According to the latest tourism figures from the Seychelles National Bureau of Statistics, 10,489 French tourists have visited the Seychelles since the beginning of the year, compared with 10,055 from the same period in 2014 – an overall increase of 4 percent.

According to the statement, Minister Morgan said the MoU was the result of a bilateral meeting between Seychelles President James Michel and his French counterpart, Francois Hollande, held in Paris last December where it was decided that direct links between France and Seychelles were a necessity.

“The renewed partnership with Air France is a significant milestone for Air Seychelles and forms a key part of our strategy to build upon tourism arrivals from France and the wider Europe region. It is something that we have worked very hard to achieve,” said Minister Morgan.

The Chief Executive Officer of Air Seychelles, Manoj Papa, said the Air France agreement represented a “shared commitment to build the passenger and cargo market between Seychelles and France.”

“We are pleased to develop our relationship with Air Seychelles, which will provide guests with enhanced access between France and the Seychelles archipelago,” said Air France CEO Gagey.

“Through this MoU, we can explore joint opportunities that will give business and leisure travellers an unmatched offering and add to our bottom lines.”

In a press statement released on Monday morning, the Seychelles Hospitality and Tourism Association (SHTA) chairman Freddy Karkaria has welcomed the signing of the agreement, saying he was "happy that government has responded to the request of the tourism trade, a call which we have been repeatedly making right from the time Air Seychelles pulled out from the European routes."

The statement however said that Air Seychelles' announcement on the MoU agreement covered "broad lines", adding that there were no indications as yet on "what specific commercial and competitive benefits Air Seychelles has managed to negotiate and obtain from Air France" in and out of Paris.

"...we of course fervently hope that these would include giving Air Seychelles firm access to very competitive pro-rates on Air France services from and to major French population centres, as well as from and to major cities in many of our key provider markets like UK, Germany, and Italy," read Karkaria's statement.

"These are crucial to be able to win back the interest, confidence and trust of all the tour operators who have had to build relationships with other competing airlines like Emirates and Etihad also known for their quality service. Air Seychelles must be able to offer competitive fares and a high level of service both on the ground and in the air."