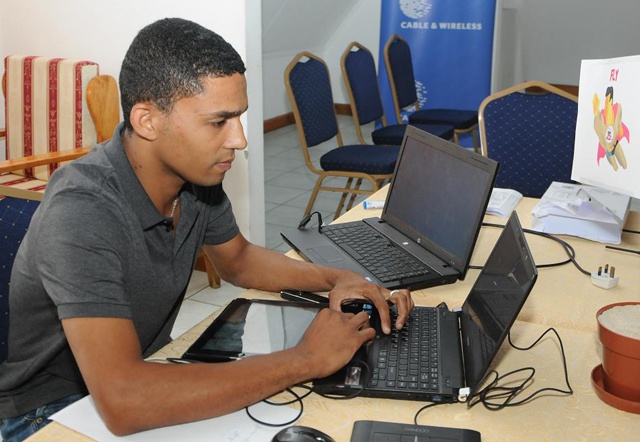 A participant of the 2014 Webcup competition held in Seychelles designed for anyone with an interest in ICT. The global information technology report published by the World Economic Forum has ranked Seychelles 74th out of 143 countries assessed this year. (Patrick Joubert, Seychelles News Agency)

(Seychelles News Agency) - Seychelles has maintained its ranking as the 2nd best in Africa in the Networked Readiness Index (NRI) 2015 compiled by the World Economic Forum but has dropped from position 66 out of 148 countries in 2014 to 74 out of 143 countries assessed this year.

The classification is based on 52 individual indicators categorized under 10 different pillars.

The Indian Ocean island nation with a population of around 90,000 people has improved its score in the readiness subindex for infrastructure and digital content to 61 overall in 2015 from 74 in 2014.

The area where there has been the most improvement under this subindex is affordability, where Seychelles ranks 93 compared to 113 in 2014. Skills have also improved to 42 from 44 in last year’s ranking.

However, the Seychelles’ score in three other main subindices of environment, usage and impact have witnessed a drop this year from a score of 62, 64 and 77 in 2014 to 79, 70 and 85 respectively.

The neighbouring Indian Ocean island of Mauritius, with a population of around 1.2 million, has not only maintained its ranking as the best in Africa but has also climbed up three places to 45 position from 48 in 2013.

In the African region, Nigeria dropped seven places to 119th, South Africa ranks 75th and is now third in the region behind Mauritius and Seychelles while Kenya which according to the NRI has been slowly improving since 2012 is up by six places this year to the 86th position.

In the global WEF rankings, Singapore which ranked second in 2014 has this year taken the top spot, switching places with last year’s leading ICT country Finland.

While it has indicated that more time is needed for more in-depth analysis before commenting specifically on the newly released report the archipelago’s Department of Information and Communication Technology (DICT) has acknowledged that ICT infrastructure development is the sector’s “strong point.”

“This is characterised by the implementations of larger and better networks by all stakeholders (private and Government). As examples, last year saw the introduction of 4G systems and some operators have expanded their deployment of FTTH (Fiber to the home) solutions... We have also seen a steady increase in the services available online (both from private & Government sectors), which is a positive development that needs to accelerate even faster and the population and businesses need to be sensitized to utilize them," the department Principal Secretary Benjamin Choppy told SNA in an email interview this afternoon.

With regards to key challenges faced by the sector, such as affordability of services, the availability of properly trained, skilled human resources and the implementation of capital-intensive ICT solutions, are on top of the list.

According to a report published by the International Telecommunications Union in 2013, the island nation has 100 percent mobile phone penetration, 47 percent of the population uses the Internet, and there is 12% fixed (wired)-broadband penetration.