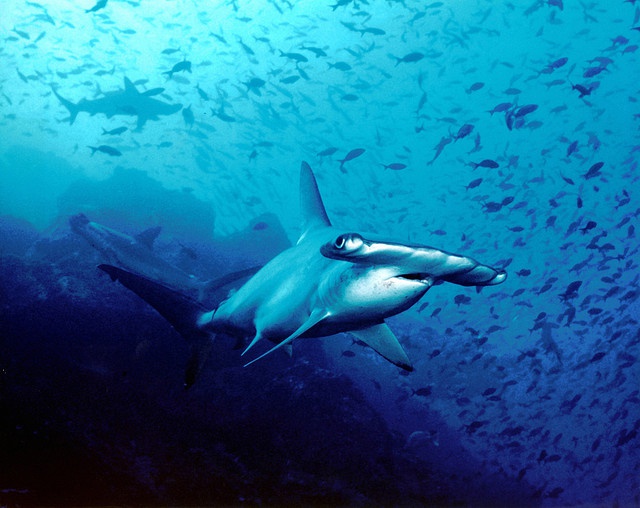 With its thriving marine environment, shivers of scalloped hammerheads are easily reeled in by fishermen in coastal waters of the Indian Ocean islands of Seychelles, although they are also often captured as by-catch by various commercial fishing vessels, such as long-liners and purse seiners. The study will provide a detailed assessment of the population of the species in the waters of the archipelago. (Barry Peters/Flickr) Photo License: (CC BY 2.0)

(Seychelles News Agency) - Environmental experts say Seychelles will have to carefully assess the impact of the harvest and sale of shark products as it begins a detailed assessment of the newly-protected hammerhead shark within its waters in order to adhere to an international convention to which it is a signatory.

At a recent conference of the Convention on International Trade in Endangered Species (CITES), in Bangkok, Thailand, three new species of hammerhead sharks (scalloped, smooth and great) were added to the list of protected species.

The CITES agreement, which already covers more than 5,000 species of animals and 29,000 species of plants, dictates that member countries should regulate the exportation of products of these species with CITES permits to ensure that they are not over-exploited.

This move was further heightened by the classification of one of the species,the scalloped hammerhead as endangered by the International Union for Conservation of Nature, IUCN, with recommendations from the Shark Specialist Group, a watchdog for the world’s sharks, rays and chimaeras.

Sharks play a critical role in maintaining a balanced food chain in marine ecosystems, but scientists say that sharks have become one of the most exploited species on the planet, with an estimated 100 million sharks killed every year to supply growing demand for shark fins, meat and gills.

The seemingly insatiable demand for shark has resulted in a 97 percent drop in shark populations over the last two centuries.

Distinct with its ‘hammer’ for a head, the scalloped hammerhead, which is fairly large, is highly prized in Asian countries, mainly for its fins, and over-exploitation has led to severe depletion in its global population.

In the Indian Ocean archipelago of Seychelles, the tradition of shark fishing has been practised for centuries by the population although compared to most countries, when caught, the entire shark is used.

Shark meat is considered as the cheapest in the local market, selling in pieces of around two dollars each and is usually either served with rice as a Creole dish called ‘satini reken’ (shark chutney) or as a curry with coconut milk by the local population of 90,000. Other parts, such as the jaw are left to dry and used as ornamentation in houses.

With its thriving marine environment, shivers of scalloped hammerheads are easily reeled in by fishermen in coastal waters of the Indian Ocean islands of Seychelles, although they are also often captured as by-catch by various commercial fishing vessels, such as long-liners and purse seiners.

Seychelles, a signatory of the CITES convention, also exports a small amount of shark products and in order to adhere to the Convention, a study was recently launched to investigate the status of the scalloped hammerhead.

The scalloped hammerhead is the second shark species to be put under the microscope by the Indian Ocean Island following the declaration of whale sharks (Rhincodontypus), the largest shark in the world as a protected species.

The vast tropical waters of the Seychelles once teemed with great white, hammerhead and tiger sharks, but overfishing has decimated shark stocks in recent years, particularly around the inner islands.

Depending on the species, sharks are caught throughout the year although the scalloped hammerhead, also known as ‘Marto rouz’ in the native Creole language, is one of the most common out of three species of hammerhead shark, part of the family Sphyrnidae, that can be found around the archipelago.

To combat overfishing, the Seychelles has introduced a National Plan of Action for Conservation and Management of Sharks aimed to ensure that the sharks are harvested sustainably by both commercial and artisanal fishers, but many local fishermen are cautious about the implications of tightened regulations for the species.

“For artisanal shark fishermen [in Seychelles], that is fishermen who actively target shark with specialised modified anchored long lines known locally as ‘drag’, this species is the single most important component of their catch due to its size and relative abundance,” read a statement from the Artisanal Shark Fishers Association, ASFA.

The association, comprised of fishermen using a wide variety of fishing practices, has been working with researchers to collect data on the scalloped hammerhead since late last year, in a project that is expected to span three years, targeting the plateau around the most populated island of Mahe.

The project entails the collection of data and samples from scalloped hammerhead throughout the year, especially during the breeding season.

The collection of data is expected to include different types of fishing practises, from seasonal shark fishing, traditional year-round hand-line fishing and the bycatch of juveniles among mackerel fishermen in order to assess the population.

“Tissue samples will be taken from adult specimens to allow for DNA analysis of the population,” said ASFA, adding that “effective population size is an indicator as to the number of breeding females in the population which, when coupled with the size and sex ratio of catch data and the known life history characteristics of the species.”

According to ASFA, this accurate and precise compilation of data is important to the artisanal shark fishers given the socioeconomic importance of the harvest of this species.

Freezing exports may be a ‘default position’

The project has received funding from the Mangroves for the Future, MFF, an international organisation that provides grants of up to 25 thousand US dollars in different projects relating to effective coastal management.

On its website, MFF says the data collected through the project will be used as a basis for assessing the sustainability of the species and to the effective regulation of shark fishing which has been practised for many centuries by the islanders of Seychelles.

With little available data on scalloped hammerheads, MFF states that “the likely default position [of Seychelles] would be the precautionary principle, and not issue any permits [for exportation] until such time as sufficient information is available to meet the CITES decision-making criteria.”

Such a decision, according to MFF could “seriously undermine the livelihoods of artisanal shark fishers in Seychelles for an undetermined period of time until the required information is collected.”

Survey is 'only the beginning'

However, the Director General of the Wildlife Trade and Conservation Section at the Environment Ministry, Ronley Fanchette, told SNA that Seychelles' export of shark products is very minimal, limited mostly to shark fins.

According to the latest fisheries statistical report compiled by the Seychelles Fishing Authority, SFA, the export value of shark fins varied between 2009 to 2013 with the highest being 2012 where some $188 thousand worth of fins were exported while in 2013 only around $41 thousand worth of the product was exported .

"There are only two local exporters of such products and export is based on availability," he said in an email interview with SNA on Monday. "Apart from fins, other products derived from sharks are destined for the local market and this is not regulated under the Conventions."

According to Fanchette, sharks are not being targeted on a commercial basis; mostly they are only harvested as by-catch from purse seiners and traditional methods for the local market.

"This survey is just the beginning," he said. "The decision to place a ban will depend on many factors, especially if there are global concerns that these species are on the decline with no hope of recovery as a result of increased global pressure... Seychelles as a signatory state to these Conventions will have to abide to whatever decision is taken at the global level targeting the global conservation of these species."

Fanchette says that even the baseline survey will not be 'enough' to get a complete picture of sharks and their numbers in the Seychelles for long-term conservation efforts.

"It will only give an indication on levels of harvest but not on stock dynamics... sharks are migratory, meaning they do not spend their entire life within our jurisdiction. The survey report could come up with recommendations and if we are strongly advised on the need to ensure [the sharks'] sustainability, then with other relevant authorities such as the SFA, government will have to take a decision," he said.

"If... demands continue to rise and results in significant decrease in global shark populations, then member states can express such concerns during COP meetings and could vote for a ban on harvest of these listed species of sharks," he added.

Fanchette says Seychelles' obligation is simply to ensure that trade in these species are not detrimental to their long-term conservation at the national level.

"One option is a survey to assess populations/stock size and distribution, assess the trends - whether they are declining, stable or decreasing - implement a long-term monitoring programme and establish a quota system."