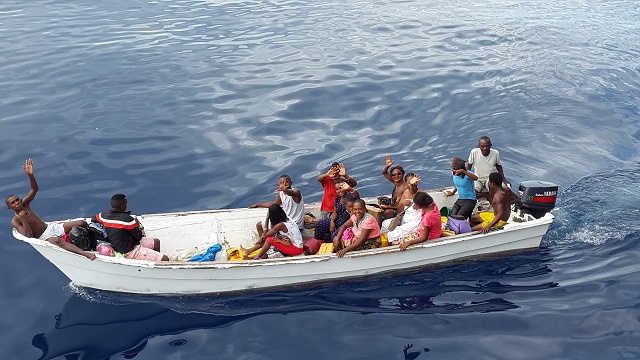 (Seychelles News Agency) - “A happy ending to what could have been a long journey lost at sea.”

This is how the crew of the smallest of Seychelles’ fleet of tankers, 'Seychelles Paradise', felt after helping to rescue a stricken boat with 15 Madagascans onboard while on a recent offshore bunkering trip.

In an account provided to SNA by the Seychelles Petroleum Company (SEYPEC) which manages the Seychelles fleet of tankers, the crew said the rescue operation occurred some 35 nautical miles off Nosy Be, an island that lies northwest of Madagascar, on April 1, 2015.

“At approximately 0300 hrs, a duty watchman reported sighting of a white light on the port side of the vessel. The Master and security personnel on duty investigated and noticed a white light flashing 6 points to port, about 5 cables distance and approaching. Immediately Seychelles Paradise switched on the searchlight in order to further investigate,” reads the account.

The investigation led them to the discovery of a white-hulled boat measuring some 15 feet with one outboard engine. The boat was apparently traveling from Nosy Mitsio off Madagascar’s North West coast to Nosy Be.

“Deck watch personnel reported hearing “Au secours!” (Help!) being called out from the boat. Approaching closer they discovered 15 people including two small boys on board the small boat…”

The Seychelles Paradise crew learned that the boat’s occupants had been at sea since 2 pm the previous day and had lost their way during bad weather and were having engine problems.

Seychellois Captain Adrian Mondon, onboard the Indian Ocean island tanker, recalls that the weather at the time included passing showers with thunderstorms and lightning.

In the hours that followed, the Seychellois crew managed to throw a heaving line to the stricken boat, pulling it alongside the Seychelles paradise while they made contact and requested the assistance of the authorities in Madagascar, through the Joint Rescue Coordination Centre in the capital of Antananarivo.

SEYPEC as well as the archipelago's Maritime Safety Administration, were also informed of the incident.

“We provided the occupants of the stricken boat with raincoats, dry bed sheets and warm blankets followed by hot beverages and biscuits. The chief cook was called up to prepare some hot meals for them,” said Captain Mondon.

It was around 10 am that word was received that family members ashore had sent two boats to escort the distressed vessel to Nosy Be.

By that time, the onboard oiler of the Seychelles tanker had also managed to fix the damaged outboard engine allowing the stricken boat and its passengers to start making way to their originally planned destination.

According to Captain Mondon, by then it was sunny, the sea was calm, and all of the 15 people were in good health.

"They expressed their appreciation for the help they received and left in good spirits," added Mondon.

This is not the first time the Seychelles Paradise, also referred to as the green tanker, has been involved in an operation while at sea in Madagascar.

In April last year it averted an oil spill off the coast of Madagascar when it undertook the delicate operation to salvage 2,655 tons of diesel from a Norwegian tanker, the 'MT Tromso', which ran aground on the reefs just off the coast of Diego Suarez.

Other operations that the Seychelles Paradise has performed outside Seychelles include the supply of fuel to an oil rig within port limits of Mauritius in December 2013.

The vessel also assisted Comoros with a fuel cargo in 2013, at a time when their supplies were short.