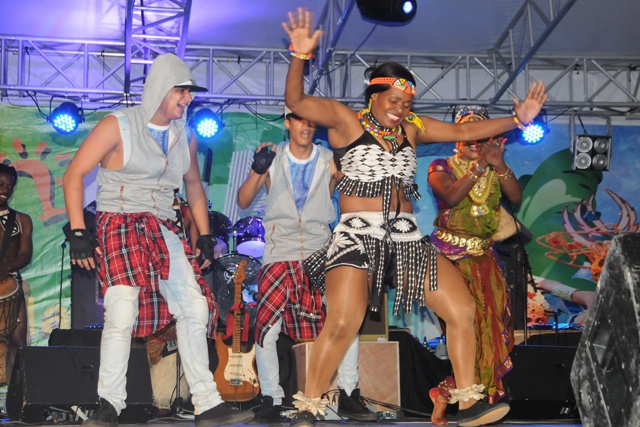 A festive ambiance at 'Stad Popiler' in the Seychelles capital of Victoria on Friday evening with live performances and a foretaste of what the international delegation from different corners of the world will showcase in the parade on Saturday afternoon.(Patrick Joubert, Seychelles News Agency)

(Seychelles News Agency) - The sun is up in Seychelles and the island nation's capital of Victoria is buzzing as it prepares to see the unfolding of an array of colours showcasing the melting pot of cultures displayed during the annual ‘Carnaval International de Victoria’.

Some sixty floats are expected to parade the streets of Victoria this Saturday afternoon, for the fifth edition of the carnival.

The festive ambiance of the 2015 carnival in Seychelles kicked off yesterday evening with the opening ceremony at “Stad Popiler” a stadium in the centre of the Seychelles capital.

The Seychelles President James Michel, the Ghanaian king of the Ashanti people or Asantehene, Otumfuo Osei Tutu II who is the guest of honour at this year’s carnival and Swaziland’s Principal Princess Sikhanyiso Dlamini, were among dignitaries attending the open air event in the cool breeze of the evening.

During the ceremony, which was broadcast live on national television, the Seychelles Broadcasting Corporation (SBC), the Ashanti King addressed the crowd, where he noted that the carnival spirit should not only offer two days of fun but should arouse all the talents found in the youth.

The Asantehene said he had chosen the right moment to accept the Seychelles Ministry of Tourism and Culture’s invitation to make a symbolic visit to the island nation, the country of his royal family’s exile almost 120 years ago.

“We have chosen not as some would have wished to come and mourn and burden ourselves of the pain and anguish of the past. We have chosen instead to join you in celebrating the joy of freedom,” he said.

The first Carnaval International de Victoria was held 5 years ago in 2011, the result of what the Seychelles Minister for Tourism and Culture Alain St Ange said was a dream to create a cultural event that would invite the world to join together in the spirit of dialogue and peace and total harmony irrespective of religious, political and racial differences.

"Today I say look at what we can do when we work as one. Look at the carnival a small country like Seychelles can stage for the world as large," said St Ange.

Some 29 international delegations have turned up this year while around a hundred media houses from all over the world are covering the event while also exploring the country as a travel destination.

The Chief Executive of the Seychelles Tourism Board, STB, Sherin Naiken expressed pride to see “a steady growing list” of international delegations and press as well as local participants that have joined the carnival each year since 2011.

Naiken added that the carnival carries important messages of togetherness as well as the way it points to the blend of tourism and culture which she said is gaining popularity.

“To ensure the continued success of our tourism industry upon which we all depend for our future, we Seychellois need to embrace the ideal of cultural tourism.”

The opening ceremony, a blend of colours and lighting also saw live performances until late last night by local artists as well as a foretaste of what the international delegation from different corners of the world will showcase in the parade on Saturday afternoon, the main day of the carnival.