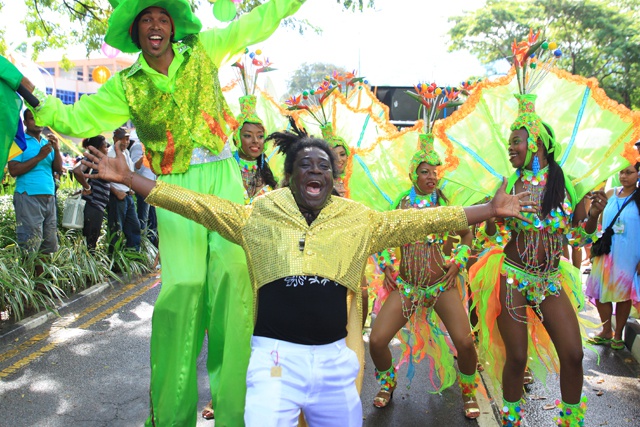 (Seychelles News Agency) - Seychellois bystanders and visitors to the 115-island archipelago lined the streets of the Seychelles capital of Victoria to watch the grand parade on Saturday April 25, the main day of the fifth ‘Carnaval International de Victoria’.

Featured in the parade were extravagant costumes, traditional games dances and songs, features depicting the cultures, environment and traditions of several countries from the African, European, American and Asian continents as well as the islands of the Indian Ocean.

Nerves reached fever pitch by 2 pm, when heavy showers threatened to dampen the festivities, but the inclement weather eventually gave way to the islands' famous tropical sunshine, with the temperature ranging between 28 to 29 degrees Celsius.

A total of sixty-two groups were at the starting line on Bois de Rose Avenue, comprised of 42 local and 20 international floats.

International dignitaries, including the Ghanaian king of the Ashanti people or Asantehene, Otumfuo Osei Tutu II who is the guest of honour at this year’s carnival and Swaziland’s Principal Princess Sikhanyiso Dlamini, also watched the parade as it unfolded.

Since 2011, the carnival has been an annual event that a large majority of Seychellois keep on their calendar.

"I have come with my whole family…but I cannot see all the floats because there is a lot of people," Jacqueline told SNA.

"The carnival is well animated…it’s even more interesting than the previous carnivals and there are many participants…I can also see a lot more people in town than in previous years," said Sandra, who was watching the parade with her whole family.

Among the Seychellois thronging the streets, there were also several visitors spending their holiday in Seychelles who had taken the opportunity to see what the carnival has to offer.

"We have not come here especially for the Carnival but we were happy to find out that it is being held during our holiday here…we had to wait quite a bit to see the floats and for us who are not used to the heat, despite the rain this morning, the waiting was a bit difficult,” Sandra, a French tourists who is on holiday in Seychelles with her family, told SNA.

"I’m on holiday and I did not know about the carnival and I am happy to be part of it. I was a bit afraid because of the rain this morning but eventually it stopped…I find this very lively and very nice,” another tourist told SNA.

The 2015 Carnival will come to an end tomorrow with the Kiddies Carnival at Freedom Square, where children from participating local schools will parade, dressed up in costumes made from mostly recycled materials.

As the carnival ends prizes will also be presented to the best local and international floats.