A flying whale shark of a time: parade winners rejoice as Seychelles carnival is closed 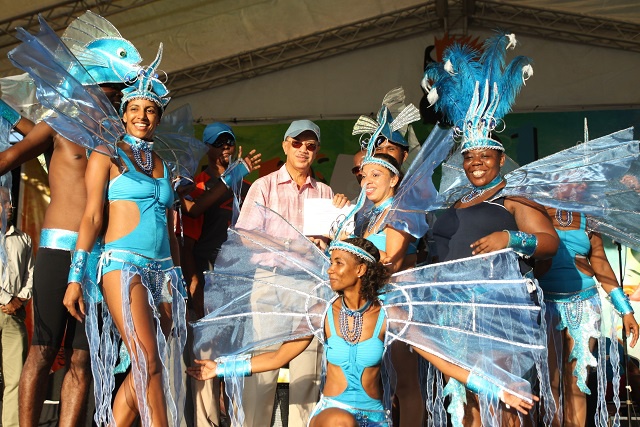 (Seychelles News Agency) - After weeks of preparation, four out of the sixty-two groups participating in the 2015 edition of the Carnaval International de Victoria were rewarded with gold trophies on Sunday, including the legendary Notting Hill Carnival Roadshow of the United Kingdom which took home the coveted prize for ‘Best International Float’.

It’s not hard to see why either: with their fabulously colourful giant masks, huge floating butterfly wings and spider’s webs, as well as elaborate Egyptian statues and costumes, Notting Hill’s famously creative pageantry was not to be outdone. Brazil and Mauritius were awarded second and third place in the international category.
For three consecutive years, since the first carnival began in Seychelles in 2011, Notting Hill has won the best international float title. They were unseated from their position to second place last year when China took first place, and it seems the Brits were determined to take back what was once theirs.

The prize for ‘Best Local Float’ went to the Seychelles Civil Aviation Authority, the organisation which manages the archipelago’s airports, for having an amazingly inventive model of a whale shark leaping out of the sea and turning into an Airbus under the theme ‘when the ocean meets the sky’, accompanied by energetic dancers clad in blue and black.

The ‘Best Cultural Float’ award went to the group from La Digue, the third most populated island in the 115-island group of 90,000 people, for their innovative float resembling a yacht, representing the seafaring side of Seychellois culture. Cambodia and Zambia won second and third prize respectively in the international category.

The Seychelles Institute of Teacher Education won the category for ‘Best Educational Institution’.

The President of Seychelles, James Michel, handed out the prizes to the winners and thanked the people of Seychelles for coming out in their numbers once again to participate in the carnival.
Rumours firmly quashed
Addressing the crowd at the closing ceremony on Sunday evening, Seychelles Minister for Tourism and Culture Alain St. Ange put rumours of a supposed political attack in the island nation to rest.

The carnival parade began almost an hour late on Saturday, and when it did start just before four in the afternoon, whispers of an attempted attack to "destabilise the country" spread and gained momentum via telephone and social media when the public observed that the front row seats in the VIP stand, usually reserved for the most important dignitaries, including President Michel and his guests of honour, were empty.

This year, Seychelles was hosting the Ghanain King of the Ashanti people and the King of Swaziland's eldest daughter as well as a number of other high-ranking dignitaries from various countries around the world and security was exceptionally tight.

St. Ange explained that the carnival had started late because of the seating requests of the large Ghanain delegation.

"We could not accommodate 200 people at the VIP stand so it was important for us to move some of the VIPs to another area… this meant that we had to alter the carnival route because its important when we have guests that we treat them right,"he said.

The Ghanaian king and his delegation was instead placed on the front steps of the International Convention Centre of Seychelles (ICCS) together with President Michel and a number of other dignitaries.

"The CEO of STB [Seychelles Tourism Board, Sherin Naiken] and her team have worked hard to stage the carnival for Seychelles and all Seychelles, and then for the region, for Africa and for the whole world, because the carnival was a dream to have a platform for the world to live in peace, to show how this connectivity among the people creates this ambiance for people to stop fighting and live in peace," added St. Ange.
Hats in bloom triumph at Kiddies Carnival

Earlier on Sunday, the second edition of the Kiddies Carnival took place as the perfect way to end the weekend celebrations with the entire family at the fifth annual Carnaval International de Victoria.

Blessed with sunny skies, the nine participating schools commenced their parade from the ‘Paradis des Enfants’ playground and made their way to Freedom Square. As with the previous year, organisers asked the schools to use only recycled materials to create their costumes and floats.

Some floats represented different aspects of the environment of the Seychelles, while others featured clowns and children from different cultures around the world.

The prize giving ceremony for the kiddies carnival started soon after the parade ended. There were seven categories of prizes given out to the best schools, with not only trophies but also cash prizes on offer.

This year, it was Anse Aux Pins Primary, a school from the east coast of the main island of Mahe, who also happened to be last year’s second prize and best carnival spirit winners, took home the prize for best overall presentation and a cheque for around $550.

Each winning school received a trophy and t-shirts as a token of appreciation.

Sir Andrew, the arts teacher from the Anse Aux Pins School, told SNA that the children took a week out of their school holidays and worked very hard to create the costumes. Since their theme was ‘hats in bloom’ the children sported green hats adorned with vibrant and eye catching flowers.

"We thank all schools that have participated because it is bringing about a new culture... if we say we are a country that is clean, that recycles things we need to start with the small children to adopt this culture and this is important for the schools participating," said Minister for Tourism and Culture, Alain St. Ange, speaking before the presentation of the prizes.

He also thanked the CEO of the Seychelles Tourism Board (STB), Sherin Naiken, for coming up with the idea to hold the carnival for children last year.

“Even though this is only the second kiddies carnival it already seems like we have been doing it for years now. It has now become a tradition.” a spectator called Joseline told SNA.

“I was not aware that the costumes were made from recycled materials, but now that I know, I am even more impressed,” said one of the spectators.
According to the national television station, the Seychelles Broadcasting Corporation, the STB has not yet set a firm date for the next carnival, but said it should take place around the end of April 2016.
Arts & Culture » Be a reporter: Write and send your article » Subscribe for news alert
Tags: Carnaval International de Victoria, Notting Hill, Seychelles Civil Aviation Authority, James Michel, Ashanti, Swaziland, security, Kiddies Carnival, Sherin Naiken, Alain St. Ange