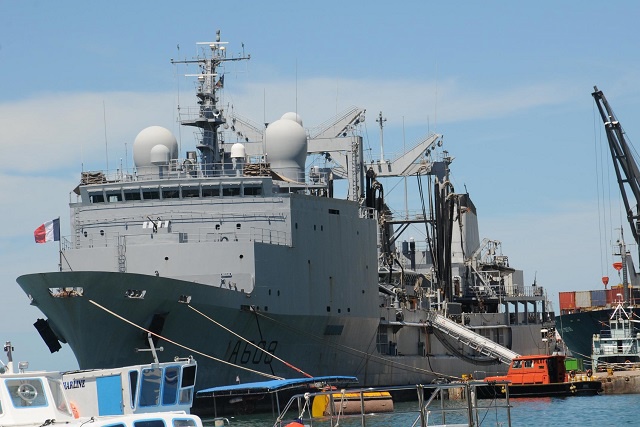 (Seychelles News Agency) - Although there has not been a sucessful pirate attack recorded in the Indian Ocean in the last two years, the need for vigilance and international collaboration is more pressing than ever.

This was emphasized by the commander of the Combined Task Force (CTF-150), which is a multinational task force responsible for ensuring maritime security and countering terrorism, Captain René-Jean Crignola of the supply ship 'Var', which has been stationed in Port Victoria since April 27.

The Bahrain-based CTF-150, presently grouping 18 nations, was established in 2002 to monitor, inspect, board, and stop suspicious ships as part of the US-led 'war on terror' in the Horn of Africa region, including operations in the North Arabian Sea to support operations in the Indian Ocean.

The CTF-150's main objective is to ensure the security of the zone, which registers 23,000 ship movements annually and a third of the world's oil exports.

Since April 7, the CTF-150 has been placed under the command of 53-year old Captain Crignola, who is well acquainted with the region, having served in the French navy for several years in the Indian Ocean.

The forces are presently involved in gathering precise information on shipping movements in the zone and countering illegal activities linked to financing terrorist organisations, such as drug and arms trafficking.

At a press conference aboard the 'Var' on Tuesday afternoon, Crignola said nations may take part in any operation on a purely voluntary basis.

"No country is compelled to take part in any operation running counter to its national interests," he said, adding that generally there is good understanding and collaboration between participating nations, notably in requests for the exchange of information.

Crignola said that since the 9/11 attacks on the World Trade Centre in New York, terrorism had evolved. "Though it appears to have declined in certain parts of the world, it has flourished elsewhere."

He pointed to Somalia as an example, where though piracy is generally on the decline, the country's commercial trade in charcoal appears to be a major source of funding for the Al Shabab terror group.

"Besides funding terrorism, this activity is also depleting Somalia of the few forest areas it has left," said Crignola.

Crignola also praised Port Victoria as being the safest port in the zone.

"After 15 to 20 days at sea, it is very pleasant for our men to walk around Mahe, which is a beautiful island," he said.

He however cautioned against complacency. "Terrorists can strike when least expected. They can lay mines and even use small dinghies filled with explosives to destroy ships."

He noted that this happened several years ago in the Yemeni port of Aden, where the American warship USS Cole was severely damaged and 20 sailors killed in a suicide attack by terrorists.

Joint exercises between the Seychelles Coastguards and the French Navy are planned before the ship leaves on May 4.

Presently three naval ships are integrated to the CTF-150. Besides the Var, which is the fleet's flagship vessel, there is the HMS Richmond of the Vritish Royal Navy and HMAS Newcastle from Australia.

The Bab-el-Mandeb strait acts as a strategic passageway between the Indian Ocean and the Mediterranean Sea via the Red Sea and the Suez Canal. In 2006, an estimated 3.3 million barrels (520,000 m3) of oil passed through the strait per day, out of a world total of about 43 million barrels per day (6,800,000 m3/d) moved by tankers.

Similarly, the Strait of Hormuz is the only sea passage from the Persian Gulf to the open ocean and it is one of the world's most strategically important choke points, as around 20 percent of the world's petroleum passes through the strait.

The CTF-150 is one of three task forces of the coalition of the Combined Maritime Forces (CMF), the others being CTF-151, which is responsible for countering piracy at sea and CTF-152 , which ensures security and cooperation in the Persian Gulf.