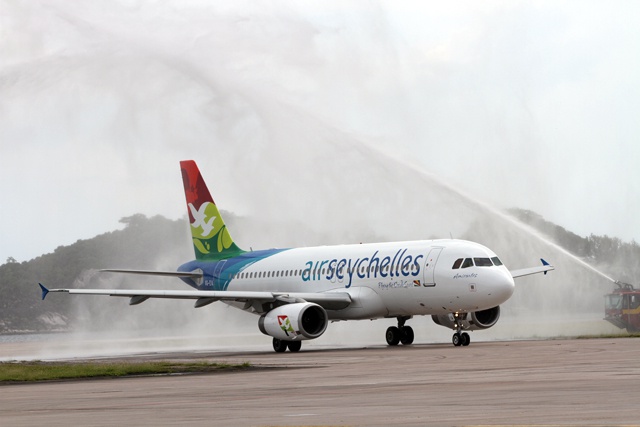 File photo: Air Seychelles welcomed its third large aircraft, an Airbus A320, on arrival in November 2014. The airline confirmed to SNA that it has already received a similar aircraft on lease from Etihad in April. (Mervyn Marie, Seychelles News Agency)

(Seychelles News Agency) - As of this week, Air Seychelles, the national carrier of the 115-island Indian Ocean archipelago has increased its flight frequency to Mumbai, Mauritius and Antananarivo.

To support the logistics of deepening their regional network, Air Seychelles has confirmed to SNA that it has already obtained an additional Airbus A320 aircraft on lease.

“To maximize aircraft utilization and efficiency, Air Seychelles has leased a two-cabin Airbus A320 aircraft from Etihad Airways, with 16 seats in Business Class and 120 seats in Economy Class," An Air Seychelles spokesperson said in an email statement on Thursday morning.

“The aircraft joined the fleet on 15 April and is currently being operated on regional services to Antananarivo, Dar es Salaam, Mauritius and Mumbai, and select services to Abu Dhabi.”

Air Seychelles invited local media to cover the welcome of its third large aircraft, an Airbus A-320, in November 2014, which was greeted with a traditional water cannon salute.

On Tuesday, Air Seychelles increased its flights to Mumbai to four per week, with flights leaving the Chatrapati Shivaji International Airport every Wednesday, Thursday, Saturday and Sunday.

Air Seychelles also added an extra flight on its Mauritius route effective Tuesday to bring the total number of flights up to four per week.

As of July 3, flights to Antananarivo, Madagascar, will be notched up to three per week, with flights every Wednesday, Friday and Sunday.

According to a press statement issued by Air Seychelles in March, the increased number of regional flights was designed to serve the recently-announced non-stop Air Seychelles service to Paris, which will commence at the beginning of July.

“In order to deliver further benefits to travellers, the [Paris] service will be coupled with a considerable deepening of our regional network, which is designed to meet the demand for travel between East Africa, the Indian Subcontinent and the Middle East, connecting across our Seychelles hub," said the Chief Executive Officer of Air Seychelles, Manoj Papa. "We are continuing to build flexibility and convenience into our regional network for business and leisure travellers."

According to Air Seychelles, the regional network development strategy will see the airline bringing an additional 21,000 regional return seats to Seychelles per year.

Air Seychelles, which was established in 1977 and adopted its present name in September 1978, was until 2012 wholly owned by the Seychelles government. UAE's Etihad Airways invested $45 million in Air Seychelles when it bought a 40 percent share in the airline in 2012 with the aim of turning the company around after several prior years of losses.

In 2015, Air Seychelles announced a third consecutive year of profitability for the year ending 2014, however an International Monetary Fund (IMF) end-of-mission press conference held at the end of March revealed that the airline was still making an operating loss.

According to the Principal Secretary of Finance, Patrick Payet, in 2014, Air Seychelles was allocated a total of $8.5 million from the national supplementary budget to finance the purchase of Twin Otter aircraft for the airline’s domestic inter-island routes.

From the 2015 budget approved by the National Assembly late last year, Payet told SNA in a telephonic interview in March that the national carrier was given a capital injection of $5 million to cover its outstanding liabilities and a further $2 million to cover the marketing costs of its nonstop Paris flights, which are expected to commence in July.

Including its current scheduled twice-weekly flights to Dar es Salaam and thrice-weekly services to Johannesburg, Air Seychelles' regional network enhancement will now offer 16 return services per week in the Indian Ocean region, up from 13 previously.

Air Seychelles and its strategic partner Etihad Airways, which has owned 40 percent equity in the archipelago's national carrier since 2012, will offer a double daily service between Seychelles and Abu Dhabi, up from its current 13 flights per week.

However, due to the logistical challenges faced by the new non-stop flights to Paris, Air Seychelles will modify its thrice-weekly service between Seychelles and Hong into a daily codeshare service operated by Etihad Airways.

The service will be operated on an Airbus A330-200 with Air Seychelles livery three times a week, and will feature an Air Seychelles "ambassador" in both Business and Economy Class cabins.

According to Air Seychelles' statement, Papa said that Air Seychelles would continue to develop the very important Chinese market, based on the success of the flights between Beijing and Seychelles in February.

“The Chinese market has enormous potential for the airline. It also has the potential to be a key economic stimulus for the economy of Seychelles, as the two recent flights with more than 500 Chinese tourists testified.

“We are generating interest in the Chinese market and responding to requests from several large tour operators for charter operations,” Mr Papa said.

Maximising utilization of its international fleet, one Airbus A330-200 in Air Seychelles’ livery will be operated in the interim by Etihad Airways from end April. Air Seychelles will maintain a total of three Airbus aircraft in its fleet.

Papa said the change would enable Air Seychelles to direct resources to developing the Indian subcontinent and East Asia, while still focusing on the key market of Europe.