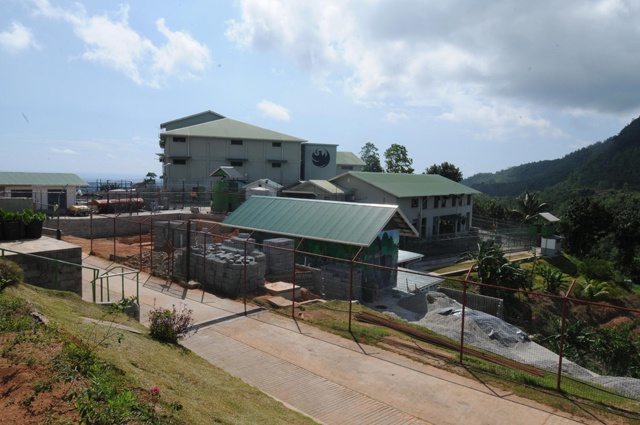 The Montagne Posee prison, situated atop the mountains in the central region of the main Seychelles island of Mahe. Just under 70 Nepalese officers work in the Seychelles Prison Services (Patrick Joubert, Seychelles News Agency)

(Seychelles News Agency) - The Seychelles government is currently in the process of making arrangements for Nepalese security personnel employed in its prison and police forces to return home after last weekend’s catastrophic earthquake.

It was revealed on Wednesday night by local television station SBC (Seychelles Broadcasting Corporation) that a number of the Gurkhas have been directly affected by the disaster, either through loss of a loved one or the destruction of their family’s housing.

An 8.9 magnitude earthquake ripped through the mountainous Himalayan region on Saturday, and rescue teams from all over the world have rushed to help with relief efforts. According to AFP, government officials have put the latest death toll at 5,500 people.

The Seychelles Home Affairs Minister, Charles Bastienne, visited several of the sites over the weekend where Nepalese security officers are working to personally express his sympathy to them following the earthquake, according to a press release issued by the Ministry of Home Affairs on Monday.

Bastienne said that the government would assist contract workers to return home in cases of bereavement, but a number of others also wish to go home to help their family members who have been left destitute and without shelter.

Despite this, the Prison Service has said it cannot allow all those who have requested to return to Nepal at the same time as this could lead to a human resource and security problem at the country's prisons.

On Saturday, a statement issued by Seychelles President James Michel expressed condolences to the people and the government of Nepal, adding that Seychelles was “doubly affected” by the tragedy in Nepal due to the large community of Nepalese security personnel working in the 115-island archipelago of 90,000 people.

Maxime Tirant, the Chief Superintendent of the Prison Services in Seychelles, told SBC that the government authorities sympathise with the Nepalese workers and they are considering allowing the Nepalese employees to return to their country in batches, with first preference given to those whose situation is the most serious.

Race against time to rebuild

Tilak Tasmang, one of the Gurkhas working at the country’s main prison, located atop Montagne Posée, a mountain in the central region of the Seychelles’ main island of Mahé, lost his brother in the disaster.

“My brother’s house fell down on him… I contacted my sister, she lives in Kathmandu, and she informed me, but I still can’t contact my father [or] mother because there is no electricity,” he told SBC.

Other officers face the helplessness of being hundreds of kilometres away while their families have been left homeless due to their homes being destroyed.

Hari Rai, another Prison Services officer, said that his colleagues living in central and western Nepal have been more greatly affected than those who live in the eastern regions.

“A lot of officers’ houses have been destroyed, and their families are compelled to stay under open skies and in tents, so 16 to 17 people’s houses are completely destroyed, so they are hoping that from management and government’s side, if they get a compassionate leave to go and re-manage a temporary shelter,” he said.

Many other officers cannot get in touch with their loved ones because communication by phone and internet is impossible in many areas due to damaged infrastructure and interrupted electricity supplies.

With the rainy monsoon season approaching in June, aid agencies and individuals will need to move quickly to rebuild.

As many as one in four families are now surviving in harsh and difficult conditions, with no access to clean water or shelter.