SIF symposium: unlocking the mysteries of the UNESCO World Heritage Sites of Seychelles 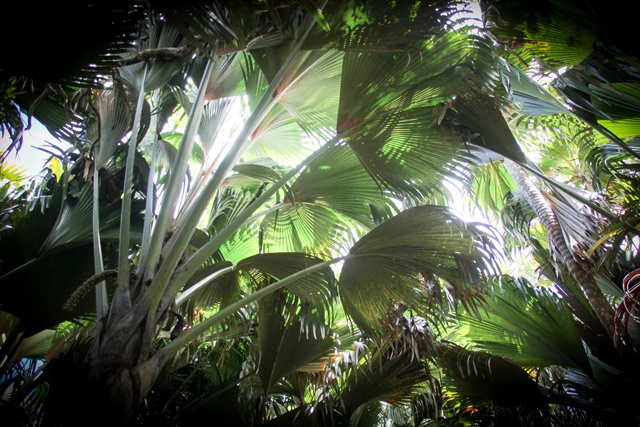 The massive leaves of the coco-de-mer palm loom impressively over the head when visiting the UNESCO World Heritage Site of the Vallee de Mai on the Seychelles' second most populated island of Praslin. (Romano Laurence, Seychelles News Agency)

(Seychelles News Agency) - The pristine forest of the Vallee de Mai, with its sheer abundance of gigantic palms and the arid Aldabra atoll dominated by hardy giant land tortoises on razor-sharp elevated corals are two sites in Seychelles that have been internationally recognised for their astounding natural beauty.

Located on the second most populated island of the Indian Ocean archipelago, the Vallee de Mai was declared a World Heritage site in 1983 by the United Nations Educational, Scientific and Cultural Organization (UNESCO).

With several species on the Red List of the International Union for Conservation of Nature (IUCN), the United Nations body responsible for assessing risk of extinction of different species, it was undeniably a site that needed protection.

Its status gave Seychelles a second World Heritage Site, following that of Aldabra which was received a year earlier.

The atoll located in the westernmost part of the Indian Ocean archipelago, has caught the attention of researchers for many years as an enigma for research in terrestrial and marine biodiversity.

With an average of ten ongoing annual research projects, the public trust responsible for managing both sites, the Seychelles Islands Foundation (SIF) recently organized a symposium to create awareness among the archipelago's population of 90,000 on ongoing conservation efforts and the public trust's latest discoveries.

A forest of world records

Covering over 19 hectares of land, the Vallee de Mai is one of the main focal points for conservation efforts in the Indian Ocean archipelago, concentrating primarily on the fabled coco-de-mer, the largest nut in the world.

One conservation project undertaken by SIF reflects on the natural elements that allows the majestic trees reaching over 34 metres in height to flourish and produce huge fruits often exceeding 30 kilograms, in what is considered as ‘poor’ quality soil on Praslin, one of the few islands of the Seychelles archipelago where the nuts grow naturally.

The research on the ‘recycling’ trend amongst these stately palms, the regeneration of its nuts and its unique water funnelling techniques have been published in several journals.

Producing just one new leaf every year, the coco-de-mer leaves hold remarkable lifespan of over 50 years, perhaps the longest lifespan of any leaf in the plant kingdom.

Moreover, 3rd-year BSc Environmental Science student Annabelle Constance from the University of Seychelles produced conclusive evidence using data collected from leaves over a period of six years that the growth of coco-de-mer is not affected by changes in rainfall patterns.

“The tests prove that the coco-de-mer increases its growth in the wet season and decreases its growth in dry season… however, the annual changes in leaf growth remains constant which means the declining trend we are seeing is not as significant - yet - but we need to continue to monitor this,” said Constance at the symposium.

Following the recent discovery by experts of Birdlife International that the Seychelles Black parrot is a distinct species, SIF has also boosted its research and protection of this species listed as ‘Vulnerable to Extinction’ by IUCN.

The birds number between just 500 to 900 individuals and are highly susceptible to predation and invasive species.

One SIF study concentrated on the breeding and feeding ecology of the Seychelles black parrot in order to increase knowledge on the national bird of Seychelles, which with their limited habitat, have been known to nest outside of the Vallee de Mai.

“When the breeding season starts in November, we found that the birds did not concentrate on endemic plants which seems to be their favorite food but instead they flew further out to farming areas and residential areas…” says SIF’s Terrence Payet, adding that a highly-anticipated attempt to increase the birds' population by translocating the species to Silhouette Island, the thirld-largest and sparsely-populated island of the Seychelles, was still being finalized.

This attempt has been delayed mainly due to the threat of the ring-necked parakeet on the nearby main island of Mahe.

“To date we have had over 480 birds culled and 416 birds shot and we are estimating that there are less than 50 birds left on the island. With the decreasing number it is becoming harder to find them,” announced Laurent Leite at the symposium.

Leite, who oversees the eradication programme, also added that a possible sighting last year on Praslin of the parrot, known in Creole as ‘Kato Ver’, has until now not been confirmed.

The ring-necked parakeet is the latest of invasive species on a long list of threats ‘closing in’ on the pristine forest of Vallee de Mai and its endemic species, threats which includes mynah birds, yellow crazy ants, as well as a dozen invasive plants, the latter of which have been targeted by SIF in another ongoing eradication project.

“We have removed 2,334 invasive species in over one year, using ring-barking and often herbicides which were drilled in the bark….some trees we’ve had to fell them [prematurely] because they would have posed a danger to the visitors in the Vallee de Mai trails and users of the main roads. We also undertook the removal of the saplings of treated adults,” Dainise Quatre said.

A similar project to eradicate invasive species, particularly aimed at getting rid of recurring sisal (Agave Sisalana) has already been completed on the raised coral atoll of Aldabra, a unique and isolated group of islands in the outlying western regions of the Seychelles archipelago.

The arrival of the invasive sisal, recorded since 1956, coupled with a threatening arrival of invasive birds such as the Madagascar fody and the red-whiskered bulbul, both tasks needing extensive efforts from SIF which coupled with over six other ongoing research in terrestrial and marine environment, has left the twenty or so staff on the atoll limited time on their hands.

One project, however, has been an exhaustive research on how the large endemic population of giant Aldabra land tortoises survives in their arid and extremey hot habitat through the use of recorded GPS tags.

Aldabra also boasts one of the largest nesting places of green turtles, with over five thousand nests recorded annually and the SIF revealed that future plans are in the pipeline to follow the juveniles when they leave the protected areas.

SIF's research and exploration activities on the harsh and inhospitable atoll in 2014 were instrumental in the momentous re-discovery of the Aldabra banded snail last year, which was originally declared extinct in a paper published in 2007, and the latest news, that over one hundred of the pink-banded snails have been identified on the Aldabra island of Malabar, was received jubilantly by those in attendance at the symposium.

With a long history of terrestrial research, the Seychelles Island Foundation, SIF last year initiated a review of its marine biodiversity through a reef mapping project.

“There is a need to expand the protected areas [around Aldabra] which is currently in progress… we have noticed throughout our project that the characteristics of fish community and it’s abundance as well as diversity is unique to the atoll and this is why we think there is a greater need for greater protection of the atoll,” said Phillip Haupt, who was responsible for the marine research conducted last year on Aldabra, alongside his Seychellois SIF colleague, Daig Romain.

As their research projects continue, including the genetic identification of the Aldabra rail as a possible distinct species, SIF has also expressed their hope to bring Aldabra closer to the people of Seychelles.

This will not only be through the annual trip of Seychellois school children to Aldabra, a project widely hailed as a success in education and outreach programmes, but also through a landmark project currently being finalized to build an interactive Aldabra visitor centre on Mahe, the most populated island of the Seychelles.